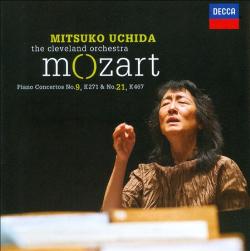 second in Dame Mitsuko Uchida’s new cycle of Mozart concertos with The Cleveland Orchestra features live performances of Nos. 9 and 21 recorded last April 5-7 in Severance Hall (the first recording in the series, including concertos Nos. 20 and 17 won a 2011 Grammy Award for best classical performance).

In his review of one of those live performances last season for this publication, Nicholas Jones wrote, “Sensitive and confident, utterly secure in passage work, energetic and lyrical by turns, she packed these familiar concertos with beauties, pleasures and surprises … Uchida’s rapport with the orchestra shone through the performances, which she conducted from the keyboard. Her style was part of the music’s rhythmic energy — playing a phrase, shooting up from the piano bench, her hands a-flutter as if they were finding notes in space in the active passages or, in the sombre parts, turned palm upwards as if imploring the gods (or the musicians?)”

Except for the visuals, all these characteristics carry over beautifully into the recording. And thanks to digital technology, all the little ambient nuisances (coughs, sneezes, falling program books, fleeting musical mistakes) that can make a live recording interesting as a document but not so pleasurable to listen to several times over have been neatly scrubbed away. Since both Uchida and The Cleveland Orchestra can be counted on to turn in flawless performances, unsullied by accidents or lapses of attention, this disc is probably the closest thing to a studio performance that one can achieve in real time. But because it’s live, the playing has that mysterious presence that sometimes comes up missing if you’re playing to microphones rather than to people.

If you listen, as I did, with headphones, you’ll catch one little sonic undercurrent that doesn’t carry across speakers or very far into the hall during a live performance: Uchida vocalizes ever so subtly under the music during certain passages. Oddly enough, that humanizes the product even a bit more.

(As a footnote, the producer and recording editor for both these CDs is Everett Porter, a CIM graduate who double-majored in oboe and recording technology and now lives and works in the Netherlands).

Perhaps Sony Classical should cop an award for the fastest transformation of a live performance into a commercial recording. Three days after Franz Welser-Möst laid down his baton at the end of the 2013 edition of the traditional New Year’s concert with the Vienna Philharmonic at the Musikverein in Vienna, Sony was offering a digital download of the 2-CD set and planned to release the physical discs on January 22, with a DVD and Blu-Ray release scheduled for February 5.

The twenty-tracks, heavy of course on the irresistible waltzes, polkas, and quadrilles churned out by the Strauss dynasty to satisfy the social needs of Imperial Vienna, include a surprising number of pieces that were turning up for the first time at this New Year’s concert, which has been a fixture in the Austrian capital for more than seventy years. Different conductors are invited to preside over the festivities from year to year, and Austrian-born Welser-Möst, who led the orchestra in 2011 and currently divides his time between Cleveland and the Vienna State Opera, was welcomed back for a second year in 2013. A not-too-distant relative of the Strauss family, Welser-Möst put his personal stamp on this New Year’s Concert by introducing some fourteen New Year’s Concert “premieres”, including selections by Wagner and Verdi.

Franz Welser-Möst grew up with this music and, like the Vienna Philharmonic, knows all the little rhythmic tricks and nuances that make it live and breathe. The orchestral sound is elegant, burnished and old-worldly (listen especially to the brass in Von Suppé’s Light Cavalry Overture).

Unlike Uchida’s Mozart CD, which takes pains to erase the live audience, the New Year’s concert recording welcomes active participation from the assembled crowd. Applause is hearty at the end of each track, and the audience alternately chuckles, guffaws and laughs out loud at the orchestra’s virtuoso antics (and probably at the sight gags that will become clear in the DVD) in Johan Strauss I’s Carnival of Venice Fantasia. It’s all a big musical party.

Everything is a tradition on New Year’s Day at the Musikverein, including the “planned” encores. After a little “Neujahrsgruß”, the orchestra shouts out “Happy New Year” in German and embarks on The Blue Danube Waltz. Welser-Möst and the orchestra cap off the proceedings with Johann Strauss I’s Radetzky March, which gets the crowd happily clapping along. Since it’s such a tradition, they know when to start and stop!