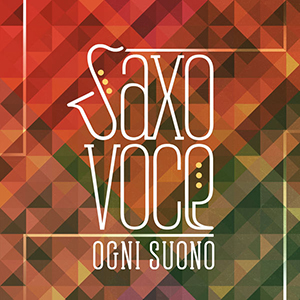 All musical instruments are an extension of the human voice. Even the best keyboard, string, and percussion players know how to create musical lines that breathe. While wind and brass players are keenly aware of how to use air to inflect a myriad of emotions, there is not a lot of music that requires them to incorporate their voices with their instruments. On their new recording, titled SaxoVoce, (to be released on September 7) the inventive saxophone duo Ogni Suono — Noa Even and Phil Pierick — take on the challenge of playing and vocalizing during seven eclectic works. The results are a fascinating blend of catchy technical and rhythmic passages with an array of colorful soundscapes and some intriguing narratives.

You can join Even and Pierick in celebrating their new disc during a free Album Release concert on September 8, at 5:00 pm, at Historic St. John’s in the Hingetown area of Ohio City. The evening will include light refreshments and a discussion about the creation of the album. The event also kicks off the duo’s album release tour which will include stops in Columbus, Washington DC, Baltimore, Philadelphia, West Hartford, Somerville, Mass, and Cincinnati. Click here for dates, times, and locations.

The album opens with Kate Soper’s alluring Ototoi (2015) for two tenor saxophones. The composer describes the music as an “onomatopoetic cry of wild distress and is the first utterance out of the mouth of Kassandra in Aeschylus’ Agamemnon.” Beginning with soft longtones, the piece quickly evolves into raw-sounding cries in the wilderness. Although there are no discernable words, Soper creates a frightening world that Even and Pierick portray with aplomb.

Zach Sheets began writing dare-gale, speaks and spells (2016) for soprano and alto saxophone by recording the performers reading two poems by Gerard Manley Hopkins: The Caged Skylark and As Kingfishers Catch Fire. Sheets writes that he “wanted to work with this innovative poetic language as a musical material, filtered through the voices of the performers themselves.” Here the players are brilliant as their tight, downward spiral passages move in and out of percussive sounds and nimbly through technical passages. Their voices, a combination of air and noise, often verge on beat-boxing.

Christopher Dietz’s My Manifesto and Me (2016) for alto and tenor opens with the players reciting the opening lines of The Rifleman’s Creed: “Please raise your right hand and repeat after me: Before God.” While the composer maintains the creed’s structure throughout the work, he has altered some words and phrases — for example, “my rifle” becomes “my Manifesto.” Dietz inventively interweaves short, rhythmic motives to accent the words of the creed, which Even and Pierick deliver with authority.

The most narrative-driven work on the album is David Reminick’s Walking After Midnight (2017) for alto and baritone instruments. Written in two sections, the piece address the phenomenon of sleepwalking. The text is taken from autobiographical stories of a friend of the composer, the first, “Ghost Story,” is about a four-year old boy’s experiences of sleepwalking, and the Doppelgänger (ghost) whose smile provides comfort and reassurance. Catchy rhythms accompany the words “I am four years old,”  “I smile the same smile back at him,” and, “We fly slowly out of the room.” In the second, “Ordinary Words,” the narrator — now an adult — finds himself in the supporting role of protecting his young son through the boy’s own nighttime terror.

Walking After Midnight is a chamber opera with the players doing the double duty of portraying the characters and providing the accompanying musical score. In his performance notes, Reminick states that “both musicians are asked to sing throughout the piece. Classical vocal training is not required, and musicians should feel free to sing in whatever manner feels most comfortable to them, regardless of their level of training.” Taking this to heart, the performers juxtapose Pierick’s well supported, “classical” sounding voice with Even’s breathier, singer-songwriter approach.

Erin Rogers’ humorous Clamor (2016) for two vocalizing saxophonists on soprano instruments lives up to its name. Opening with the shouting of “one, two, three, four, B-flat,” the players launch into the jazzy music while continuing to blurt out frenzied phrases like “help me I’m trapped in the coffee maker,” and “not sure why he drank three cups of milk,” among numerous other Jabberwockian sentences. Clamor is a fun way to conclude the album.