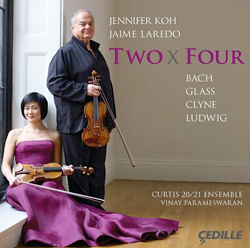 The album begins with a vigorous performance of perhaps the most famous double violin concerto of them all, Johann Sebastian Bach’s Concerto in d, BWV 1043. Laredo takes the first solo part, but the two violinists are so sensitive to each other’s tone and style that it’s often difficult to tell who’s who. That style is quasi-romantic with plentiful vibrato, especially in the slow movement, but sprightly articulations and attention to details abound in the fast outer movements. A harpsichord tinkles away rather ineffectually in the distance.

Philip Glass’s Echorus, written for Yehudi Menuhin and his pupil Edna Mitchell, is, like many of the composer’s so-called “minimalist” works, repetitive and hypnotic. The piece is one of fifteen Menuhin and Mitchell commissioned from as many composers to embrace the theme of universal human compassion. The two soloists (Koh plays first violin) barely rise above the orchestra, playing long notes above undulating textures and echoing each other’s material in complex ways. Echorus fills its seven minute duration pleasantly.

British-born Anne Clyne, composer in residence for the Chicago Symphony, the organization that commissioned Prince of Clouds, doesn’t explain the title, but notes that the 13-1/2 minute work was inspired by the thought of the musical lineage that passes down between generations. The concerto, which features precisely notated vibrato and directs the performers to play “in a baroque style,” begins with high, intertwining lines (Koh plays the top part). The piece evolves into rich, semi-dissonant textures reminiscent of Samuel Barber and suddenly explodes, casting out woozy harmonies like shrapnel and regrouping into intense, dramatic episodes.

The second commissioned work, Curtis-based composer David Ludwig’s Seasons Lost, tells the story “of the time before our winters and summers ran together,” a nostalgic remembrance of the world before climate change set in. The four-movement concerto, commissioned by a consortium of the Delaware and Vermont Symphonies and the Curtis Institute of Music, is an obvious reference to Vivaldi’s famous quartet of concertos.

Ludwig begins with Winter (subtitled Unum), a bleak movement which quotes thematic snippets from Vivaldi and whose descending lines end in a miasma. (Laredo plays first in all movements.) Spring, after a scratchy opening gesture, is sweetly vivacious, with strong rhythms and accents. A languid, nostalgic Summer (Tertius) creeps upward musically with swoops from trios of solo players, leaving the first violinist on a high note.

After a virtuosic dialogue between the two soloists, Fall (Quartus) groups players in quartets to simulate howling winds. A slower, undulating section leads to autumnal, descending lines, a recapitulation and a highly rhythmical section with slap pizzicatos.

In addition to providing the opportunity of hearing two noted violinists who were teacher and student now performing as colleagues, Two x Four also adds richly to the repository of music for two solo violins and string orchestra. The playing is excellent, and the recording, produced by Judith Sherman, engineered by George Blood and edited by Bill Maylone, vividly captures and propagates the quality of the performances.