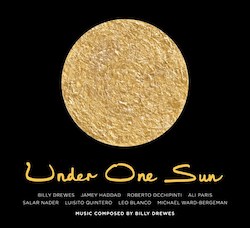 Eight core musicians from three continents gather around the music of Billy Drewes in the latest release on the Oberlin Music label, Under One Sun. The album’s wide array of instruments, moods, and vocal styles makes for a fun and exploratory 70 minutes of jazz.

Twelve of those minutes are devoted to “Walk, Talk – Walked, Talked.” The longest of the album’s nine tracks, it’s also one of the most fulfilling, never in a hurry as it dips from world to world. Quick brush strokes (Jamey Haddad), taps of tabla (Salar Nader), staccato hyper-accordion (Michael Ward-Bergeman), twinkling qanun (Ali Paris), and the growly combination of bass clarinet and trombone (Billy Drewes and Jay Ashby) set up a groove-oozing intro that lets you know that something’s comin’ — and that something is a wild, leaping melody on soprano sax and trumpet (Drewes and Dominick Farinacci).

If that opening says it’s time to go out for some “walk, talk,” five minutes later it’s the end of the night, looking back — past tense. Pianist Leo Blanco, double bassist Roberto Occhipinti, and Haddad set an expressive, nuanced mood, and Drewes adds in alto flute (yet another of the six instruments in his arsenal for this album). An interlude drifts blissfully, then Luisito Quintero sets a new course with his spirited conga playing, leading the group to a beautiful hidden treasure: Jo Lowry’s floating scat.

And that all happens in one piece. Still, the group has plenty of ideas left to go around for the rest of the album. Doubled by tabla, Paris’ seriously quick scat stands out in “Excursions Through a Field of Yellow Daffodils,” a mostly minimalist track that’s easy to get lost in — in the best way. Another highlight is “Tinker,” which shows Drewes, Blanco, and Paris dreaming over a wide-open, night-sky texture.

Drewes & Co. stake out acres of ground that all come together coherently under the umbrella of jazz. Only one of the album’s sonic ventures doesn’t seem to fit: the fine classical-style brass quartet that opens and closes the last track, “Ode to Brigadoon – a Path to All.” But a compromise midway through the tune hits the spot. After Drewes brings the melody into the lovely chalumeau register on his clarinet, the brass players join him and the rest of the ensemble in one more combination of sounds you’ll want to hear again. Under One Sun is available from Naxos, Amazon, and Spotify.

END_OF_DOCUMENT_TOKEN_TO_BE_REPLACED

The strings-only work by Berg has made relatively frequent appearances on the Orchestra’s programs. In 2021, the musicians recorded it for the In Focus series, and it appeared again on last year’s European tour. Friday’s rendition maintained the group’s characteristic light and effortless playing, each section blending as much as possible to echo the work’s original form as a string quartet. At fifteen minutes total, the piece is quite short, but the dense encoded musical meanings require some extra-attentive listening. Splitting up the three movements ensured that each one could be appreciated on its own. END_OF_DOCUMENT_TOKEN_TO_BE_REPLACED