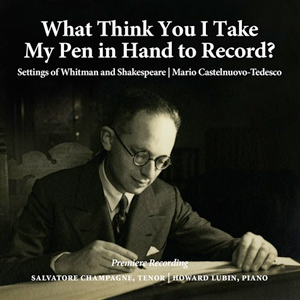 The most striking thing about the album What Think You I Take My Pen in Hand to Record, devoted to the music of Mario Castelnuovo- Tedesco, is not the music itself, though the interpretations by tenor Salvatore Champagne and pianist Howard Lubin are quite lovely. Rather, it’s the presentation: the monumental research, painstakingly curated essays, and obvious care that went into producing the 64-page CD booklet.

Released March 11, 2016, on the Oberlin Music label, the 70-minute disc by two musicians who hold teaching positions at the Oberlin Conservatory of Music is a fascinating exploration of some of the Italian-American composer’s art songs.

The first half of What Think You is a song cycle based on poems by Walt Whitman. The second half is made up of settings of Shakespeare sonnets. All of the lyrics are in English, an unorthodox linguistic choice for a composer whose native tongue is the more mellifluous Italian. But Castelnuovo-Tedesco nurtured a lifelong fascination with the transparency and consonants of the English language, as well as with Shakespeare’s iambic rhythms. The composer’s settings of both Whitman and Shakespeare are stylistically simple, graceful, and devoid of ornamentation or pomp.

As are Champagne’s and Lubin’s performances. Their collaboration is tight, their musical decisions unaffected. Champagne’s diction is impeccable if occasionally a bit percussive, though this is likely a result of the poetry. His tenor has a pleasant fullness and weight. It rarely feels heavy. Songs like We Two Boys Together Clinging and A Glimpse (both on Whitman poems) are nimble, and Champagne handles them easily. Lubin’s playing is strong, particularly in Sometimes with One I Love (Whitman), Shall I compare thee to a summer’s day? (Shakespeare, of course), and When in the chronicles of wasted time (also Shakespeare).

In an album made up exclusively of a single composer’s music, pieces can tend to blur together, and this is the case with What Think You. While Champagne’s and Lubin’s interpretations are delightful for their simplicity and intimacy, there are few moments that stand out above others.

Included in the book are essays by James Westby (Castelnuovo-Tedesco’s biographer), Mila De Santis (a professor at the University of Florence), Aloma Bardi (Italian-born U.S. musicologist, music historian, and translator), and John Champagne (professor of English at Penn State, Erie, and Salvatore’s brother). While the CD book could have benefited from ordering the text of the sonnets according to the recorded tracks, this is a minor quibble. Paired with the music, these writings — alongside beautiful images of the composer and important documents in his career — provide for a genuinely enjoyable foray into this Italian-American composer’s life and work.

END_OF_DOCUMENT_TOKEN_TO_BE_REPLACED

The Orpheus myth inspired French Baroque composers Jean-Philippe Rameau and Philippe Courbois to write expressive solo cantatas about the famous Greek musician-poet and his futile attempts — because of his own impatience — to rescue his beloved Eurydice from the grasp of Pluto in the Underworld. These are beautifully performed by the clear-voiced soprano Hannah De Priest and the velvet-throated baritone Jonathan Woody (who makes a walk-on appearance in the Rameau). END_OF_DOCUMENT_TOKEN_TO_BE_REPLACED

Now that live concerts are beginning to proliferate, it was delightful to hear Oberlin cello professor Darrett Adkins ring a change on the solo suite format with his Hypersuite No. 3 on September 28 in the Cirigliano Studio Theatre at Lorain County Community College. His program opened the new season of Signature Series performances in Elyria, and was dedicated to the memory of Eva Hornyak. END_OF_DOCUMENT_TOKEN_TO_BE_REPLACED