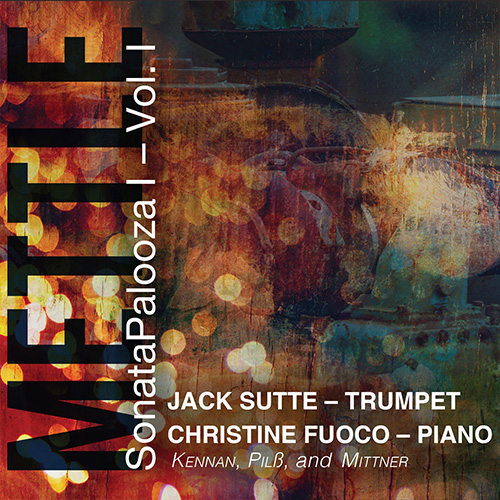 Trumpeter Jack Sutte and pianist Christine Fuoco are on a mission to bring trumpet sonatas into the mainstream classical music conversation, beyond just the dialogue of trumpet players. To that end, they’ve embarked on a long-term collaboration, both onstage and in the recording studio. Mettle: SonataPalooza I – Vol. I is the first disc to come of this project, and represents quite the convincing opening argument.

Combining fanfare and melody, pride and introspection, Kent Kennan’s 1954 Sonata, revised 32 years later, is an excellent opening to the playlist. Its variety of compositional tools and moods not only keeps you consistently engaged, but also shows off several virtues of Sutte’s playing within the first minute or two. His lucid tone, not a hint of strain. His melodic grace. His punchy articulations and smooth legato. And his spectrum of tone colors, from razzle-dazzle to warmth. Meanwhile, Fuoco leaves no doubt about her excellent technique in the first movement, while several solos in the second movement allow her to share her lovely sense of touch, color, and timing.

If the first two movements are a nod to Hindemith, the third brings to mind Bernstein with its playful, offbeat rhythms and accents. Both trumpeter and pianist summon a bounding energy to drive us to an ending that, like the conclusion of an overture, perks your ears up for what’s still to come.

Next in store is a big contrast: the 1935 Sonata of Karl Pilß, whose writing for the piano is grand and Romantic, and whose approach to the trumpet is thoroughly lyrical. Fuoco impresses during the concerto-like passages of the opening movement. And though the material grows slightly repetitive, the third movement comes alive with rollicking rhythms and heroic, soaring melodic lines, not to mention a hint of danger.

Dating from 2001, the newest sonata on the disc is that of Jiří Mittner. It’s easy to see why Sutte, after discovering the work while shopping for sheet music in Vienna, reached out to the composer to ask about its inspiration. Although the piece is not in fact programmatic, it feels like it could be — the language is atmospheric and even picturesque from the start, with a foreboding melody in the trumpet and a deep, lurking passage in the piano. The music grows even more intriguing with the addition of flutter tonguing and the transition into a strange and brilliant staccato march.

The second movement brings long, smooth solos for both trumpet and piano, revealing an interesting contrast — Sutte’s long tones, stoic in their sustained energy, versus the naturally decaying sound of the piano. And once again, the third movement shines, especially for its ending. This is no grand finale, but rather a unique and understated one that caps off this composer’s interests in staccato and silence. If you have any preconceptions about trumpet sonatas, Mittner, Sutte, and Fuoco will help you stow those ideas in a trunk and lock them away for good.

The album is available for purchase from Sutte’s website.

END_OF_DOCUMENT_TOKEN_TO_BE_REPLACED

Franz Welser-Möst led the final bows on Saturday night at Severance, like the star of any show should. The Cleveland Orchestra’s music director is in his element presiding over the ensemble’s annual opera production, which this season packs the drama. Verdi’s Otello — in a concert staging that opened May 21 and runs for two more performances (May 26 and 29) — demands big voices, instrumental forces to match, and a conductor who can give it all shape and direction. END_OF_DOCUMENT_TOKEN_TO_BE_REPLACED

The cimbalom was the feature of the show, an instrument capable of taking on many personas. Its performer, Chester Englander, has shaped his career around the instrument, and has inspired composers to write more repertoire for it, some of which was presented on the program. END_OF_DOCUMENT_TOKEN_TO_BE_REPLACED