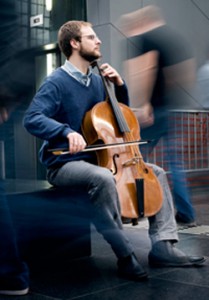 At 5:00 pm on Sunday, July 17, cellist Steuart Pincombe will bring his Music in Familiar Spaces series back to Northeast Ohio for a free performance at Oberlin’s Slow Train Café in cooperation with Credo Chamber Music. The concert, titled Adaptation through form and function, will feature music by Domenico Gabrielli, J.S. Bach, Jean-Louis Duport, and Carlo Alfredo Piatti for cello without endpin using baroque, transitional, and modern bows.

Prior to Pincombe’s stellar performance at Nighttown in March of this year, I spoke to the Oberlin graduate by telephone from his camper — which had been home for the cellist and his wife Michelle for the past six months.

“Living in the Netherlands was great,” Pincombe said. “My career as a soloist and chamber musician was going well but I didn’t feel like I was having a life. So Michelle and I decided to do this tour where we can work together doing something we care about: making beautiful music accessible to everyone.”

Pincombe said it was while figuring out the logistics of the tour that they got the “crazy idea” of turning an old trailer into their home for a year. “It’s a 19-foot, shiny aluminum camper from 1959. It might have been easier to get a more modern one, but this allowed us to convert it into a peaceful, beautiful space with an all-wood interior. I had about a month to make it functional for full-time living, then we literally jumped on the bandwagon.”

Giving credit to Michelle for pulling the tour together, Pincombe noted that they began by crowdsourcing in order to find out who might be interested in the tour and where they were located. “Michelle gathered all of that information and sent out descriptions about some of the different programs we were offering. The response was quite good.”

All of the programs being offered have been developed with specific venue types in mind. Presenters can choose from concerts of solo cello as well as collaborative offerings. “I’ve tried to create themes that relate to the spaces,” Pincombe explained. “Bach and Beer is specifically designed for breweries, while Adaptation is more suited for house concerts or cafés.”

An adventurous program, Silence/noise, features solo cello repertoire by Berio, Lachenmann, and Xenakis interlaced with pre-recorded audio of John Cage, Morton Feldman, and others talking about how to listen. “This one is a little harder sell than Bach and Beer,” Pincombe joked.

A popular collaborative program has been Wondrous Love (violin, cello, voice, and reader). “We just performed this in Bloomington and Goshen, Indiana. It features spirituals and music from the Shape Note tradition and is relatively simple for Michelle and I to pull together. We’ll try to bring in a violinist from the area and have a full day of rehearsals and the concert. This is a perfect program for churches.”

All of Pincombe’s programs have been created not only for specific spaces but also with a mind toward connecting with the people who use those spaces. “Every concert is performed without intermission, and the entire tour is name-your-own-ticket-price, which has been working out really well. We just want people to be comfortable, and choose what it’s worth to them. But no one has to worry, we’re not going to shake anybody down.”

With so many details to take care of every day, how does the cellist find time to practice?  “Good question,” he said with a laugh. “Michelle and I try to figure out our schedules so that we don’t stretch ourselves too thin. It’s a lot of work just parking the camper: finding the location, backing in, and stabilizing it — all the stuff that’s behind the scenes. But in terms of practice, I’ve been working on efficiency, so I focus on the parts that need to be worked on, and I know that when I’m onstage I’ll be able to make it musical.”

Currently the Music in Familiar Spaces tour is in its sixth month with six more to go. After Cleveland it heads to the East Coast with performances in Boston, New Haven, Washington, D.C., Philadelphia, Delaware, and Vermont. The Pincombes will wrap things up on the West Coast with stops throughout California, Oregon, and Washington. “We figured that one year would be about as much as we could handle, and I think we were right,” Pincombe said. “It’s great, it’s awesome, and it’s encouraging to see the audiences respond so well. It’s a lot of running around, but that’s being on tour. There are ten different programs, and maybe that’s a bit ambitious, but so far it’s going well.”

As far as living in a camper, Pincombe said it’s working out nicely. “When I was growing up, my family had a 1985 Volkswagen camper bus. I wanted to take it to Oberlin so badly, but my dad said that he knew if he allowed me to take it, I would live in it, so maybe this is some sort of payback.”