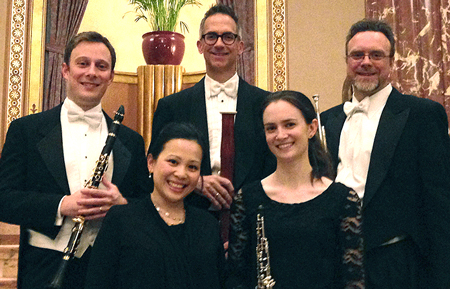 It was a bright, crisp winter afternoon this past Sunday – a good day to be out and around – and many people decided to take advantage of the mild weather to almost fill Pilgrim Church on W.14th Street, for a very attractive chamber music concert sponsored by Arts Renaissance Tremont.

Four of the five performers (Mary Lynch, oboe, Robert Woolfrey, clarinet, Barrick Stees, bassoon, and Richard King, horn) are either current or former members of The Cleveland Orchestra. Cicilia Yudha was guest pianist. The four works on the program showcased various combinations of instruments, the whole group gathering only at the end of the concert for Beethoven’s Quintet in E-flat Major, Op. 16.

Carl Reinecke’s Trio in A Minor, op. 188, for piano, oboe, and horn, opened the program. Reinecke was a contemporary of Brahms and Dvořák who died in 1910, outliving them both. The four-movement trio is full of gracious melodies, sometimes resembling folk songs and appearing mostly in the oboe and horn parts. The piano plays a more accompanimental role, in stark contrast to the Beethoven quintet, in which all of the players are equal partners.

The ensemble was poised, and balances were well-aligned among the musicians. Mary Lynch, formerly second oboe of The Cleveland Orchestra and now principal in the Seattle Symphony, and Richard King, currently fourth horn of TCO, showed mastery of their respective, difficult instruments. King played with gleaming tone. Cicilia Yudha was the only one to appear in every work on the program, and she did so with virtuosic facility and sensitive collaboration throughout. She was in some ways the star of the afternoon.

Beethoven’s Trio in B-flat Major, Op. 11 (‘Gassenhauer’) for clarinet, bassoon, and piano, is an early work, composed in 1797. It takes its nickname from the theme of the third movement set of variations on a wildly popular melody (a ‘street song’ or “Gassenhauer’) from a 1797 opera by Joseph Weigl. (By contemporary analogy, imagine a chamber work by John Adams based on a Lady Gaga song!) Beethoven’s music displays much more interaction among the instruments than that of Reinecke.

The first movement featured intricate virtuoso passages all around. Barrick Stees played the opening theme of the second movement with a mellow tone. When it was later repeated in the clarinet, Robert Woolfrey matched Stees for warmth. The third movement begins with a simple statement of the theme, then progresses to ever more complex variations, in many tempos, moods, and instrumental combinations. The last variation, with its off-kilter rhythms, was especially brilliant.

After what seemed like an overly long intermission, Woolfrey and Yudha returned for a zippy reading of Francis Poulenc’s 1962 Clarinet Sonata. It is a mercurial work, with abrupt changes of mood and texture, calling for the soloist to play in the extremes of the instrument’s range. Though pitfalls abound, Woolfrey played with precision, unfailing intonation, clarity of dynamics and an unerring sense of the piece’s “Frenchness.”

The sonata was written the year before Poulenc’s death, and he seems to have borrowed freely from earlier works for bits and pieces of the melodic material. An ascending passage in the first movement matched almost note-for-note a similar phrase in Poulenc’s 1956 opera Dialogues of the Carmelites, and others also had a familiar sound to them. Woolfrey’s real achievement was blending the sonata’s many moments into a unified whole.

All of the players gathered for a splendid performance of Beethoven’s Quintet in E-flat Major, Op. 16, to close the concert. The quintet is another early Beethoven work, but it shows his mastery of motivic development, and calls for a truly diverse interaction among the players. The piano part is a technical showpiece, but there are challenges for each of the other instruments. Cicilia Yudha’s opening of the second movement was a model of control, presenting the theme, which is then taken up by the other instruments, as a chorale.

The pianist’s part in the third movement rondo was equally complex, with streams of scales and arpeggios filling in around the wind instruments. Everyone’s playing was very fine, and the quintet was deservedly the highlight of the program. This afternoon’s concert was another big win for the organizers of Arts Renaissance Tremont.