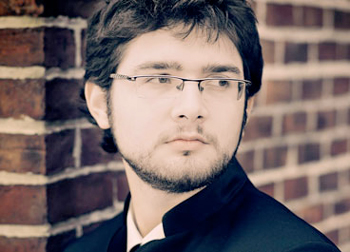 The fifth in a series of articles highlighting ChamberFest artists

“ChamberFest is very special,” pianist Roman Rabinovich said during a telephone conversation from Wales, where he was performing three solo recitals. “It’s not a generic festival at all. It has such a warm atmosphere, and such interesting programming. This will be my third Festival, and I’m really looking forward to it.”

Tonight, June 20 at 8:00 pm at Dobama Theatre, Roman Rabinovich will make his first 2016 ChamberFest Cleveland appearance during “Movie Night” when he teams up with pianists Marat Portan and Orion Weiss for some comical and lighter works, including Sousa marches and a piece for piano six-hands. “All three of us are really good friends, so it’s going to be a fun night.” The concert will also include the screening of the 1928 Buster Keaton silent film Steamboat Bill, Jr., with improvised accompaniment by Marat Portan. Composer-accordionist Merima Ključo will start things off with performances of Jukka Tiensuu’s Aufschwung (“Upswing”), and Ključo’s own Ihtimanska Kopanica (“Little Digging Dance”). Popcorn and beverages will be served.

During a concert titled “Obsession” on Friday, June 24 at 8:00 pm at Mixon Hall, Uzbekistan-born Rabinovich will join with violinists Diana Cohen and David Bowlin, violist Teng Li, and cellist Julie Albers for a performance of César Franck’s piano quintet. “This is one of my favorite pieces. If you like Romantic music, this is a piece that’s impossible not to love. It’s highly emotional, very intense, heartbreaking, and thrilling. It’s a piece of extremes, and virtuosic for everyone.”

Rabinovich and Orion Weiss will come together for Ravel’s original piano four-hands version of his Mother Goose Suite, as part of “(Fairy)tales and Tales of the Macabre” on Saturday, June 25 at 8:00 pm at Harkness Chapel. “This is such a beautiful piece, and I can’t wait to play it with Orion.”

Another side of the multi-talented, Curtis- and Juilliard-trained pianist can be heard on Tuesday, June 28 at 8:00 pm in Mixon Hall during Rabinovich’s arrangement of Sergei Prokofiev’s Suite from Romeo and Juliet for two violins, viola, cello, bass, clarinet, horn, trumpet, percussion, and piano. “The program is titled ‘Shakespeare,’ so we thought, why not play the Prokofiev? I arranged it especially for ChamberFest. It’s been a fun process, and I can’t wait to hear it.”

Rabinovich is also an accomplished visual artist and often will combine his concerts with exhibitions of his paintings. “As a kid I was always sketching on a notepad. It was kind of a compulsion,” he said. Did he ever have aspirations to pursue painting as a career? “Yes, I was considering it, but music took over, although I never did give up painting. It’s not my main focus, but I am very serious about it.”

What’s in store for him in the near future? “I’m going to embark on a Haydn sonata project. I’ll be playing 24 of the sonatas for recitals in Israel and Scotland during September. I’m planning to play all of them over a three-year period. Many pianists shy away from Haydn’s keyboard works, but I think they’re beautiful — incredibly inventive, funny, deep, and everything in between. Maybe because people play them as children, they think it’s not worth the effort as an adult. But it is actually very difficult music and more experimental than Mozart sonatas.”

Music director and conductor Daniel Meyer built his playlist around Cleveland themes and scenes. “Exploration CLE” made use of engaging selections from the classical canon and beyond that celebrated “what makes Cleveland so special.” Happily, he and his musicians avoided constructing a visual slide show, choosing to let the music speak for itself. END_OF_DOCUMENT_TOKEN_TO_BE_REPLACED

You could see the relationship at work on a practical level. Repertoire for two players at the same piano requires a certain choreography. There’s just one of each pedal to share, and the hand crossings left and right — which can be so fun to watch a soloist pull off — get more complicated when another person’s involved. At times, Pompa-Baldi drew a hand away from the keyboard and into his body, making room for Friscioni, and at the close of a few delicate phrases, the two were crouched together over the same final notes at one end of the instrument. END_OF_DOCUMENT_TOKEN_TO_BE_REPLACED

The signature sounds of these famous film scores are not so much John Williams’ invention as allusions to other classical pieces. The foreboding half-step from Jaws, growing more and more furious in the cellos and basses, shares something with Dvořák’s “New World” Symphony and Bartok’s Miraculous Mandarin. END_OF_DOCUMENT_TOKEN_TO_BE_REPLACED