He joins ChamberFest to play some Romantic masterworks, “some of the best chamber music out there and some of my favorite pieces to play:” Brahms’s piano Quintet, Dvořák’s E-flat piano quartet, and Tchaikovsky’s “Souvenir de Florence” sextet. Beyond those pieces, he’ll also perform two pieces for the first time. “I’m very much looking forward to working with [pianist] Orion Weiss on the Janáček violin sonata, it’s a really wonderful piece,” he said. Osvaldo Golijov’s Last Round for double string quartet and bass, on ChamberFest’s final concert, is also new to him.

And then he’s off to continue his rising star-career. But there’s a good chance he’ll be back: “We’re all at ChamberFest because we love doing it. It’s work, but it’s not really work. It’s one of my favorite parts of the summer, definitely.”

The Chinese “ghost opera” tradition extends more than four thousand years into the past. It also reaches forward into the future, outward into nature, and inward into the spirit, allowing communication across all of these states.

Tan Dun’s Ghost Opera adds another aspect to that dialogue: culture. The past is represented not only by a Chinese folk song and monastic chanting, but also by a quotation from Bach and text from Shakespeare. These intermingle in a cross-cultural exchange while communing with nature and eternity in the form of natural objects for a meditation on spirituality. More cultural and sacred mixing is encoded into the instrumentation: a string quartet is required to recite text and play stones, gongs, paper and water, while a pipa player must also sing. (The pipa is a lute-like Chinese instrument with four strings).

Beyond the dialogues written into the music, ChamberFest’s performance of Ghost Opera transcends additional boundaries in a cross-disciplinary collaboration with GroundWorks Dance Theater. Five dancers from the Cleveland-based company will perform world premiere choreography by GroundWorks Artistic Director David Shimotakahara to Tan Dun’s music in the Cleveland Institute of Music’s Kulas Hall on June 28. 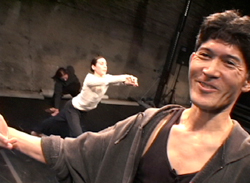 From his first hearing of Tan Dun’s Ghost Opera, David Shimotakahara immediately felt it would be a great work to choreograph. “When I saw the premiere by the Kronos Quartet and Wu Man on YouTube, I didn’t know what it was, but I felt it was something for dance. Their performance was so wonderfully theatrical, and the score has so many contrasts that I immediately started imagining.”

Shimotakahara admits that before this project he was not terribly familiar with Tan Dun’s music. “I knew of him and of his movie scores but I wouldn’t say that I was familiar with his music. I think he really understands how to mix the Eastern and Western traditions in his music.”

Saturday’s performance will mark the first time that ChamberFest has included dance on a program. The decision to collaborate came quite late in the festival’s planning process. “It’s to [organizers of ChamberFest] Jacqui, Frank and Diana’s credit that when I expressed my enthusiasm for the music they decided to move forward with the project. They had never produced dance as part of the festival, so it’s great that they did decide to take it on. I think they took some comfort with the fact that GroundWorks is experienced at producing in different locations. It’s something we do all the time and I know they’ll take care of the musical end so it’s an excellent partnership.”

Shimotakahara is a celebrated choreographer who has a lot of experience in choreographing music that was not originally meant for dance. So how does he approach adding his own creation to someone else’s work? “I don’t always look for the same elements in a piece of music. Whether I’m exactly on the same track as the composer and if the music moves me in a particular way, then I know I can work with it. But there is something about Ghost Opera that really captured my imagination.”

Shimotakahara said that he strongly feels the piece is like a dreamscape. “Tan Dun talks about his experience with the nuo tradition and the idea that everything is a spirit. I think that was kind of the starting place for him to bring together the Western tradition, the past, the present and the elements from nature which are very much a part of the nuo tradition. And for me this became a wonderful metaphor for our time on earth. It’s such a short time but we intersect with so many things and people and experiences. That’s how I connected with this idea of the ghost opera.”

The choreography also draws on Shimotakahara’s experiences with Chinese film. “They have this wonderful sense of the surreal and the magical and how the concept of time is so different. They can jump from complete fantasy to reality. It’s especially evident in those wonderful Kung Fu movies. I see some of that in the way Tan Dun’s score is put together. It’s so cinematic. There are portions that I decided not to choreograph. Because of the way it is written there are parts the need to feature the physicality of what the musicians are doing. I think that’s an important part of the whole mix of what will happen on stage.” 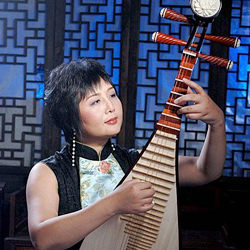 Pipa player Gao Hong looks forward to performing Tan Dun’s Ghost Opera. “I think it’s a very interesting piece and the words are beautiful,” she said during a recent telephone conversation from her home in Minneapolis. “I also look forward to being back in Cleveland. I last performed there in 1994 and I really like the city a lot.”

Hong explained that a ghost opera is a very traditional funeral service, but unlike a Western funeral, the Chinese service can last anywhere from three to seven days. They are also celebrated differently in different provinces. “Tan Dun has used many types of local music and traditions in this opera, for example the folk tune ‘Bok Choy.’ You can feel the music, see it, and hear it.” Hong finds Tan Dun’s music like a scene in a scary movie when something horrible is about to happen, but there is a children’s song playing in the background. “It’s beautiful but very haunting.”

What led Gao Hong to the pipa?  “I was born during the Cultural Revolution. My mom was a music teacher and my father was an artist who was blacklisted,” she said. During that time, after graduating from middle school many children were sent to the countryside to work. “My mom said that my only hope was to become a professional musician. So she made me play all these different instruments, starting with the accordion,” she said, laughing. After she tried a number of instruments, her mother eventually suggested the pipa. “She told me that because the pipa is so difficult, fewer people play it, so it would be easier for me to get into a professional group. So I joined a group at age twelve and have been traveling as a musician ever since.”

Prior to her performance of Ghost Opera, Gao Hong will perform one of her own compositions during ChambeFest’s June 25 concert at the Wine Spot. She describes Flying Dragon as an autobiographical work. “I told you the story about my mother and why I began playing the pipa and ever since I feel I have spent my life being a flying dragon.”

Was she always interested in composition? “Not really,” she answered with a laugh. “It was not until I came to the United States. One day I was playing around and my husband, who is a composer, said ‘wow, that is really interesting, who wrote that?’ And I said ‘I wrote that.’”

But Gao loves composing multi-cultural collaborations, with a work for pipa and guitar as well as a string quartet and a piano trio. Later this summer the Minneapolis Pops Orchestra will premiere her Double Concerto for Pipa and Violin. In spite of her success with composition, she still does not consider herself to be a composer. “I’m not really a “composer” composer, I’m more like a performer who puts my feelings into music.”