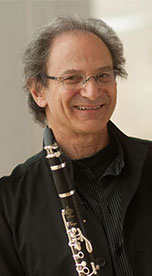 It’s wonderful to hear great chamber music performances in a concert hall, but it’s an entirely different experience to hear it in someone’s home with light appetizers and your favorite beverage.

“As I get older I’m really enjoying situations where the audience is five feet away from you and you can feel everyone’s energy,” clarinetist and ChamberFest Cleveland co-artistic director Franklin Cohen said. “There’s something very special about that environment that I can’t even describe — it’s a wonderful thing.”

On Friday, March 8 at 7:30 pm, ChamberFest Cleveland will present the Cohen Candlelight House Concert, featuring Franklin Cohen and the Callisto Quartet. The program will include Ligeti’s String Quartet No. 1, “Métamorphoses nocturnes” and Mozart’s Clarinet Quintet. Light appetizers and beverages will be served after the concert. Tickets are available online, and the address will be provided upon purchase.

Cohen said that the House Concert Series provides the perfect opportunity to present “a local ensemble that has received national recognition.” Formed in 2016 at the Cleveland Institute of Music, the Callisto Quartet — Paul Aguilar and Rachel Stenzel, violins, Eva Kennedy, viola, and Hannah Moses, cello — were the grand prize winners of the 2018 Fischoff National Chamber Music Competition. Additionally, in 2018 they were prize winners at the Melbourne and Wigmore Hall International Chamber Music Competitions. The ensemble is one of six quartets that have been invited to the 2019 Bordeaux International String Quartet Competition. 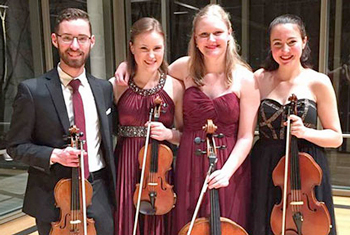 “I knew Hannah when she was a student,” Cohen said, “but when they became prize winners at the Fischoff last year, I watched some videos from the competition and thought, wow! We always hear about the outside groups that are coming to town, but they’re right here in our backyard, so it was a no-brainer to invite them.”

When asked about the evening’s program, Cohen said that he “loves” Ligeti. “When I spoke to Hannah, she told me they were working on his first string quartet. I said, can we please put that on the program?” Cohen also looks forward to collaborating with the Callisto on a piece that “everybody loves,” Mozart’s Clarinet Quintet.

“I first played it as a student at Juilliard and I’ve probably performed it more than any other piece in the world — except for the Bartók Contrasts which I started playing when I was fifteen with Garrick Ohlsson. But people love the Mozart, and what better environment to hear it than in a house with friends and a little vino?”

Over the years, Mozart’s sublime quintet has become very close to Cohen’s heart, beginning with his first season as principal clarinet with The Cleveland Orchestra. “I came to Cleveland in my late twenties, and one of the first things that happened was that my brother passed away. He loved music, and even played clarinet, so I played it at his funeral. Over the years I’ve been asked to play it at many people’s memorials — for my brother, my mother, my father, and my late wife — for a lot of people that I love.”

Cohen said that what makes the work so special is that it has the perfect balance of optimism and something a little bit hard to describe — “what one would imagine if there is anything after this world, and how beautiful it could be. That’s how I always thought about this piece. I don’t mean to be morose, because it is one of the most joyful pieces in the repertoire. Brahms thought it was such an incredible piece of music that his own clarinet quintet is an homage to Mozart. The connections between the two pieces have been linked for years.”

Wrapping up our telephone conversation, Cohen said that Friday’s concert is all about the Callisto. “It’s going to be fun, and maybe I’ll learn something from them. I like it when things go in the direction of the young people teaching me new things — it makes me a better teacher.” He also noted that there will be a surprise addition to the program. “But I’m not even going to tell you what it is,” he said with a chuckle.

END_OF_DOCUMENT_TOKEN_TO_BE_REPLACED

Concerts cancelled in 2020 may have put a brief gap in Ling’s record with the Orchestra (a program every season since 1984-1985), but the ensemble’s former resident conductor more than made up for it Sunday with a performance both commanding and personal. END_OF_DOCUMENT_TOKEN_TO_BE_REPLACED