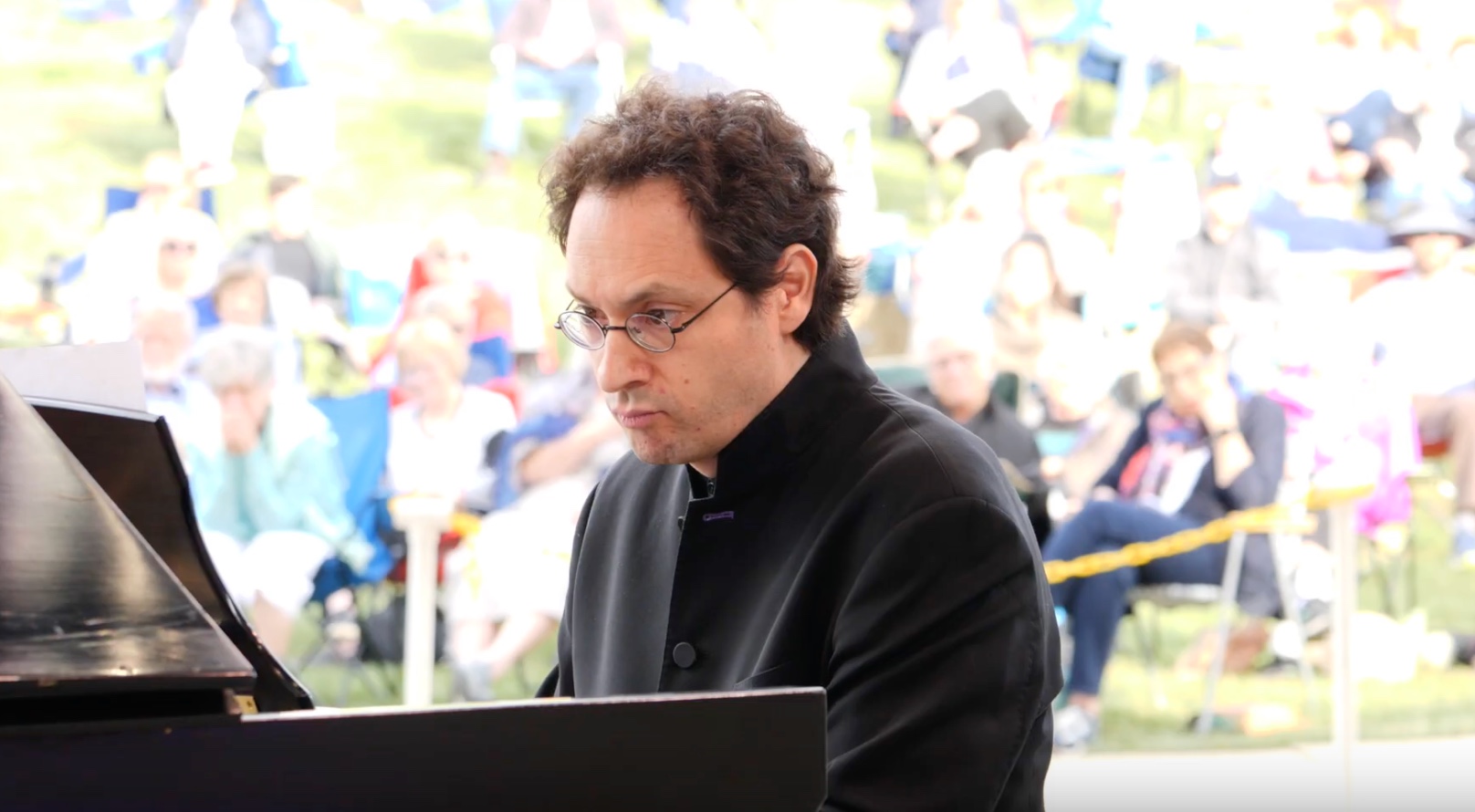 On Wednesday, June 16 at 7:00 at The Grove Amphitheatre, ChamberFest’s theme of the evening was Luscious Soundscapes and included music by Richard Strauss and Amy Beach.

However, it was pianist Shai Wosner’s imaginative interweaving of sonatas by Italian Baroque composer Domenico Scarlatti with sonatas by American composer Frederick Rzewski that got things off to a fascinating start.

During an interview with this publication, the pianist said “The Nanosonatas are almost like a stream of consciousness, but I hear that in the Scarlattis as well.” Throughout, Wosner played with crisp, clean articulations, tight trills (in the Scarlattis) and solid, rhythmic drive. He also had a wizardly way of making Rzewski’s music evolve out of Scarlatti’s.

The centerpiece of the program was Richard Strauss’ Violin Sonata in E-flat, brilliantly played by violinist Diana Cohen and pianist Roman Rabinovich.

The composer’s singular violin sonata, the work is transitional in the young composer’s oeuvre — he was moving away from classical chamber music toward symphonic tone poems. In the opening Allegro ma non troppo — fast but not too fast — Cohen and Rabinovich took Strauss at his word. 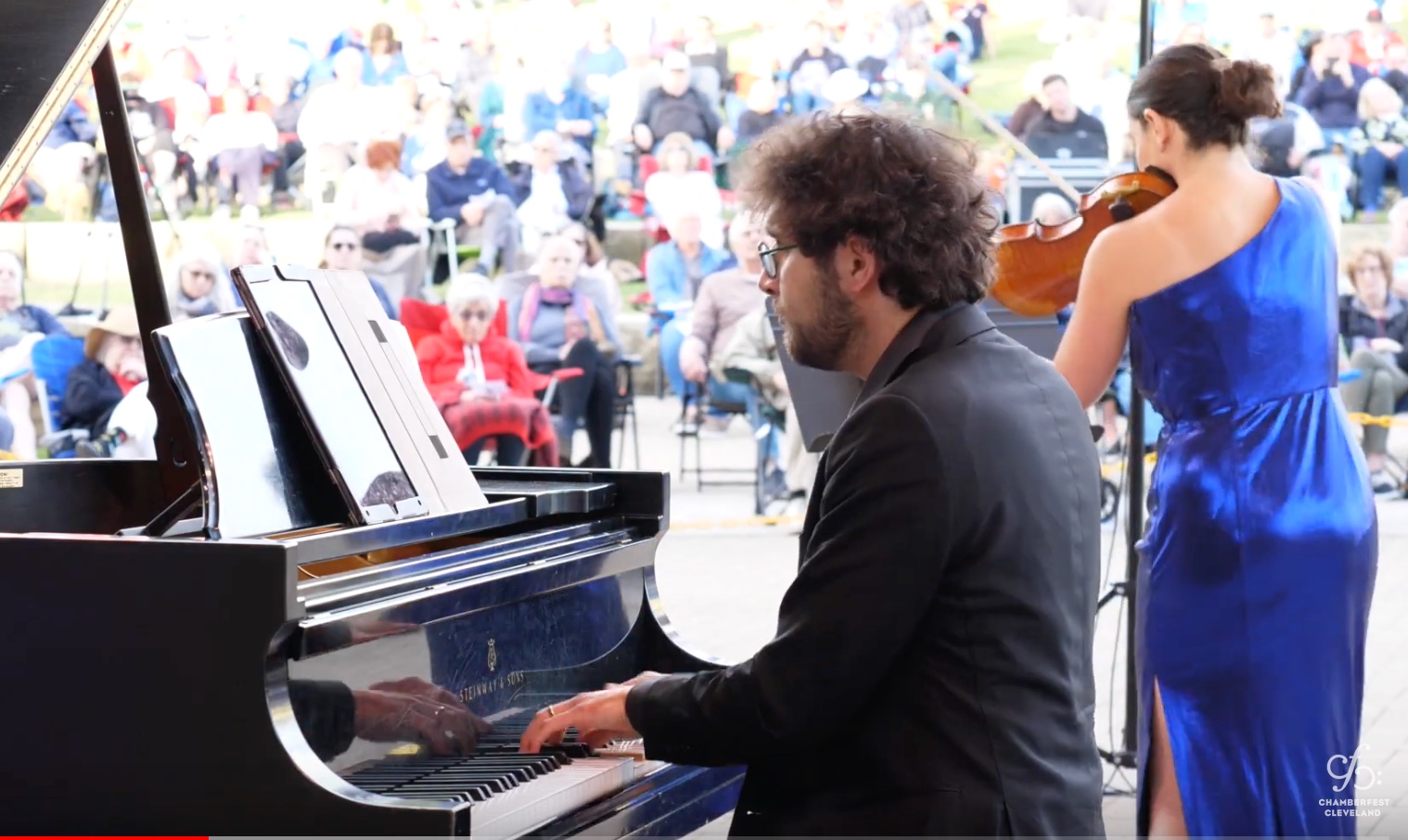 During the long opening piano motif, no phrase was rushed, allowing the passionate violin lines to come through. Dramatic outbursts were full-bodied while lyrical moments were intimate. The beautiful Andante cantabile became a heartfelt song without words, its middle section crying out with love.

Beginning with a slow introduction in the piano, the Finale explodes into a series of long, episodic lines. An extended coda brought the work to an exciting conclusion. Cohen and Rabinovich gave an arresting performance that achieved symphonic proportions while not neglecting the movement’s introspective passages.

A prime example of the grandness of American Romanticism, in the hands of less seasoned players, the work can feel like too much of a good thing. Luckily that was not the case with this ensemble. The opening movement was defined by long, luscious unison lines in the strings. The soft opening of the Adagio espressivo gradually became heart-wrenching as it blossomed into symphonic proportions.

By the middle of the long third movement the temperature was cold, but somehow the ensemble found a way to play with bravado, summoning ever richer, more robust sounds with each phrase  — always beautiful, never blemished.

END_OF_DOCUMENT_TOKEN_TO_BE_REPLACED

Then, you heard all the qualities that make for a stunning soloist. Winner of the 2013 Cleveland International Piano Competition, Khristenko was back in town this month for a recital in Piano Cleveland’s summer series, Piano Days @CLE. And he couldn’t help but revel in the spotlight a little, even as he settled into a more collaborative role at the keyboard for his program, “Stanislav and Friends.” END_OF_DOCUMENT_TOKEN_TO_BE_REPLACED

Now, both pieces on Saturday might be called one thing, but they really sound like another. “Symphony” is a title that would fit Sergei Rachmaninoff’s Piano Concerto No. 2, as well as John Adams’ modern masterpiece for orchestra, Harmonielehre. END_OF_DOCUMENT_TOKEN_TO_BE_REPLACED

And the Orpheus effect has everything to do with who’s not onstage. The New York City-based group has rehearsed and performed without a conductor since its founding in 1972, and this means its members share the musical authority that typically rests with one person. Multiplied by a dozen or so, the interpretation of a piece suddenly emanates from every player, from the concertmaster to the double bass, resonating with a kind of collective power. END_OF_DOCUMENT_TOKEN_TO_BE_REPLACED