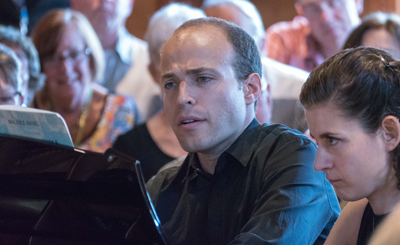 Music for four hands on one piano has usually been a parlor game rather than the subject of public performance. Composers dabbled in that genre to satisfy an enthusiastic market of amateurs who wanted to amuse themselves and friends at home — and arrangers made versions of chamber and orchestral music so that musicians could study repertoire before the advent of sound recording. But Orion Weiss and Anna Polonsky’s refreshingly informal performance of music by Dvořák, Debussy, Schumann, Ravel, and Fauré at Dunham Tavern on Sunday afternoon, June 28 made a terrific case for four-hand music as a recital vehicle in its own right.

The pianists began with an off-the-program performance of one of Antonín Dvořák’s Op. 72 Slavonic Dances, “a slow dance for two people,” Polonsky explained, laying the groundwork for a series of lighthearted remarks about the music and suggesting how its performance by a married couple added a special dimension. It certainly did in the opening work. Weiss and Polonsky mirrored each other’s every musical move and nuance. And like a good comedy team, the two pianists made light of the noisy shifts of benches when they switched ends of the piano. (“She likes to sit higher,” Weiss quipped.)

Playing a Yamaha concert grand set in the middle of Dunham Tavern’s barn, Weiss and Polonsky turned next to Claude Debussy’s Marche ecossaise sur un theme populaire, “which is really not a march at all,” Polonsky said. Something more like a fantasy on Scottish tunes suggested by its commissioner and associated with Clan Ross, the charming piece was easy to listen to, but obviously grew more difficult to play, where Debussy dials up the tempo to conclude it with a Scottish scherzo.

Polonsky and Weiss provided tag-team commentary before Robert Schumann’s Bilder aus Osten, six “impromptus” based on Friederich Rücket’s version of an episode from the 14th-century Persian poet known as Hafiz. While Schumann’s “Pictures from the East” are thoroughly German and make no attempt to incorporate exotic gestures, they’re varied and lovely, moving between moods ranging from the agitated to the exalted. 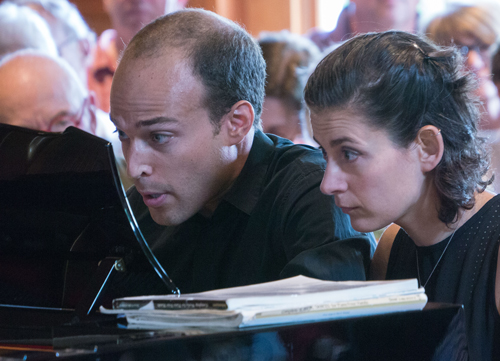 Having established their credentials as superb collaborators up to this point in the concert, Polonsky and Weiss confirmed both their excellent teamwork and their individual virtuosity in a colorful performance of Maurice Ravel’s Rapsodie espagnole. They made the “Prélude à la nuit” that opened the four-movement suite shimmer with mystery. In the two dance movements that followed — “Malagueña” and “Habanera” — Polonsky and Weiss perfectly evoked the proud Iberian spirit. The finale, “Feria,” captures the whirling sounds of a fair, and the two pianists put that busy scenario across with élan. (Tagging onto Polonsky’s pre-Rapsodie remarks, Weiss noted that Ravel had dated the “Habanera” to make sure it was clear that he and not Debussy had been the first French composer to write a piece in that form.)

Going off-program for the second time, Polonsky announced that she and Weiss would now insert “Le jardin de Dolly” from Gabriel Fauré’s Dolly Suite, coyly supplying a few hints about who little Dolly’s mother was. Continuing the afternoon’s running banter, Weiss stepped in to clarify that Dolly was indeed Fauré’s mistress. After that good-natured backchat, their playing was winsome and elegant.

The concert ended not with multiple selections, as advertised, but a single piece from Dvorak’s Slavonic Dances, Op. 72. “You’ll know this one,” Weiss said, before the two pianists tore into a thrilling reading of No. 8 in g minor.

The audience, who completely filled the folding chairs set up in four quadrants around the performers, called for more. Weiss and Polonsky put their heads together — then only three of their hands — for a tiny little Abendlied by Robert Schumann. By the end of this 90-minute program, Cleveland’s stormy skies had cleared and the audience emerged into glorious sunshine. What better way to spend a Sunday afternoon?

END_OF_DOCUMENT_TOKEN_TO_BE_REPLACED

Rodgers & Hammerstein’s Cinderella was originally produced for television in 1957 — seven years after the animated Disney film was released — and starred Julie Andrews. According to the Rodgers & Hammerstein website, it was viewed by over 100 million people. END_OF_DOCUMENT_TOKEN_TO_BE_REPLACED

The story line has its origin in an 1855 play and an 1842 farce that Thornton Wilder mined for his 1938 play The Merchant of Yonkers. When that turned out to be a flop, in 1954 Wilder made the crucial decision to re-center the show around the character of the legendary marriage broker Dolly Gallagher Levi and renamed it The Matchmaker. END_OF_DOCUMENT_TOKEN_TO_BE_REPLACED

The Dodero Center for the Performing Arts at the Gilmore Academy in Gates Mills is one feature of an impressive campus. The auditorium is shallow, the stage is deep, and the ensemble played without a shell. Throughout the program, the sound, especially in instruments’ lower registers, tended to disappear. END_OF_DOCUMENT_TOKEN_TO_BE_REPLACED