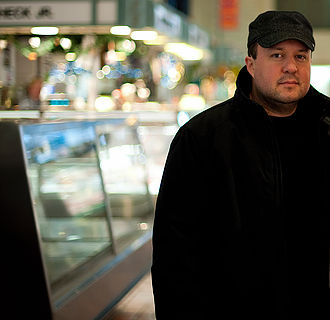 The eighth in a series of articles highlighting ChamberFest artists

Igor Stravinsky’s L’Histoire du Soldat (“A Soldier’s Tale”) tells a timeless parable about a young soldier who sells his fiddle — and his soul — to the devil in order to achieve unlimited gains in life. On Saturday, July 2 at 8:00 pm at the Maltz Performing Arts Center, ChamberFest Cleveland will present Stravinsky’s groundbreaking work on the final concert of the festival.

Narrated by Dorothy Silver, this new production will feature life-sized puppetry, created and performed by Talespinner Children’s Theatre, and will include video mapping technology by T. Paul Lowry. Click here to watch a video of ChamberFest co-directors Franklin and Diana Cohen talk about this not-to-be-missed show.

Stravinsky’s music will share the program with Eric Ewazen’s Philharmonic Fanfare, Antonín Dvořák’s String Sextet in A, and J.S. Bach’s “Agnus Dei” from the Mass in b minor, in an arrangement for trumpet, violin, and bass by Brandon Ridenour. If you’re 17 or under, you get in for free, and Mitchell’s Ice Cream will be provided for all ages following the performance.

“This is going to be a great way to end the festival,” T. Paul Lowry said during a telephone conversation. Lowry (pictured above), who is serving his second year as ChamberFest’s production manager, said that Franklin and Diana Cohen originally approached him about producing L’Histoire entirely with digital imagery. Audiences may remember the superb projections Lowry created for Franklin Cohen’s performance of Steve Reich’s New York Counterpoint for amplified clarinet and tape during the 2015 ChamberFest. That project served as a starting point for the Cohens and Lowry to discuss visual aesthetics.

“I’ve got a background in theatre, but I’ve never seen the piece live, so I had to rely on YouTube videos to get a sense of what had been done before,” Lowry said. “For the Reich I just wanted to complement the notion of being in New York City. But as I listened to, read, and watched versions of the Stravinsky, I came to the conclusion that it required a connection to the audience that projections wouldn’t be able to provide without an immense amount of work. I’ve recently done a lot of theatre for young audiences, and as I was listening to the piece, the idea of puppetry popped into my head almost immediately.”

Lowry said that he tried to locate versions of L’Histoire that had been produced with puppets, but was unable to find any. “I work with Ali Garrigan and Tailspinners Children’s Theatre, and I thought puppets would be really cool, not only for the characters but also for the props. The fiddle, the book, and the rucksack all have a connection to the soldier in a way that I think is very important — they need to have a life of their own. When you see the piece staged, or danced, those things are just props.”

Although Lowry has never worked on a puppet/projection show, he said he is very taken with the notion of merging the older art form of puppetry — something that has been used for centuries to tell stories — with the very new art form of video projection. “I think the use of puppets and video is a great way to bring in a whole new audience. I’m telling everyone to bring the kids, bring the grandkids, and let them experience classical chamber music in a way that I think is very inviting.” 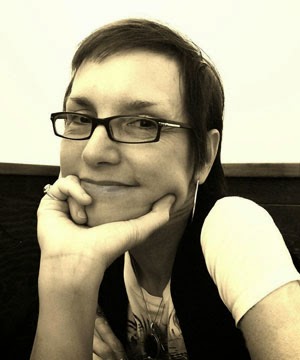 Alison Garrigan, Executive Artistic Director of Tailspinners Children’s Theatre, has worked in professional theatre locally, regionally, and nationally as an actress, director, designer, puppet-maker, and teacher. She has performed and produced shows at many venues, including Cleveland Public Theatre, Cleveland Institute of Music’s Opera Stage, Beck Center for the Arts, Dobama Theatre, and Great Lakes Theatre Festival. She is also an admirer of Franklin Cohen, ChamberFest, and T. Paul Lowry.

“When T. Paul approached me about the project, I was really thrilled because I think it’s a natural partnership,” Garrigan said enthusiastically over the phone. “I’m always excited to see other arts organizations reaching out to younger audiences, which is a huge passion of mine.”

Garrigan was equally excited to be involved in a project centered around L’Histoire, a work her composer grandfather introduced her to at a young age. “I’ve heard it done as a straight concert piece with only the music a couple of times. I’ve seen it danced and done with the narration.” 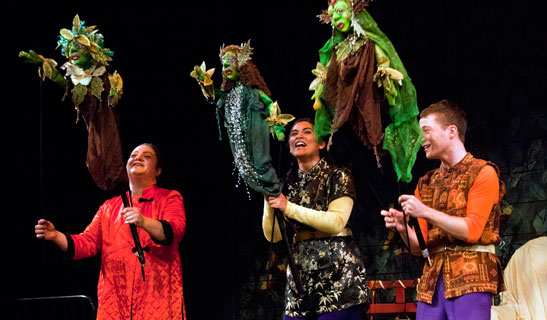 She described the puppets as larger than life. “They’re what we call rod and mask puppets, so you can see the body of the puppeteer, but the puppet itself is a giant mask on a pole. Each one has an arm and a hand that comes off so that it can be manipulated with the rods. I think they’re going to be a really nice link to the kids in the audience, something they can gravitate to that will add an element of excitement to the show.”

Garrigan noted that there were a few things she needed to keep in mind while creating the concept of the production. “When you’re developing the puppets you have to listen carefully to the needs of the musicians and the requirements of the story, and understand the parameters of the space. You could just say, ‘OK, I’m going to make these puppets that are going to take over the world,’ but then everything else would get left behind. But at the same time, the puppets are such high fantasy that you have to give them the ability to stand head-and-shoulders above it all.”

Did the opulence of the Maltz Performing Arts Center have an influence on her designs? “It did,” she quickly answered. “That’s one of the reasons the puppets are larger than life. The space is as well — and not just from a size standpoint. It’s just so beautiful that we needed the puppets to hold their own in the space, but not compete with it.”

Garrigan said that she views the story of the soldier who sells his soul to the devil as a bigger-than-life fantasy. “I think the puppets will give it a fairytale quality that will help kids — and adults — to better grasp its message. No matter how brilliant the narrator is, this piece involves a lot of talking. So it’s nice to have something else for the audience to gravitate to.”

Supported by engagingly, yet simple staging by Cara Consilvio, a well-prepared cast of singers told the archetypal story of Cinderella with charm and flair. Framing the production was  a sparse but colorful set and wonderful lighting by Dave Brooks. END_OF_DOCUMENT_TOKEN_TO_BE_REPLACED

END_OF_DOCUMENT_TOKEN_TO_BE_REPLACED

The music isn’t easy to play, either. Over the course of two hours, all of the musicians brought fantastic focus to the unrelenting tricky rhythms and countless layers of parts, all of which require a high level of individual responsibility. Even in the moments of calm, the accompaniment remains perpetually unsettled. Adams — who made a sprightly presence on the podium — combines minimalist, repeating motives in gradual layers, which eventually become so dense they overwhelm the senses. Lisa Wong deserves special mention for her thorough preparation of the Cleveland Orchestra Chorus, as does Jennifer Rozsa for the Children’s Chorus, which made a brief but memorable appearance in the last few minutes. END_OF_DOCUMENT_TOKEN_TO_BE_REPLACED