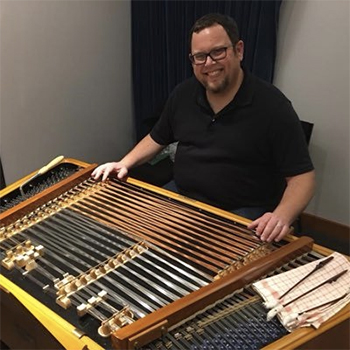 If you thought the cimbalom was only used in Eastern European folk music, think again. “I got my start on it with the LA Philharmonic,” percussionist Chester Englander said during a recent telephone call. “They hired me to play a piece by Frank Zappa called Yellow Shark and it uses the cimbalom in ‘The Girl in the Magnesium Dress.’” From then on Englander has been on a mission to expand the instrument’s repertoire.

On Friday, April 22 at 7:30 pm at Kent State’s Ludwig Recital Hall, Englander will join No Exit in a concert they’re calling “The Big Cimbalom Thing.” The program will feature music by Per Nørgård and world premieres of works by Douglas Knehans, Hong-Da Chin, and Edward Smaldone — and it will be repeated on April 28 at 8:00 pm at Cleveland State’s Drinko Hall, April 29 at 8:00 pm at SPACES, and April 30 at 7:00 pm at Heights Arts. All the concerts are free.

How does Englander describe the instrument to those who have no idea what it is? “Most people in America have heard of the hammered dulcimer, so I say that it’s in the dulcimer family. I also point out that there are many instruments around the world in that family that are cousins of each other. They are all very different from each other, but they are all members of the chordophone family” — instruments that produce sounds by vibrating strings.

Englander noted that the cimbalom tends to be used more often in chamber music rather than orchestral works. “A great thing about No Exit is that it’s a varied group, so the music doesn’t have to be written for the full ensemble,” he said. “Doug’s piece is for string quartet and Hong-Da Chin’s is for the full ensemble.”

This is not the first time that Englander and No Exit have worked together. In the fall of 2019, he and the ensemble’s cellist Nicholas Diodore performed Katie Agócs’ Saint Elizabeth Bells. “This is our first set of concerts of commissioned repertoire and there’s  more in the pipeline,” Englander said.

What do composers need to know in order to write idiomatically for the instrument? “In the past, starting with John Adams — the first person who wrote for me — I’ve made a full-size template of the instrument so that they could see the layout of the notes. I want them to know where the notes are, but once they see the template, it terrifies them too. And the fear of writing something that isn’t playable sometimes can get into their creative process.”

Englander pointed out that the instrument’s octaves are not orderly like the piano, where the spacing between the notes remains the same everywhere on the instrument. “With the cimbalom, especially in its higher register, the positioning of two A’s is very different from the positioning of two E-flats, for example. And chromatic octaves really get my blood pressure going.”

How did an accomplished percussionist find his way to the cimbalom? “Back to Yellow Shark,” he said. “The LA Phil said, ‘We want you to play, but you’ll have to learn to play cimbalom — we’ll get you an instrument.’ I looked at the music and thought, I want the money, so yes, I’ll do it.”

Soon after, Englander had a moment of clarity, he said, and decided to buy his own instrument. “I thought, so few people play it, and if I play it with the LA Phil, I’ll have credibility all over the country. That was the spark that lit the inferno. And that first concert was conducted by John Adams. We knew each other and he said, ‘I didn’t know you played cimbalom, do you want me to write a piece?’”

Englander noted that Adams has included the cimbalom in a few of his orchestral works. “The Gospel According to the Other Mary was the first, then came Scheherazade.2, and now I’m slated to premiere his new opera in San Francisco in the fall. It’s another huge part. I’ll start working on that as soon as the No Exit concerts are finished.”