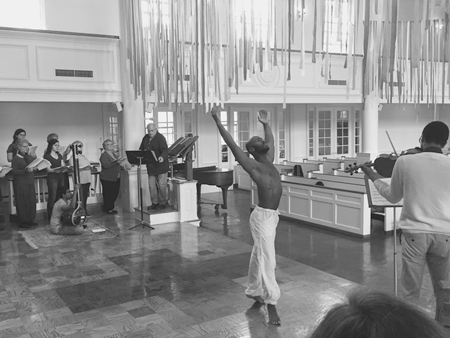 On Sunday evening, May 22, Choral Arts Cleveland presented its third and final concert of the season at Christ Episcopal Church in Shaker Heights. The program, titled “Chiaroscuro, Light and Shadow, Bodies in Motion,” included an interesting variety of styles and performance forces, including solo songs; a capella choruses; choruses accompanied by piano, organ, and additional instruments; and dancers from Verb Ballets. In the waning golden evening light, the sanctuary sparkled with atmosphere.

The concert’s highlight was the Cleveland premiere of British composer James Whitbourne’s Luminosity, part of Choral Arts’ ten-year exploration of the New English School of living composers. Luminosity is, in the words of music director Martin Kessler, “a multicultural, multimedia meditation on transcendent beauty and eternal love that weaves seven mystical texts into a fabric of ostinatos, chorales, sudden outbursts of blinding light, and movement.”

The chorus was divided into two parts, stage left (by the viola and tam-tam) and stage right (by the tanpura). The center of the Sanctuary became the stage for the dancers. While there didn’t seem to be any direct correspondence between the words and the choreography, the modern dance movements were graceful yet sparing, adding a wonderful richness to the musical flow.

In the first movement, “Lux in tenebris,” with text from the Gospel of John, the chorus repeats the word illuminare many times. It opens imaginatively with a viola solo accompanied by the tanpura drone and the chorus humming. The next three movements, “The Changing Scenes,” “Castle of Diamonds,” and “Silence” (with texts by the 19th-century Zen Buddhist nun Ryonen, 16th-century saint Theresa of Avila, and Isaac of Nineveh from the 7th century) were performed without pause, concluded by a fine organ solo.

“The Living Thing,” on a 14th-century text by Julian of Norwich, expresses the sentiment that “all things have their being through the love of God.” Melismas added charm.

In “Ask the Beauty,” on a 3rd-century text by Augustine of Hippo, the dancers, in costumes of many colors, added a stunning counterpoint of movement to the prayerful text.

“All Shall Be Well,” also on a text by Julian of Norwich, featured a lovely soprano solo by Laurie Aronoff. The final “Alleluia” shone with fine choral writing to close an engaging, 30-minute work that flowed beautifully.

Morten Lauridsen’s O Nata Lux was especially beautiful, its largely homophonic texture shimmering with lovely imitative passages. Keith Hampton’s True Light is an imaginative arrangement of the famous spiritual, This Little Light of Mine. The antiphonal exchanges in the chorus delighted the audience, as did Emily Cornell’s two beautiful solos.

Published on ClevelandClassical.com May 25, 2016.

END_OF_DOCUMENT_TOKEN_TO_BE_REPLACED

Rodgers & Hammerstein’s Cinderella was originally produced for television in 1957 — seven years after the animated Disney film was released — and starred Julie Andrews. According to the Rodgers & Hammerstein website, it was viewed by over 100 million people. END_OF_DOCUMENT_TOKEN_TO_BE_REPLACED

The story line has its origin in an 1855 play and an 1842 farce that Thornton Wilder mined for his 1938 play The Merchant of Yonkers. When that turned out to be a flop, in 1954 Wilder made the crucial decision to re-center the show around the character of the legendary marriage broker Dolly Gallagher Levi and renamed it The Matchmaker. END_OF_DOCUMENT_TOKEN_TO_BE_REPLACED

The Dodero Center for the Performing Arts at the Gilmore Academy in Gates Mills is one feature of an impressive campus. The auditorium is shallow, the stage is deep, and the ensemble played without a shell. Throughout the program, the sound, especially in instruments’ lower registers, tended to disappear. END_OF_DOCUMENT_TOKEN_TO_BE_REPLACED