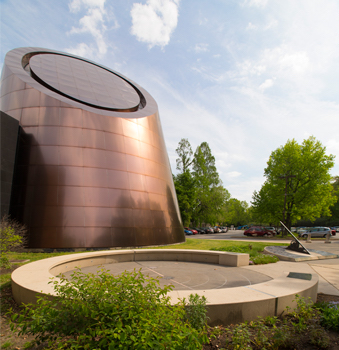 The subtitle is “Through the Ages.” Each of five films will focus on the themes of the Stone Age, Industrial Age, Space Age, Digital Age, or Into the Future — one composer and a group of two to four filmmakers per time period. “Within those very broad themes, tremendous liberty was given,” Steven Mark Kohn said in an interview. Kohn, who coached the composers in the project, directs the electronic music studio and serves as professor of composition at CIM.

Kohn’s electronic music course, which also touches on film scoring, is a prerequisite for composers to participate. What do they learn about scoring in the class? “We talk about establishing mood, adjusting to changes in the film, contrasts, hit points, and managing tempo to accommodate all those things,” Kohn said. “It’s not only an aesthetic approach to helping tell the story — that’s a big thing — but also about the mechanical details of managing the software and the musical material to fit the film.”

In a separate conversation, Keith Fitch, CIM chair of composition and the conservatory’s leader for this project, explained its function in the composition curriculum. “I require all the juniors to collaborate with an artist in a different discipline outside CIM,” he said. Possibilities include working with filmmakers, choreographers, theater directors, and video game designers. “Most of our students end up scoring these short films for the Planetarium Project.”

After the five time periods were assigned in September, everyone got to work. “The filmmakers began creating their story boards, layouts, and pieces — very slowly, it’s hard work,” Kohn said, “and the composers began sketching out their material.” That material can be a mesh of music and sound design. “The lines are blurred, and it’s really a creation of an entire sound world.”

In the business of film scoring, visuals are usually finished first, and the music is added afterwards. Kohn highlighted the simultaneity of the work in this project. “That created the opportunity for real collaboration,” he said. “They could show each other their work and discuss moods, desires, directions, and ideas.”

A curved dome is not a normal movie screen. I asked Kohn about the impact of that on the filmmakers, who have been led by CIA’s Anthony Scalmato and Hal Lewis, chair and assistant professor of animation. “Special video production software was used which represented a circular, 360-degree surface, with the edge of the circle being the perimeter of the Planetarium dome,” Kohn said. “It’s pretty unusual, and that required a learning curve for the artists, but the work I’ve seen so far is rich and looks very good.”

Does that also affect the composers? Kohn said they had to create an “immersive sonic environment” that can be mixed into 5.1 surround sound — “five speakers and a subwoofer,” he explained — so that the music also encircles the audience. Bruce Egre, CIM’s head of audio recording, will supervise the surround sound mixes in the conservatory’s audio production studio, while Planetarium Manager Jason Davis will incorporate the mixes into the films at the dome.

And for those who haven’t been in that space, what’s it like? “Very cool,” Keith Fitch said. “When you’re in there, it is completely pitch black. So when you see the films and you hear the music, it can be an otherworldly experience.”