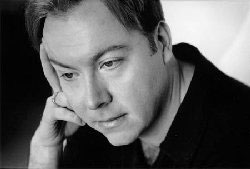 In a recent concert by the Cleveland Institute of Music’s New Music Ensemble, Keith Fitch — CIM’s composition department chair, and the ensemble’s director — demonstrated his penchant for effective curation. His own new composition, The Range of Light, illuminated the work and words of John Muir, a visionary in American history, and cast the other pieces on the program into sharp relief.

From the first minutes of the concert on February 7 in CIM’s Mixon Hall, the Ensemble’s student performers pulled no punches. Joseph Teeter laid into his cello part with fierce energy in the opening movement of Elliott Carter’s 1952 Sonata for Flute, Oboe, Cello, and Harpsichord. Oboist Devin Hinzo and flutist Alexandria Hoffman threaded velvety, restless counterpoints around the agitated harpsichord statements of Taylor Flowers in the second movement. When a brief, rosy chord blossomed early on, the players savored its sound. Like many of Carter’s works of the 1950s, the Sonata now registers as an early attempt at a characteristic style that only later would become compelling. Still, it afforded these players opportunities to shine.

For sheer sensuous beauty, no piece on the program rivalled Tōru Takemitsu’s Rain Spell (1982). Taylor Newman, a sensitive and precise percussionist, channeled the rippling sound of the vibraphone into delicate ensemble textures, while Hoffman brought warmth and vitality to the sound of her alto flute. In Zachary West’s hands, the high register of the clarinet was as clear and bright as a cloudless afternoon. Harpist Natalie Man tackled a tricky series of string harmonics with effortless consistency, and Su Han Ho pulled splashes and sheets of resonance from the hall’s grand piano.

Tensions between unity and divergence animated a performance of Frederick Fox’s Upon the Reedy Stream (1987), a collaboration between Hinzo and the Vltava Quartet. On one hand, the bubbling oboe lines that run horizontally across the piece stand in opposition to the frantic episodes assigned to the strings. On the other, divisions rend the quartet itself, with Fox often initiating a unified gesture, then forcing the players to peel away from one another. Violinists Julian Maddox and Zichuan Kevin Wang, violist John-Paul Shoemaker, and Teeter brought such ferocity to these moments that Hinzo, piping away at quick runs and sterling high notes, seemed to be calling out from another planet.

Fitch’s The Range of Light, premiered incomplete in 2017 and given its first full performance on Wednesday night, sets texts by environmental pioneer John Muir. An early advocate of the U.S. National Park Service, Muir often wrote of mountains, streams, and forests in tones of spiritual ecstasy. Baritone Matthew Brennan proved a strong soloist in place of the ailing CIM professor Dean Southern, delivering both spoken and sung texts with authority. Fitch’s piece unfolds in a rough arc, beginning and ending with spoken lines and a horn solo delivered from offstage by Connor Monday. The solo lines of Moises Lopez Ruiz’s bass flute proved a persuasive answer to Brennan’s voice in the central pair of movements, and violinist James Thompson, cellist Daniel Blumhard, and pianist Taylor Flowers furnished sparkling lines and textures, as brilliant as the stars in a remote night sky.

Here’s hoping that Fitch’s evocative piece travels far and wide. For all the 19th-century Romantic spirit carried by its text, it nonetheless carries a timely message. “Divine, enduring, unwastable wealth,” the soloist intones in conclusion, referring to the mighty yet imperiled ecosystem that Muir fought to preserve. May we all heed those words.