The character list begins with a mischievous child and his mom, but soon branches out to include armchairs, a bench, a couch, a stool, a wicker chair, and a grandfather clock. Then the kitchenware, plants, and animals enter the fray.

But are singers okay with being cast as armchairs? That’s one of many questions I recently got to ask Dean Southern, head of the voice and opera division at the Cleveland Institute of Music. We spoke by phone about CIM Opera Theater’s upcoming double-bill, L’Enfant and Stravinsky’s Le Rossignol — a fascinating work in its own right, and more rarely heard than the already uncommon Ravel.

Performances will take place in CIM’s Kulas Hall from Wednesday through Friday, November 7-9 at 7:30 pm, and on Saturday, November 10 at 3:00 pm. Harry Davidson will lead the CIM Orchestra, which will appear in size XL, thanks to the extensive instrumental colors called for by Ravel and Stravinsky.

A couple of notes before we dive in with Dean Southern: the productions include projections of English text. Tickets are required. And the performances will be live streamed (choose a date on CIM’s events calendar to get the appropriate link).

Southern and I began by discussing the many common threads between the two operas, including their sense of the fantastical. Le Rossignol (“The Nightingale”) is based on a Hans Christian Andersen fairy tale — it tells the story of an emperor who is enchanted by the singing of a nightingale, but takes it for granted when he’s offered a mechanical version of the bird. In the end, the real bird saves him from death with its beautiful sound.

While not a fairy tale, L’Enfant et les Sortilèges (“The Child and the Spells”) sounds like something from deep down the rabbit hole. “All of these non-human things — furniture, wallpaper, a squirrel, a frog, a fire, a princess torn out of a storybook — come to life to talk to the child about how he has misbehaved,” Southern said.

Next we moved onto some musical similarities. “They begin almost exactly the same way, with very sparse writing and a stream of steady eighth notes. It’s sonically striking to hear them together. They also both require a gigantic orchestra with very difficult parts. But one of the great advantages we have at CIM is that we can do things that require quite fiendish orchestral writing with our wonderful student orchestra. We’re very fortunate.” 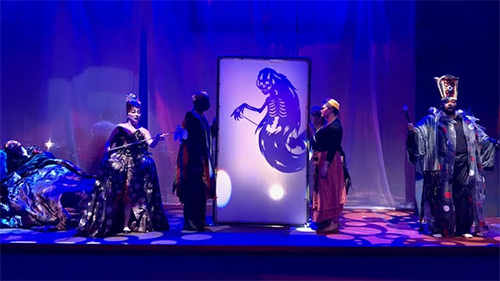 Another commonality: the influence of exoticism. “That was so big in the early 20th century — there are lots of parallel fourths in both,” Southern said. “The Nightingale actually takes place in ancient China, though there’s almost nothing authentically Chinese about it. Hans Christian Andersen had never been to China — it was something far away and exotic to him. And even though Russia and China border each other, I don’t think Stravinsky was ever in China either. He had a term for this highly stylized world that was created in Hans Christian Andersen but also in his own music: fausse chinoiserie.”

In an effort to bring more cultural authenticity to Le Rossignol, Southern has been drawing on what he learned in several trips to China in recent years, and on the experiences of his Chinese vocal students. “We’ve been studying the kinds of movements that are traditional in Peking Opera, and that’s been the basis of a lot of the staging,” he said. “We’re also using some Chinese shadow puppetry. We want to pay tribute to and honor the culture of our students.”

Redemption is also key to both operas. In Le Rossignol, the nightingale flies away upon seeing the mechanical version of itself, and the emperor angrily banishes the bird. He’s humbled when it returns of its own accord to sing to him and save him. In L’Enfant, the child mistreats everyone and everything around him, but in the end tends to the injured squirrel and is reunited with his own mother. “It’s nature that brings both of them back,” Southern pointed out.

One final tie to mention: L’Enfant includes its own nightingale character, which will be played by the same vocalist as the bird in Le Rossignol. “Things like that are really fun to connect,” Southern said.

For the rest of our time, I picked Southern’s brain about the Ravel. Not only are the characters unorthodox, but some of the vocal parts are too. The clock takes the spotlight in a number titled, “Ding, ding, ding, ding” — guess how that one goes — and the cats are featured in some memorable meows. What’s it all like from a performer’s point of view?

“It’s an amazing piece, but it’s also wonderfully strange and requires much imagination on the part of the audience,” Southern said. “And for all of us — director, singers, audience members — you have to sort of let go of typical opera. Some things are very operatic, like the fire aria, which is quintessential Italianate, virtuosic singing. But then we have the clock, the cats, and the China cup, whose music almost sounds like 20th-century vaudevillian songs.” Southern noted that China has its own vaudeville tradition — another way he’s highlighting cultural authenticity.

But it’s one thing to let go of typical opera, and another to see your name under the role of armchair. How have the singers responded to the challenge of their surprising assignments? “They’re embracing it,” Southern said. “I think one of the great things about being young is being flexible. They’re just diving in.”

Jackson began the program with a recitation of Langston Hughes’ poem “Helen Keller” — the first of five poems by Hughes that served as interludes between each piece on the first half. END_OF_DOCUMENT_TOKEN_TO_BE_REPLACED

Pianos with pins and tape on strings, a bass drum and tam tam, crotales, Almglocken, and vibes. Microphones were hooked up all around the instruments. The feed was sent to speakers around the room. Lighting designer Nicholas Houfek hung incandescent globes over the arrangement of instruments from thin black wires stretching across the beams. END_OF_DOCUMENT_TOKEN_TO_BE_REPLACED

From the podium, Elim Chan set an ambitious tone for the evening. The rising star conductor, here in her Cleveland Orchestra debut, has a commanding style, and every twist and turn in Saturday’s performance tracked closely with her baton. END_OF_DOCUMENT_TOKEN_TO_BE_REPLACED