There was so much to like about the Cleveland Institute of Music Opera Theater’s new production of The Magic Flute, directed by Dean Southern, that it’s difficult to know where to begin with the accolades. The opera was presented on February 26 and 28 and March 1 in CIM’s Kulas Hall. (I attended the final performance.)

The production, sung in German with German spoken dialogue and English supertitles, succeeded in no small part due to the vocal prowess and theatrical abilities of the young cast. Tenor Giwooung Kim embodied the handsome though sometimes daft prince Tamino. His delivery of “Wie stark ist nicht dein Zauberton” (“How strong is thy magic tone”) during the finale of Act One was splendid.

Baritone Dylan Glenn, as Tamino’s sidekick Papageno, brought an abundance of character to the role of the foolish bird catcher in search of a wife. Soprano Siyeon Kim, singing with clear diction and vocal flexibility, made for an innocent and appropriately confused Pamina. (When would she get to meet Tamino?) And singing with a rich, resonant tone, bass Daniel Fridley personified the enlightened Sarastro, whose actions are guided by principle and reason.

Other excellent performances included Brianna Nemback, Elise Pates, and Emma Nossem as the Three Ladies, attendants of the Queen of the Night, who were vocally splendid as well as comical in the opera’s opening scene as they contemplated whether or not to abandon the unconscious Tamino. 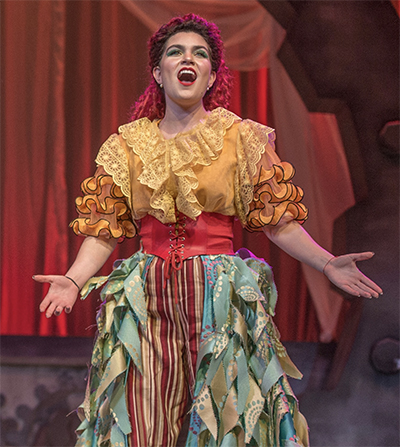 Baritone Xiaoyang Zhang made the most of his role as the Speaker of the Temple, and soprano Jean Furman (above) was simply delightful in the role of Papagena, the would-be wife of the birdcatcher. Furman and Glenn outdid themselves during the famous “Pa–, pa–, pa–” aria.

Rounding out the supporting roles were Tyler Evatt-Young as Monostatos; Xiaoge Zhang, Jacqueline Schimpf, and Yuzhebn Jin as the Three Spirits; Borui Xiang and Jiayin Shi as the Priests; Daveon Bolden and Matt Mueller as the Armored Men; and Francesco Bochicchio, Jose Hernandez, and Cameron Liflander as the Slaves.

Soprano Mengqi Gao was superb as the obscurantist Queen of the Night. Her powerful, focused tone projected well in her lower register, and her high notes during “Der Hölle Rache kocht in meinem Herzen” were stunning.

Southern’s staging allowed the characters to engage in natural conversation with one another while always letting the cast’s comedic abilities shine. However, Dylan Glenn’s hysterical delivery during Papageno’s suicide scene stole the show. Dave Brooks’ sets and lighting and Inda Blatch Geib’s costumes created the magical world the opera requires.

Conductor Harry Davidson did an excellent job of keeping everything moving. The CIM Orchestra sounded secure and featured many wonderful wind solos. The chorus, prepared by John Simmons, and cast were stentorian in the opera’s concluding scene.

END_OF_DOCUMENT_TOKEN_TO_BE_REPLACED

Rodgers & Hammerstein’s Cinderella was originally produced for television in 1957 — seven years after the animated Disney film was released — and starred Julie Andrews. According to the Rodgers & Hammerstein website, it was viewed by over 100 million people. END_OF_DOCUMENT_TOKEN_TO_BE_REPLACED

The story line has its origin in an 1855 play and an 1842 farce that Thornton Wilder mined for his 1938 play The Merchant of Yonkers. When that turned out to be a flop, in 1954 Wilder made the crucial decision to re-center the show around the character of the legendary marriage broker Dolly Gallagher Levi and renamed it The Matchmaker. END_OF_DOCUMENT_TOKEN_TO_BE_REPLACED

The Dodero Center for the Performing Arts at the Gilmore Academy in Gates Mills is one feature of an impressive campus. The auditorium is shallow, the stage is deep, and the ensemble played without a shell. Throughout the program, the sound, especially in instruments’ lower registers, tended to disappear. END_OF_DOCUMENT_TOKEN_TO_BE_REPLACED