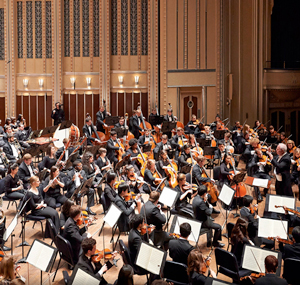 The Cleveland Institute of Music Orchestra opened its CIM @ Severance series on Wednesday evening, October 1, with a single work on the program: Gustav Mahler’s Symphony No. 5 in C-sharp minor, conducted by CIM president Joel Smirnoff. The performance was highly competent. I often had to remind myself that this was a conservatory orchestra, and there was a high probability that this was the first time that many of the students had performed this monster work.

It is also likely that it was prepared in a rehearsal period of four or five weeks, since the fall semester began in late August.

The beginnings of Mahler’s fifth symphony date from 1902, in the first blush of the composer’s courtship and marriage to the glamorous and influential Alma Schindler, who was well-connected to Vienna’s artistic and intellectual elite. The work is a radical departure from Mahler’s previous four symphonies, eliminating folksong, programmatic, and vocal elements. The work is in three large parts, comprising five movements. The music is abstract, and the structures are complex —characteristics which would become even more intense in the sixth and seventh symphonies. Mahler continued to tinker with the score, especially its orchestration, until it reached its final form in 1911.

There are performing pitfalls galore in this symphony, beginning with the opening trumpet fanfare. CIM principal trumpet Hayato Tanaka nailed it, as he did with the extensive solos later in the symphony. Smirnoff chose moderate and sensible tempos. The first movement funeral march was dominated by the brass, who sometimes obliterated the rest of the orchestra. Indeed, there was a certain amount of “overplaying” throughout the performance. With the subtlety of Severance Hall’s acoustics, it is not necessary to play at full throttle except at the most climactic moments. (This was brought home to me before the concert began: a single member of the first violin section was rehearsing alone on stage. Her sound was so clear, it was as if I was sitting beside her.)

The second movement (Sturmisch bewegt) featured many subtle details, among them a beautiful English horn solo.  One of the movement’s challenges is differentiating what is thematically significant from what is “background.” In general, the performers managed to keep the polyphonic complexity sorted out.

The huge scherzo that forms the second part of the symphony opens with a fanfare for the horn section, another landmine in this symphony. Alas, the CIM players did not achieve unanimity of intonation and ensemble, although all was well when the theme returned later in the movement. The significant horn solo in the movement was expertly played by Connor Monday, who deserved the whistles and whoops he received at the final bows. Many other incidental solos were skillfully handled by the prinicipal winds.

The third part of the symphony begins with the famous Adagietto, poignantly linked with the dying Gustav von Aschenbach in the soundtrack to Visconti’s 1971 film, Death in Venice. The nostalgic and serene movement, scored for strings and harp, should achieve a sense of suspension of time in order to contrast with the other movements. The CIM orchestra did not fully realize that goal. The music was never still enough.

Smirnoff launched immediately from the last chord of the Adagietto into the solo horn note that opens the final movement, Rondo-Finale. The movement, including the complicated, jolly fugue midway through, brought out the orchestra’s best playing. The finale was ablaze with symphonic glory.

This was a commendable performance of Mahler’s fifth symphony. In another world, not encumbered by the necessity of other performances and curricular needs, it would be great to hear the CIM Orchestra and Joel Smirnoff perform the symphony again after living with it for, say, another eight months. There was so much here that was “this close,” so many details that could have been resolved by more experience and another try. Nonetheless, these young performers deserved the ovation that they received from the near-capacity Severance Hall audience.

END_OF_DOCUMENT_TOKEN_TO_BE_REPLACED

A new CD by Christa Rakich, who is currently Visiting Professor of Organ at the Oberlin Conservatory, gives a nod in two directions. As its title announces, it’s an homage to her former teacher and colleague, the late Yuko Hayashi, longtime professor at the New England Conservatory and curator of Boston’s Old West Church Organ Series. It’s also the first recording to be made of Richards, Fowkes & Co.’s Opus 16 instrument, built in 2008 for Goodson Chapel of the Duke Divinity School in Durham, North Carolina. END_OF_DOCUMENT_TOKEN_TO_BE_REPLACED

END_OF_DOCUMENT_TOKEN_TO_BE_REPLACED

Hailed by the New York Times as “The Best Classical Music Ensemble of 2018,” Wet Ink Ensemble has lived up to this acclaim once again with their recent release Glossolalia/Lines on Black. The album takes its name from the two extended works by Wet Ink members Alex Mincek (saxophone) and Sam Pluta (electronics). The remainder of the septet includes Eric Wubbels (piano), Erin Lesser (flutes), Ian Antonio (percussion), Josh Modney (violin), and Kate Soper (voice). END_OF_DOCUMENT_TOKEN_TO_BE_REPLACED

Croatian-born pianist Martina Filjak, now living in Berlin, has released her latest album, Light and Darkness, featuring music by Franz Liszt — plus an epilogue by Arvo Pärt. The disc confirms once again all the special technical and interpretive qualities that won her the gold medal at the Cleveland International Piano Competition in 2009. END_OF_DOCUMENT_TOKEN_TO_BE_REPLACED