While his right hand signaled entrances and attacks, his left independently shaped phrases and musical arcs. Working together, the two drew clean but rich textures from the Orchestra, who were attentive to every subtlety in Kalmar’s interpretations.

Lithuanian composer Raminta Šerkšnytė’s Fire was written to lead directly into Beethoven’s Fifth Symphony — it ends with that work’s portentous opening notes — but on this occasion was followed by Beethoven 4. Overlooking that final disjunction, her work is an eloquent exploration of the various characters represented in that primal element. Šerkšnytė writes energetically with a keen ear for orchestral textures and color, and Kalmar and the Orchestra gave Fire a brilliant reading.

Beethoven’s Fourth Symphony is one of the less-often played of the Nine, but its charms and humor came across handsomely in CIM’s performance on Sunday. Kalmar led a thoroughly professional performance replete with fine playing from ensemble and soloists alike. Samuel Watson flawlessly dispatched the frightening bassoon solo in the finale twice, seemingly without breaking a sweat. 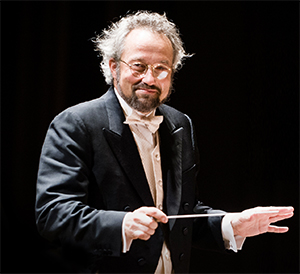 Thanks to George Szell, Dvořák’s Slavonic Dances are well-known to Severance audiences. Kalmar programmed all eight of the Opus 46 set on Sunday, which was probably not what the composer had in mind, but it allowed more students to join in the fun. The performances were alternately stirring and soulful, and the many tempo changes came off without a hitch. Kalmar brought out the broad counter melodies that are one of Dvořák’s little compositional secrets, and allowed the bass drum and cymbals — constantly busy during this part of the program — to top off the exuberance of these Bohemian treasures.

END_OF_DOCUMENT_TOKEN_TO_BE_REPLACED

Supported by engagingly, yet simple staging by Cara Consilvio, a well-prepared cast of singers told the archetypal story of Cinderella with charm and flair. Framing the production was  a sparse but colorful set and wonderful lighting by Dave Brooks. END_OF_DOCUMENT_TOKEN_TO_BE_REPLACED