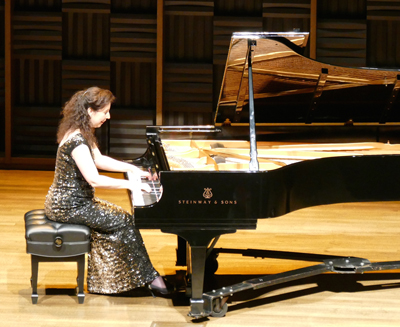 As much fun as it is to listen to the parade of pianists who show off their prowess during the grueling rounds of the Cleveland International Piano Competition, what’s truly rewarding is to hear performances by former laureates who have followed up on their early promise by building impressive international careers. Angela Hewitt, who took third place in the 1979 contest (then the Casadesus Competition) returned to Cleveland on Saturday evening to play on CIPC’s excellent concert series in Gartner Auditorium at the Cleveland Museum of Art.

The nearly full house was a testament to Hewitt’s reputation. Her recital of music by J.S. Bach, Beethoven, Domenico Scarlatti, Albéniz and Liszt affirmed her status as a thrilling, clear-headed artist whose playing is so healthy and natural that it should be labeled “100% organic.”

The music of Johann Sebastian Bach is a Hewitt specialty, and her strong, insightful playing of the G-major Partita got the program off to a fine start. She made a brilliant toccata out of the “Praeambulum,” and her “Allemande” ambled along as playfully as the following “Courante” dashed to the finish line. She infused the “Sarabande” with a delightful French languor, and tossed the “Minuetto” and “Passepied” off with spirit. The “Gigue,” festive but neatly controlled, ended the partita stylishly.

Beethoven’s next-to-last sonata, No. 31 in A-flat, sounded fresh and improvisatory in Hewitt’s hands — she acted as though she might be experiencing some of the composer’s quirky changes of direction for the first time. Following the petulant “Scherzo” with a muted, measured “Adagio,” Hewitt let the fugue take her away down curious avenues where Beethoven interrupted the counterpoint with an aria, then with a wall of successively louder repeated chords that led to a resumption of counterpoint, and eventually to an exultant, almost steely ending.

Many pianists use Domenico Scarlatti’s sonatas as warm-ups at the beginning of recitals, but Hewitt chose four of them to change things up after intermission. That proved to be an interesting and effective position for these continuously inventive pieces (there are 555 of them). A two-part invention, fanfares, and a legato arioso preceded No. 29, a flashy perpetual motion exercise that called for some daring cross-hand work, first with single notes, then with triads. Through all those complicated passages, Hewitt didn’t nick a key. 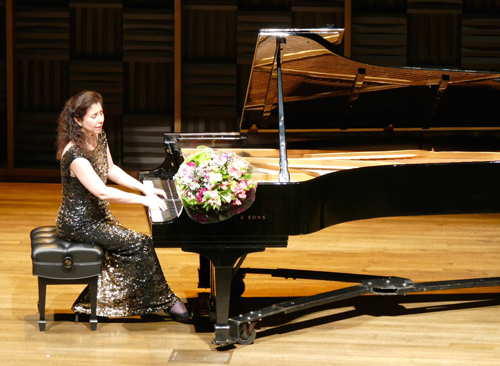 Three evocative cityscapes from Isaac Albéniz’s Suite Española followed and extended the Spanish theme (Scarlatti was Italian, but spent most of his career in Spain). “Sevilla” featured elegant octaves, “Asturias” strumming guitars. “Castilia” brought the mini-suite to a colorful conclusion with a thrilling Iberian toccata (amid some dramatic arm choreography from Hewitt).

The recital might happily have ended with that sunny music, but Angela Hewitt opted for dark drama, taking us on a descent into the Inferno with Liszt’s Aprés une Lecture du Dante: Fantasia quasi Sonata. Though Liszt, as a minor cleric, had some stock in making sure that redemption was part of the narrative of this piece, it becomes more exciting when the powers of hell get the upper hand. Hewitt conjured up a controlled but tumultuous scene that showed she still had formidable reserves of energy and virtuosity left at the end of a long program.

After CIPC’s Pierre van der Westhuizen pressed a huge bouquet into her hands, Angela Hewitt sent a delighted audience home with a gentle encore, “her favorite” Scarlatti sonata, the one in E-Major.

Music director and conductor Daniel Meyer built his playlist around Cleveland themes and scenes. “Exploration CLE” made use of engaging selections from the classical canon and beyond that celebrated “what makes Cleveland so special.” Happily, he and his musicians avoided constructing a visual slide show, choosing to let the music speak for itself. END_OF_DOCUMENT_TOKEN_TO_BE_REPLACED

You could see the relationship at work on a practical level. Repertoire for two players at the same piano requires a certain choreography. There’s just one of each pedal to share, and the hand crossings left and right — which can be so fun to watch a soloist pull off — get more complicated when another person’s involved. At times, Pompa-Baldi drew a hand away from the keyboard and into his body, making room for Friscioni, and at the close of a few delicate phrases, the two were crouched together over the same final notes at one end of the instrument. END_OF_DOCUMENT_TOKEN_TO_BE_REPLACED

The signature sounds of these famous film scores are not so much John Williams’ invention as allusions to other classical pieces. The foreboding half-step from Jaws, growing more and more furious in the cellos and basses, shares something with Dvořák’s “New World” Symphony and Bartok’s Miraculous Mandarin. END_OF_DOCUMENT_TOKEN_TO_BE_REPLACED