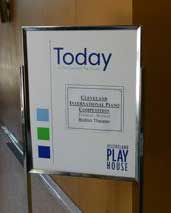 As they did on Wednesday afternoon, the performers in group number 3 treated us to a special afternoon of music making.

Esther Park (USA) opened the session with a lovely set of Scarlatti sonatas K 531, K 322, and K 203, performing all three with grace, and poise. It was too bad that her performances of the Chopin Etude in C Op. 10 #3 and the Brahms Variations on a Theme of Paganini did not fare nearly as well. Ms. Parks possesses outstanding technique, however too many missed notes crept into the Chopin, and while the Brahms had many lovely moments, during some of the louder, faster variations she had a tendency to apply too much pedal, causing a blurring of the sound.

As in round one, Evgeny Brakhman (Russia) sounded and looked as though he wanted to do nothing more than play the piano. He was in total control in the Brahms Seven Fantasies Op 116, often building phrases over long periods, as well as bringing a full color palette to the performance. In Kopelmann’s  ‘Everything is foreseen and free will is given’ we saw another side of him as a performer. During the first round, Mr. Brakhmann enthralled us with his magical playing of a Mozart sonata, but he is equally at home performing a
piece that emphasizes the percussive qualities of the piano.

Pallavi Mahidhara (USA), again used her unique sense of musical charm to deliver a beautiful performance of the Beethoven Sonata in C, Op 53 (Waldstein). She truly is an elegant performer who never seems to be concerned that things are not going to be perfect. George Walker’s Sonata #2 (it was really great to hear his music) was performed with a beautiful sound and lyrical thoughtfulness.

Zhang Zuo (China) began her program with Bach’s Partita No. 1 in B flat BWV 825, performing with clarity and an even sound. Schumann’s Symphonic Etudes Op. 13 was voiced and paced beautifully, although too many times the loud sections became muddy.  Ms. Zou is a fun performer with a hint of feistiness that works to her advantage.

Martina Filjak (Croatia), as on Tuesday, brought her full physical and pianistic athleticism to the stage. The highlight of her set was Bartok’s ‘Out of Doors’, where, as in her previous performance of the Berio, she showed a real sense for 20th century music. Her dramatic reading of this piece not only included total command over rhythmic complexities, but included some hauntingly beautiful unisons in the slow section. This was a an amazing performance, and Ms. Filjak was in total command of the piece. She began with a nice but pianistic version of Bach’s Prelude & Fugue in C# (WTC II), and followed it with the second performance today of the Brahms Paganini Variations. Her performance was well paced, well thought out and the theme remained prominent in all the variations. She is a performer who is comfortable in all genres, although her true artistic talent comes through in modern works.

Ending the afternoon, Yunquing Zhou (China) once again invited us to be part of his world through an absolutely beautiful performance of Beethoven’s Sonata op. 110. His sound remained full and healthy throughout. His final piece was Kapustin’s Eight Concert Etudes. This jazzy, spirited piece began with some wonderful melodic sections a la Marilyn McPartland that explored many styles of jazz from straight ahead to stride. It was the perfect ending to the afternoon.