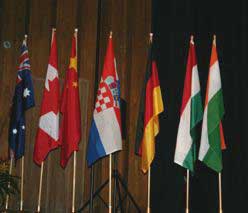 Our second date with Saturday evening’s quintet of pianists revealed some shortcomings we hadn’t noticed before, and one pianist quite happily presented a completely different personality from our first encounter on Wednesday evening.

Kwan Yi (USA) was all robotic energy three nights ago, plowing breathlessly through Beethoven and Chopin with admirable technique but not pausing to enjoy the sights along his musical journey. On Saturday, he revealed his gentler, more expressive side with a ruminative performance of Bach’s g minor Prelude and Fugue (WTC I) and a fine trek through Dutilleux’s ‘Le jeu des contraires’ in which he demonstrated varieties of touch and an ability to draw a big sound out of the Hamburg Steinway without succumbing to harshness. An impressively clear performance of Chopin (Ballade No. 3 in A-flat and Scherzo No. 3 in c-sharp) also showed that he’s able to be simultaneously dramatic and sensitive. Some of the quirky body language remains, but there was less of it (the Dutilleux ended with Yi frozen in a long pose facing the audience).

We called China’s Kuok-Wai Lio ‘the picture of poetic elegance’ on Wednesday. On Saturday we realized that we had been influenced more by his choreography than his music making. He sits far back from the keyboard and while this allows him to make expressive motions with his arms, everything in his playing also comes from the arm — and subtlety of touch and coloration suffer. He began with two slight but amusing movements of Nan’s ‘Chopin and the Cat’ then plunged without pause into Schumann’s ‘Davidsbündlertanz’. He got nearly all the notes, and nothing was really strange about the performance, but everything was also monochromatic, including his continuously pained facial expression.

Given a long Schumann work, and there are several on the menu in this competition, one wonders if it’s more wrong-headed to take Lio’s approach or that of Michael Brown (USA), who lavished attention on every note in his account of ‘Davidsbündlertanze’ on Saturday, producing a performance so full of color and nuance that it wearied the ear in a completely different way. On Wednesday, Brown had played an impressive mini-recital of Bach, Beethoven, Perle and Chopin. He wowed us on that occasion, but his choice of repertory on Saturday and his hyper detail-oriented performance of it gave us some second thoughts.

Anzhelika Fuks (Ukraine) seemed to be having an off night on Wednesday with subdued playing and a memory slip. Her session-opening program on Saturday (all-Chopin, with two Etudes, Liszt’s arrangement of ”Six chants polonaise’, a Nocturne and a Ballade) looked inviting and had some lovely moments with especially nice transitions between sections of pieces, but her memory again failed her at several points and brought some blurriness and confusion to her playing.

Gerhard Vielhaber (Germany) presented himself in Beethoven and Chopin on Wednesday to good effect. His choice of repertory and its execution on Saturday produced some doubts in our ears. Vielhaber began with an ill-conceived reading of Bach’s Partita No. 1 in B-flat inconsistent in its respect for formal balance (he took some repeats but omitted others and nixed the return of the menuet after the trio), devoid of articulation (playing whole movements staccato is an artistic cop-out) and inaccurate (the Gigue was simply a mess, with a big train wreck at the end of the first strain). He went on to extract four movements from Schumann’s Fantasiestücke and two from Kalabis ‘Akzente’ which partially redeemed his performance on Saturday, but on the whole, this was not a well-thought out session at the keyboard.

Northeast Ohio’s Les Délices has long been that rarest of beasts: a world-class organization so proud of its region (ours) and repertoire (distinct niches in pre-1800 music) that it never tries to be everything to everyone, paradoxically making a strong case for a broad, curious international following. In the December episode of its SalonEra series, the ensemble embraces its strengths and community to marvelous effect. END_OF_DOCUMENT_TOKEN_TO_BE_REPLACED

END_OF_DOCUMENT_TOKEN_TO_BE_REPLACED

Another I remember fondly is Gian Carlo Menotti’s Amahl and the Night Visitors.  Commissioned by NBC, the one act, made-for-television opera, premiered on December 24, 1951, at the network’s studios in New York’s Rockefeller Center. And now, through the wonders of technology, Cleveland Opera Theater has created a magical new production of the work which is available on demand through January 6, 2021 (Three Kings Day). END_OF_DOCUMENT_TOKEN_TO_BE_REPLACED

Jessen has now followed up with her second solo CD, Winter Chapel. Recorded on January 17, 2020 in Oberlin College’s Fairchild Chapel and available on Carrier Records, the album is a continuum in Jessen’s journey to push the musical boundaries of her instrument and herself as an improviser. END_OF_DOCUMENT_TOKEN_TO_BE_REPLACED