In this leg of the competition, the requirements become simpler, with only two imperatives. Competitors must include a work or group of works by a French impressionist composer and a Romantic composer, then they can choose to play any other work of their choice. The French requirement is a vestige of CIPC’s ancestor, the Casadesus Competition, and it brings an entirely new challenge into play.

As the original order of the draw is being preserved in the Semi-finals, Dmitri Levkovich of Canada and Evgeny Brakhman of Russia were the featured acts on Tuesday afternoon. Each player crammed as much music as possible into his 55-60 minute allotment. 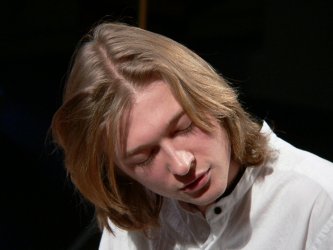 Levkovich began his program with Haydn’s Sonata in C, Hob. XVI:48 (for any of you who may have been wondering, “Hob.” stands for Anthony van Hoboken, the Dutch scholar who catalogued all of Haydn’s works like Köchel did for Mozart). This important sounding, two movement work inspired Levkovitch to deliver a performance full of pathos, flawlessly voiced runs and gentle lingerings on expressive notes.

His French work was Debussy’s suite ‘Pour le Piano’, a delightful three-movement piece which packs a lot of Debussy into a short period of time. Here, Levkovitch seemed to be hurried, pressing the tempo in the opening ‘Vif’ to the point where spaciousness suffered and repeated chords scarcely had time to sound. The final chords were tossed off with dismissive élan. The Sarabande was appropriately stately and the non-stop Toccata thrilling.

Levkovich then turned to three Rachmaninoff Preludes from Opus 32 (4, 13 and 5 in that order). He romped through no. 4, attentive both to moods and transitions. No. 13 began with a lovely cantabile, moving through a murky middle section then on to a triumphant ending with huge and impressive arpeggios at the conclusion. No. 5, featuring a lyrical melody over a left hand ostinato, was just beautifully played.

After returning to the stage, Levkovitch turned to a work we would hear twice this afternoon: Rachmaninoff’s Sonata No. 2 in b-flat minor. Levkovitch included elements of both the original (1913) and revised (1931) versions in a stormy and revelatory performance which delivered a huge range of emotion. The first movement was brooding and unsettled. The slow movement began with a simple little melody adorned with charming accompanimental filigrees that grew into something large very quickly. The last movement was simply ebullient, ending with a prodigious feat of pianism that earned Levkovich a mini-standing ovation. 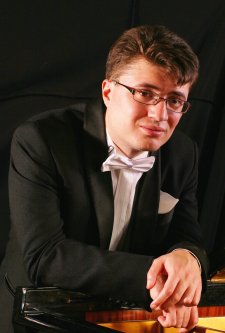 Evgeny Brakhman played the later, 1931 version of the Rachmaninoff to end his set, immersing himself into the work as though he were actually improvising the material as he went along. Compelling and highly dramatic, his hefty and emotionally charged performance may not have given the work quite the profile and clarity of structure of the performance that had preceded, but it was enitrely admirable in different ways.

Brakhman began with a Messiaen set: the strikingly titled ‘Cloches d’angoisse et larmes d’adieu’ (‘Bells of anguish and tears of farewell) and the ‘Ile de feu I’ from the Four Etudes in Rhythm. This was a striking way to begin. He pulled the quasi-Romantic ‘Cloches’ off with aplomb, beautifully contrasting dark chords in the lower register with tinkling tears in the treble and producing big, rich textures in the middle. The ‘Island of Fire’ was a tiny burst of fierce energy. Brakhman has the habit of winding up for descents on the keyboard like John McEnroe coiling for a serve, and his mid-air attacks are dramatic, to say the least.

Staying in France, Brakhman turned to two Debussy works, ‘Pour les arpèges composés’ from the 12 Etudes, and L’Isle joyeuse. The arpeggios were firm, colorful and beautifully voiced. At one point, Brakhman seemed to glance winkingly at the audience as though amused by what he was playing. ‘Isle’ sounded episodic and perhaps even a bit heavy handed. But Brakhman is a very physical player who puts a lot of kinetic energy into the keys.

Before the Rachmaninoff Sonata, Brakhman played six of Rachmaninoff’s Études-tableaux (nos. 8, 2 & 3 from op. 33, and 1, 2 & 9 from op. 39) — a lot of Rachmaninoff at one sitting. But he commanded the music masterfully, taking us on a thrilling sonic tour of the composer’s rich harmonic, melodic and imaginative world.

This could be a difficult afternoon for the jury — two temperamentally similar musicians of consummate interpretative skill going at their tasks in a markedly similar manner, but with subtle differences. Neither was better than the other this afternoon, merely different.

END_OF_DOCUMENT_TOKEN_TO_BE_REPLACED

The Orpheus myth inspired French Baroque composers Jean-Philippe Rameau and Philippe Courbois to write expressive solo cantatas about the famous Greek musician-poet and his futile attempts — because of his own impatience — to rescue his beloved Eurydice from the grasp of Pluto in the Underworld. These are beautifully performed by the clear-voiced soprano Hannah De Priest and the velvet-throated baritone Jonathan Woody (who makes a walk-on appearance in the Rameau). END_OF_DOCUMENT_TOKEN_TO_BE_REPLACED

Now that live concerts are beginning to proliferate, it was delightful to hear Oberlin cello professor Darrett Adkins ring a change on the solo suite format with his Hypersuite No. 3 on September 28 in the Cirigliano Studio Theatre at Lorain County Community College. His program opened the new season of Signature Series performances in Elyria, and was dedicated to the memory of Eva Hornyak. END_OF_DOCUMENT_TOKEN_TO_BE_REPLACED