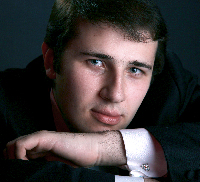 Has winning the 2013 Cleveland International Piano Competition changed Stanislav Khristenko’s life? “It definitely has,” the 29-year-old Khristenko said en-thusiastically during a recent telephone conversation. “At this point I feel very happy that I am able to do what I always wanted to do — and that is to play concerts.”

On Sunday, May 11 beginning at 8:00 pm in Kulas Hall at the Cleveland Institute of Music, Stanislav Khristenko will perform a recital that includes works by Chopin, Prokofiev, Bartók, Liszt, Zemlinsky and Ernst Krenek.

Khristenko points out that Sunday’s program centers around musical topics that are of interest to him. “One of my thematic interests is fantasies, which is also the title of my new CD. Alexander Zemlinsky’s Fantasies on Poems by Richard Dehmel is considered by many to be the composer’s most imposing piano work. Chopin’s Fantasy in F Minor fits into the fantasy theme as well.”

Khristenko opens the program with Bartók’s Piano Sonata, Sz. 80. “This was one of the important pieces for me during the competition. It’s kind of a reminiscence for me, as is Liszt’s Rhapsodie espagnole.”

The Adagio from Ernst Krenek’s Piano Sonata No. 3, Op. 92, No. 4 represents another of Khristenko’s musical interests. “I think Krenek is a very important composer in the 20th century. His third piano sonata was composed during his move to the United States from Nazi-occupied Vienna during World War II. I’m doing another recording project of all of Krenek’s works. One CD has already been released and a second was recorded in March. It’s only one movement from the sonata but I wanted to have it represented on the program.”

Prokofiev’s Piano Sonata No. 7, “Stalingrad,” represents yet another thematic interest. “I am very interested in how composers reacted to war. This sonata was written in 1943 during the Second World War, as was the Krenek sonata.”

As a result of winning The Cleveland International Piano Competition, Stanislav Khristenko was awarded a prize package that includes more than 50 worldwide engagements, a recital at New York’s Carnegie Hall, four years of management services and a recording by Steinway & Sons, in addition to a cash prize of $50,000.

On Monday, May 19, Khristenko will perform his debut recital at Carnegie Hall’s Zankel Hall. And his Steinway & Sons debut recording, Fantasies, is being released digitally today, May 6. Physical copies will officially be available on May 27, although advance CDs will be available for purchase at Sunday’s recital.

For the time being, Khristenko said that he has stopped entering competitions. “I’m not saying that it is forever, but I’m not saying it is going to happen either.” He finds that playing concerts is very different from playing in a competition. How does he describe the difference? “First, the goal is completely different – satisfying a jury is different from satisfying an audience. Yes, the audience is well-educated musically but most juries are comprised of teachers, and they listen differently. That is very different from what audiences experience and listen to at concerts. Being a performer and being a successful competitor are two different things.”

Khristenko finds the same is true about being a performer vs. being a recording artist. “To me these are also two different professions. I think anybody who is doing all three, or two of these things needs to understand that. And they need to approach them differently.”

Winning last year’s competition has also given Khristenko the opportunity to experience the business side of the industry, working closely with Della Homenik, CIPC’s Director of Communications and Artist Management. “Every pianist should have a Della,” Khristenko says with a laugh.” During this past January the two attended the Arts Presenters Annual Conference in New York. “Attending conferences gives classical musicians the opportunity to learn more about the business and to learn from the other art forms such as theatre and dance.”

Yes, winning the competition has indeed changed Stanislav Khristenko’s life. “But I am very happy,” he said, “and I’m enjoying the changes very much.”