There was plenty of piano music to be heard at Baldwin Wallace Conservatory during the ten days of the Cleveland International Piano Competition’s recent Young Artists Competition, but in addition to the performances by the twenty-five contestants, ages 12-18, four seasoned recitalists were invited to play solo programs as well. Mariam Batsashvili knows her way around international competitions, while Vassily Primakov, Sean Chen and Alexander Schimpf are veterans of CIPC itself.

Primakov (pictured above), who won second prize at CIPC in 1999, entertained the audience at the opening ceremony on May 12 with a program of Schubert and Liszt. He began with a set of twelve charming little Schubert Ländler compiled by Vera Gornostaeva, the Russian pedagogue who prepared some 50 international competition prizewinners, including CIM’s Sergei Babayan, before her death last January.

Primakov immediately turned from the simplicity of the dance suite to Schubert’s sprawling Fantasie in C (“Wanderer”). The pianist’s big, Russian style of playing was sonically impressive but seemed out of scale for Schubert. “Big” also characterized Primakov’s performances of Chopin’s Ballades No. 3 and 4 and the Nocturne Op. 48, No. 1, which were separated from the Schubert by what seemed like an unnecessary intermission. 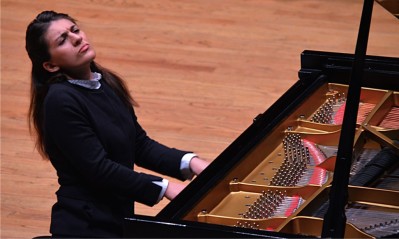 On May 16, Georgian pianist Mariam Batsashvili played Bach, Liszt, Liszt, Beethoven, Bartók, Liszt and Liszt — a program perhaps reflecting her wins at the Liszt competitions in Weimar (2011) and Utrecht (2014). To begin, Batsashvili played Bach’s arrangement of a Marcello oboe concerto with a deliberate sort of flair. Her Beethoven was an electrifying performance of the Rondo a capriccio (“Rage over a Lost Penny”), her Bartók an appropriately percussive performance of the musical perpetual motion machine entitled Allegro Barbaro.

These four pieces, which formed the majority of her program, gave Batsashvili a real workout, as evidenced by her obvious need to stretch her muscles before the Tarantella. The Handel was overwrought (Liszt’s doing), but Bathashvili gave an outstandingly lucid reading of the Dante sonata. The Hungarian rhapsody provided a nice contrast (exotic harmonies, scampering lines) and the Tarantella featured a surprisingly placid middle section where the pianist was able to relax and create some poetry for a change. 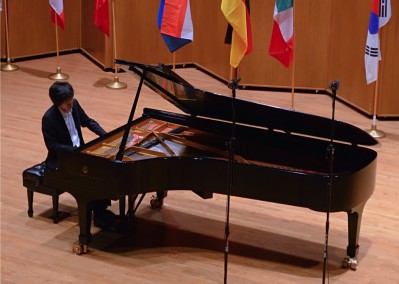 Sean Chen played a cleverly-designed program on May 17. After a lengthy opener — Brahms’s Variations on an original theme — Chen explained to the audience that he had arranged the next six pieces (all Études) in pairs according to topic.

Study pieces by Chopin (Etude in g-sharp minor, Op. 25, No. 6) and Debussy (Etude No. 2, “pour les tierces”) concern themselves with the interval of a third. Scriabin’s Allegro fantastico from Op. 85 and Bartók’s Study No. 1 from Op. 18 challenge the player to stretch the hand to encompass large intervals. Rachmaninoff’s “Lento lugubre” (Études-Tableaux, Op. 39) and Ligeti’s “L’escalier du diable” (Ètudes, Book II) are macabre tone poems. In the case of “The Devil’s Staircase,” Chen noted, the title also describes a disentanglement puzzle (known in French as “Baguenaudier” or “time-waster.”)

Having engagingly introduced the six pieces, Chen went on to play them with consummate skill and fluency. The two tone poems were standouts. Chen formed clear pictorial images in the Rachmaninoff, as dark-hued as the textures and gestures in the Ligeti were dazzling.

After intermission, Chen confessed that the vagaries of travel had left him short of time to prepare the Ravel Sonatine, so he offered Aaron Copland’s Piano Variations instead, noting that Leonard Bernstein had once said, “This is a piece that will clear the room.” Nothing of the sort; Sean Chen’s stunning performance brought out the work’s often submerged Coplandisms and clearly delineated its architecture.

Liszt’s arrangement of Wagner’s Overture to Tannhäuser provided a sonorous conclusion to Chen’s recital. Open textures and adroit pacing, fine transitions into animated sections and a beautiful denouement made Chen’s reading special. He seemed to have sprouted a third hand to help out with all those notes toward the end. Chen’s own Romantic-sounding arrangement of the Largo from J.S. Bach’s third violin sonata made a lovely encore.

The fourth artist recital was given by jury member and 2011 CIPC first-prize-winner Alexander Schimpf. He played only three works on his May 20 recital, but each was a major undertaking. 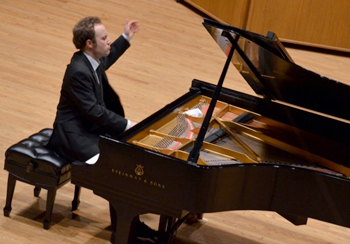 Schimpf began with Brahms’s 8 Klavierstücke, Op. 76, a collection of capriccios and intermezzos that allowed the recitalist to sensitively explore a range of emotions and textures.

Inviting the audience into the strange world of Alexander Scriabin, Schimpf next played the Sonata No. 7 (“White Mass”), written as an act of exorcism after the sixth sonata. Scriabin refused to play No. 7 in public, believing that it had become possessed by demons. The piece sets out to portray cosmic rapture and ecstasy in a blur of harmonies as atonal as anyone had conceived of in 1911. Schimpf played it with obvious relish and fluency. 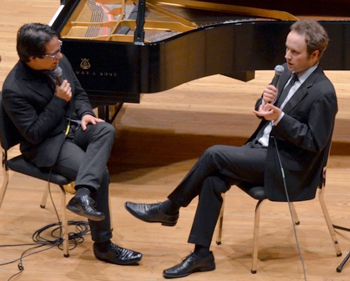 Continuing to explore strange worlds, Schimpf discussed Beethoven’s “Hammerklavier” sonata with Cleveland-based pianist and talented interviewer Zsolt Bognár, before launching into a performance of that intractable and largely inexplicable work.

The conversation was fun, especially Schimpf’s response to the question of how he went about learning the work — which he thought he’d better do now, because he was old enough to try to understand it, but still young enough to be able to play it. For one thing, he recorded it in sections at reduced tempos so he could more closely examine what lay under its surface. Bognár also asked about Beethoven’s controversial metronome markings. Schimpf agreed that to follow them would produce absurd results, but he thought that they mystically projected an ideal rather than a practical way to approach the piece.

Schimpf’s performance of the “Hammerklavier” was committed and masterful. He gave the protracted slow movement a sense of direction, and played the dizzy fugue with fluent accuracy. The audience rewarded his gigantic effort with a big ovation. Alexander Schimpf said “good bye” with something simple and touching: Egon Petri’s arrangement of J.S. Bach’s “Sheep may safely graze,” Pales’s aria from the hunting cantata, Was mir behagt.