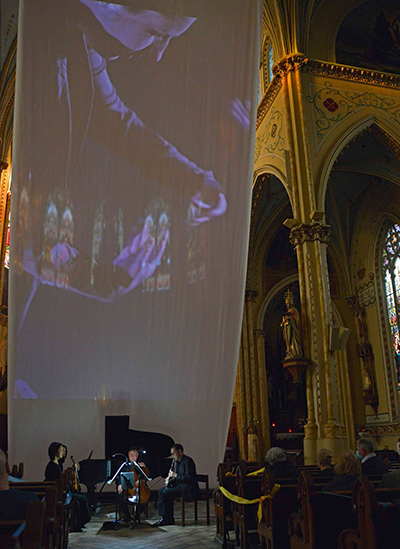 Olivier Messiaen’s Quartet for the End of Time is already a production in itself. The music alone, not to mention the circumstances of its composition, is a lot to untangle.

CityMusic Cleveland brought out the complexities of the piece in a multimedia performance on February 27 that incorporated dance, cinematography, and even the atmosphere of the venue.

A long white sheet hung from the vault to the floor and obscured the altar at the Shrine Church of St. Stanislaus on Sunday. The setting was sacred, and Messiaen’s inspiration was pointedly religious (his work quotes from the Book of Revelation), but there was something secular to the setup.

Stripping the scene of some of its opulence was a way to evoke the austere backdrop to the Quartet’s famous first performance. Messiaen wrote the piece for himself and three fellow inmates in a German prisoner-of-war camp, giving the premiere in January 1941.

So the apocalypse in the title suggests more than one thing: a Biblical vision, a wartime reality. The composer even accepted a third meaning, an artistic “end of days” that plays out in the music as it moves away from standard rhythm and harmony.

Pianist Donna Lee, who conceived of the project for CityMusic, provided the foundation through many of the work’s eight movements. From the unsettling ground of the opening to the dissonant duets with the cello and the violin, Lee struck the right balance between strong soloist and sensitive accompanist.

David Shimotakahara’s choreography illustrated what’s latent in the composer’s score. In the birdsong movement for solo clarinet, played to expressive extremes by Daniel Gilbert, the dancers showed all the agitation that can exist in a long tone and, in contrast, just how relaxed a flurry of notes can be. When the music was more straightforward, so was the dancing, with lifts that approached ballet complementing the conventional but charming “Interlude.”

The musicians went alone in the Quartet’s pivotal movements. For the “Dance of Fury,” the backdrop was lit a shade of red that grew more intense, though the group’s precise playing never quite threatened catastrophe. It was back to blue for the final movement, whose hopeful ending Lee and violinist Miho Hashizume pulled off convincingly.

Snatches of klezmer music color the first song, cued by a huge, Rhapsody in Blue-style glissando in the clarinet. “Water Song from the East Sea” immerses the piano in gentle, repetitive figures, set off by harmonics and other extended techniques in the strings. The final movement adapts “Amazing Grace” — cellist Keith Robinson’s delivery of the melody was a particular highlight — with the quartet coming together for a harmonized version in the end.

END_OF_DOCUMENT_TOKEN_TO_BE_REPLACED

The strings-only work by Berg has made relatively frequent appearances on the Orchestra’s programs. In 2021, the musicians recorded it for the In Focus series, and it appeared again on last year’s European tour. Friday’s rendition maintained the group’s characteristic light and effortless playing, each section blending as much as possible to echo the work’s original form as a string quartet. At fifteen minutes total, the piece is quite short, but the dense encoded musical meanings require some extra-attentive listening. Splitting up the three movements ensured that each one could be appreciated on its own. END_OF_DOCUMENT_TOKEN_TO_BE_REPLACED