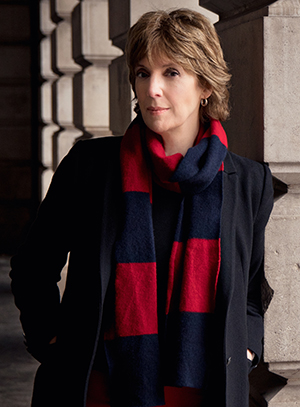 During the pandemic, the anxiety caused by an unknown future and the longing to return to normal have been beautifully expressed by thousands of people around the globe who participated in the Global Vaccine Poem project. Lines from these poems served as the inspiration for British composer Cecilia McDowall’s On the Air (Dear Vaccine).

Commissioned by the Cleveland Chamber Choir, the work will receive its premiere on Saturday, February 26 at 7:00 pm at Amasa Stone Chapel and on Sunday, February 27 at 5:00 pm at Waetjen Auditorium under the direction of Scott MacPherson. The program, “Cecilia and Her World,” will feature nine of McDowall’s works along with music by composers who have influenced her style.

Joining CCC will be choirs from Cleveland, Kent, and Youngstown State Universities as well as Case Western Reserve University. A pre-concert talk, “In Conversation: Cecilia McDowall with Charles Edward McGuire,” will begin 45 minutes before each performance. Both concerts are free. Click here to download the program and here for COVID-19 protocols.

The Global Vaccine Poem project is the brainchild of David Hassler, director of Kent State University’s Wick Poetry Center, and Tyler Meier, executive director of the University of Arizona’s Poetry Center. So far, the project has received over 2,200 poems from people in 118 countries and every state in the U.S.

“Choral music depends on a fusion of good poetry and the composer’s ability to tell that story,” Scott MacPherson said during a telephone conversation. “I think Cecilia’s ability — the creativity and clarity in which she sets text — is parallel with Benjamin Britten.”

The professional relationship between MacPherson and McDowall began when the two met at an American Choral Directors Association conference. “I visited the Oxford University Press booth, her publisher, and Cecilia was very kind. I remember her giving me a bunch of music — both hers and that of other composers,” MacPherson recalled.

When he was searching for music for the first concert of his newly-created Cleveland Chamber Choir, he said he contacted McDowall and she suggested When Time is Broke: Three Shakespeare Songs. “I’ve programmed her music on at least one of our concerts every season since.” MacPherson noted that Saturday’s and Sunday’s programs will open with the combined choirs singing Mack Wilberg’s Cantus in Harmonia. “It is a hymn to St. Cecilia and I have teasingly called her St. Cecilia in some of my emails.”

Cecilia McDowall is the recipient of the British Composer Award for Choral Music in 2014 and the Ivor Novello Award for Outstanding Works Collection in 2021. This past December she was chosen to compose a new carol, There Is No Rose, for King’s College Cambridge’s annual Nine Lessons and Carols service on Christmas Eve.

Like many people, the composer said it was difficult to stay focused during the lockdown. “I found that I was unable to do anything,” McDowall said during a Zoom conversation. “I felt like I was living in a vacuum, and I was quite interested to hear that other artists had a similar problem. As a creator, it made me realize we are very dependent on what is going on around us for inspiration.”

Things were made easier for McDowall when a number of choral conductors asked her to take part in Zoom sessions. “It was a revelation to see the work that choirs were doing to keep their members involved. For choirs it was a time to explore new ideas and other people’s work, and that was quite interesting.”

Regarding the CCC commission, On the Air (Dear Vaccine), the composer said although she can’t take responsibility for the concept, she does think it is an ingenious idea. “In one of Scott’s emails he said that Kent State’s Wick Poetry Center had a new website that was part of a Global Vaccine Poem project. I found it so interesting that the website allowed people who were going through difficult times to express themselves. It was very intimate and personal.”

After reading some of the poems, McDowall turned to her longtime collaborator, British poet and broadcaster Seàn Street. “He’s an ingenious man and I’ve often said to him, ‘If I give you some words, can you put them into a poetic context?’ So I asked him if he would have a look at the website. He was so sensitive. He’s taken strands of words that people have posted and structured them into a poem that moves from a moment of anticipation all the way through to a moment of real hopefulness.”

She gave full credit to Seàn Street for the work’s title. “As I said, he is a broadcaster, so for him the words ‘on the air’ have a double meaning — aerosol particles, but also broadcasting.”

Speaking of titles, I asked her about “Cecilia and Her World.” How does she describe her world? She said that hers is a late starter’s world. Although she had always composed in “one form or another,” it was not until her late 40s that she decided to dedicate herself to composition.

“I began by writing chamber music,” she said. “But choral music has always been something that I’ve been very passionate about. I’ve sung in many choirs, some semi-professional. And Trinity College is close to Westminster Abbey so whenever we had a celebration we sang there, which had quite a profound effect on me — singing in the organ loft and enjoying the liturgical atmosphere. But I found that once I began writing choral music, people asked me to write more choral music. So I have written a lot in that genre because I’ve been commissioned to do so — and I love it. So really I came to everything very late and I’ve been trying to catch up ever since.”

What advice does McDowall have for composers who want to try their hand at writing choral music? “One of the first things for anybody who is setting words to music is to make sure they are good words. In theory any choral composer can set anything — even a menu or shopping list. But if someone is going to spend time setting text to music, those words really need to mean something.”

Another bit of advice: get as many performances as possible. “I’ve worked with the BBC Singers in conjunction with composition students. As the teacher, I can say whatever I want, but it’s what the singers have to say that matters most.”

Winding down our conversation, McDowall quoted Gustav Holst’s advice for composers — “never compose anything unless the not-composing of it becomes a positive nuisance to you.”

These concerts are sponsored in part by the Tri-M Foundation, Cuyahoga Arts & Culture, and the Ohio Arts Council, and presented in partnership with Case Western Reserve University and Cleveland State University.

END_OF_DOCUMENT_TOKEN_TO_BE_REPLACED

Rodgers & Hammerstein’s Cinderella was originally produced for television in 1957 — seven years after the animated Disney film was released — and starred Julie Andrews. According to the Rodgers & Hammerstein website, it was viewed by over 100 million people. END_OF_DOCUMENT_TOKEN_TO_BE_REPLACED

The story line has its origin in an 1855 play and an 1842 farce that Thornton Wilder mined for his 1938 play The Merchant of Yonkers. When that turned out to be a flop, in 1954 Wilder made the crucial decision to re-center the show around the character of the legendary marriage broker Dolly Gallagher Levi and renamed it The Matchmaker. END_OF_DOCUMENT_TOKEN_TO_BE_REPLACED

The Dodero Center for the Performing Arts at the Gilmore Academy in Gates Mills is one feature of an impressive campus. The auditorium is shallow, the stage is deep, and the ensemble played without a shell. Throughout the program, the sound, especially in instruments’ lower registers, tended to disappear. END_OF_DOCUMENT_TOKEN_TO_BE_REPLACED