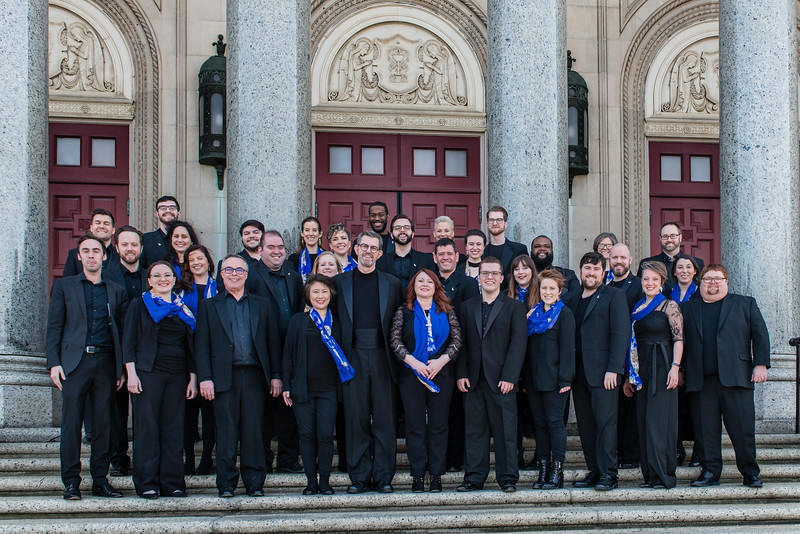 When you hear the word madrigal, for many what first comes to mind are those dinners where the performers and guests dress in Renaissance costumes. While those events continue to flourish, especially during the Yuletide season, on Saturday, May 15 at 7:30 pm the Cleveland Chamber Choir will remind us that the writing of these part-songs has never stopped.

“Madrigals of All Times” features works by European and American composers from the 16th century to today and includes premieres of madrigals by Dolores White and Adolphus Hailstork. The pre-recorded concert can be viewed on Facebook and YouTube and following the premiere, will remain available on-demand.

In a recent conference call, CCC artistic director Scott MacPherson and managing director Kira McGirr noted that this is not the first time the Choir has presented madrigals with an updated twist. The first was “March Madrigal Madness” in 2019 where the program was organized in a bracket like the famed collegiate basketball tournament. “It was super successful,” MacPherson said. “The singers and I had a lot of fun putting it together.” 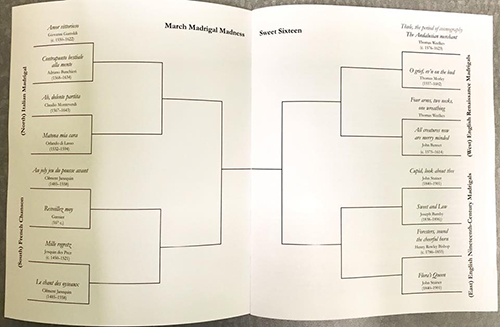 The idea for “Madrigals of All Times” came about while revisiting some programs that were planned prior to the onset of the pandemic. “We wanted to see what could work for this year, and a madrigal program lends itself to a reduced choir of twenty singers,”  MacPherson said.

With CCC’s ongoing commitment to amplifying the voices of diverse composers, MacPherson began searching for non-idiomatic choral music — not spirituals or gospel — by Black composers. “I was fortunate to find a database (Beyond Elijah Rock) that was created by Marques Garrett. So I contacted him and said I was looking for any piece that looked like a Renaissance madrigal text.”

One of the first pieces MacPherson discovered was Adolphus Hailstork’s The Silver Swan. “I wanted to pair Renaissance with modern-day madrigals because I think the audience will enjoy seeing what a Renaissance composer and a modern composer do with the same text. And of course there’s the famous Orlando Gibbons setting of that text.”

Hailstork’s Silver Swan will be paired with his setting of Cease Sorrows Now, and the program also includes Thomas Weelkes’ setting of that text. “Hailstork wrote them in 1970 but they were never performed. When I contacted him to get permission to perform them, he told me he thought they had been lost.”

Dolores White composed her Three Madrigals in memory of her husband, Cleveland Orchestra cellist Donald White, who passed away in 2005. “I think Dolores’ pieces — Death be not proud, Alas, this life, and The Expiration — are the ones that are going to sound the most modern,” McGirr said. “All three are virtuosic, and the choral writing is so sophisticated. It’s great to get to sing music by such a renowned living composer, who is also a Cleveland-based composer, a woman composer, and a Black composer. We feel so honored to be premiering these pieces.”

Another work by a Cleveland composer will be Andrew Rindfleisch’s setting of Mille regretz. “Andrew teaches at Cleveland State, and I’ve been an advocate of his for a long time,” MacPherson said. “I commissioned this from him, I don’t remember how many years ago now. It’s one of my favorite pieces of all of his choral music. The words and the music work so well together.” Rindfleisch’s version will be paired with Josquin des Prez’s setting of the same text.

The program is rounded out with music by John Bennet, Morten Lauridsen, Johannes Brahms, Vittoria Aleotti, and John Stainer.

McGirr said that it’s interesting to hear how the modern composers reference 16th-century harmonic language and turn it into their own creation. “For example Lauridsen takes harmony from the late 19th and early 20th century like Fauré and Ravel in Dirait-on and makes it sound like a French folk song — but it’s entirely his own creation.”

After so much talk about madrigals I was curious to hear how MacPherson and McGirr actually define a madrigal. “That’s a question I often give to my students during oral examinations for choral conducting,” MacPherson said. “When you say madrigal, you most often think of the Renaissance art form. But like many other musical forms for vocalists at the time, they were looked on as poetic forms.”

McGirr said that madrigals are pieces where music and poetry are equal partners. “It’s pure poetry set to music regardless of the subject. Monteverdi’s brother, Giulio Caesare Monteverdi, is reported to have said that ‘the music is the servant of the text, and the text is the mistress.’”

A portion of donations for “Madrigals of All Times” received from May 15 until June 1 will be used to support the mission of the YMCA of Greater Cleveland.

Published on ClevelandClassical.com May 5, 2021.

END_OF_DOCUMENT_TOKEN_TO_BE_REPLACED

Tower dedicated this surprisingly brief work to “women who take risks and are adventurous.” Adventurous to be sure. While the opening theme is a subtle echo of Copland’s, the CSO brass was remarkably bright, crisp and crackling in its relentless morphing of the motif into quick, layered variations, both delicate and discordant, robustly spiced with startling bursts of timpani. END_OF_DOCUMENT_TOKEN_TO_BE_REPLACED