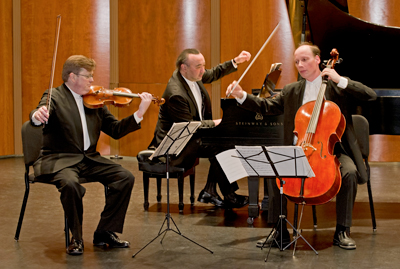 When cellist Clive Greensmith last visited the Cleveland Chamber Music Society in November of 2012, he appeared with the Tokyo Quartet. Soon thereafter, when that ensemble’s longtime members Kikuei Ikeda and Kazuhide Isomura decided to retire, Greensmith and violinist Martin Beaver at first decided to audition a new violinist and violist, but later resolved to let that estimable quartet fade into chamber music history. Then, a conversation with Jon Kimura Parker, the Tokyo Quartet’s frequent collaborative pianist, led to the creation of a new piano trio which eventually took on the name of the musicians’ favorite French wine, Chateau Montrose. (Beaver also spent part of his childhood on a Montrose street in Canada, and Parker teaches at Rice University in Houston near the district of Montrose.)

Thus a former string quartet has both downsized in numbers and broadened its instrumentation. The Montrose Piano Trio will play its Cleveland debut to open the 67th season of the Cleveland Chamber Music Series at Plymouth Church in Shaker Heights on Tuesday, September 27 at 7:30 pm. We reached cellist Clive Greensmith by telephone in his studio at the Colburn School in Los Angeles, where he and Martin Beaver co-direct the chamber music program, to talk about the new Trio and its program next week.

Daniel Hathaway: A cellist has a very different role in a piano trio than in a string quartet. Can you tell us how that transition feels for you?

Clive Greensmith: To put it in a very curt way, the major difference I think I’ve been noticing is that I get to play on the “A” string again. There’s a greater equality of voicing among the instruments, and it’s a very welcome chance to develop that part of my own playing — as well as having the excitement of being able to play with a wonderful pianist. And although the repertoire is from the same creative sources — Haydn, Schumann, Brahms — the medium is different, and to achieve the proper balance, the cellist needs to play in a slightly different way. That’s fascinating, and I love the way that I can work with Jackie to become an extension of his left hand when we’re playing early Beethoven. It’s a wonderful new challenge.

DH: And you can consider yourself lucky that you’re not the pianist in your middle piece, Beethoven’s Op. 1, No. 1.

CG: You’re correct that it doesn’t get played very much, but there’s a lot to be said for the piece — and also for Turina. He’s a bit of an unsung hero in a way. He’s very prominent in that small but important Spanish part of the repertoire. The Second Trio is a mature piece from 1933, and you can certainly hear the influence of the time he spent with Ravel, Debussy, and Fauré in Paris. But there’s also a distinctly Spanish flavor to it — the melodic intervals, the chord progressions. And there’s that wonderful Scherzo in 5/8 time. He does his best, rather like César Franck or Debussy would have done, to tie the piece up by bringing themes back. It has an absolutely irresistible charm to it, as well as great depth. And invariably, it contrasts really well with anything else you put around it.

DH: You’re ending with Brahms’s First Trio, which he revised some 35 years after he wrote it. Have you had the opportunity to play both versions?

CG: That’s something we discussed. It seems to be more in vogue again for groups to perform the original version. I can see why. And it’s interesting that Brahms never destroyed the earlier version. He left it in print, which says something about the fact that the early version does have its own merits. But there’s no denying that what you get in the second version is more concise and more tightly organized — which is one of the things that we all love about Brahms. But I also love the early version because it’s so daring and he lets the fantasy part of his craft take flight. It would be fun one day to play both versions in the same evening!

There’s that wonderful quote from Richard Specht about the first version where he describes the piece as “the whole twenty-year-old composer with all his inner stress, his fullness of heart, his ardent longing; all the apprehension, pride, restraint, and expectation of a soul in flower.” At the time, Brahms had just met the Schumanns, so the first version is incredibly important. But we will be playing the second version in Cleveland, which is one of the most satisfying pieces in the repertoire. The progression from one movement to another is just breathtaking, and the last movement is absolutely wondrous and incredibly exciting.

DH: You and Martin see each other all the time at the Colburn School, but how often are you able to get together as a trio?

CG: We’ve been very fortunate. In our first season, we had at least 25 concerts, and we’ve been working together over the summer. We played our first Schubert B-flat Trio for the La Jolla Music Society in August, and we played at the International Chamber Music Festival in Hong Kong last year. We always take time in advance to meet up either in Houston or Los Angeles, or we’ll arrive early somewhere to rehearse. Martin and I are constantly working together, so we’re able to resolve important string issues between the two of us. We’re building on a fifteen-year relationship that included eleven years with the quartet, so it’s that much easier to put pieces together on relatively short notice.

CG: Cleveland is one of the most sophisticated and enthusiastic of audiences. We’re very excited to be playing there again.

Northeast Ohio’s Les Délices has long been that rarest of beasts: a world-class organization so proud of its region (ours) and repertoire (distinct niches in pre-1800 music) that it never tries to be everything to everyone, paradoxically making a strong case for a broad, curious international following. In the December episode of its SalonEra series, the ensemble embraces its strengths and community to marvelous effect. END_OF_DOCUMENT_TOKEN_TO_BE_REPLACED

END_OF_DOCUMENT_TOKEN_TO_BE_REPLACED

Another I remember fondly is Gian Carlo Menotti’s Amahl and the Night Visitors.  Commissioned by NBC, the one act, made-for-television opera, premiered on December 24, 1951, at the network’s studios in New York’s Rockefeller Center. And now, through the wonders of technology, Cleveland Opera Theater has created a magical new production of the work which is available on demand through January 6, 2021 (Three Kings Day). END_OF_DOCUMENT_TOKEN_TO_BE_REPLACED

Jessen has now followed up with her second solo CD, Winter Chapel. Recorded on January 17, 2020 in Oberlin College’s Fairchild Chapel and available on Carrier Records, the album is a continuum in Jessen’s journey to push the musical boundaries of her instrument and herself as an improviser. END_OF_DOCUMENT_TOKEN_TO_BE_REPLACED