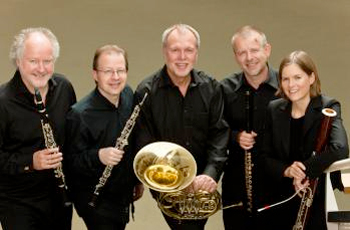 It’s a great time of year for woodwind quintets in Northeast Ohio. Last week, Tuesday Musical brought the Imani Winds to E.J. Thomas Hall, and on Tuesday, February 7, the Cleveland Chamber Music Society will welcome the Berlin Philharmonic Wind Quintet back to Plymouth Church for their latest appearance on the Society’s series.

I recently spoke with Fergus McWilliam by telephone from Berlin. Born in the Scottish Highlands, McWilliam was enraptured by the horn as a small child when he attended his first orchestral concert at the Edinburgh Festival. His family emigrated to Canada, where McWilliam made his first solo appearance at the age of 15 with Seiji Ozawa and the Toronto Symphony. After a variety of positions in Canada, the hornist joined the Detroit Symphony, later moving to Germany to play with the Bavarian Radio Symphony and other ensembles in Munich. Herbert von Karajan appointed him to the Berlin Philharmonic in 1985, setting the stage for the birth of the Berlin Philharmonic Wind Quintet. I began our conversation by asking McWilliam how that ensemble got started.

Fergus McWilliam: It’s all the fault of our clarinetist, Walter Seyfarth. I was a founding member, but it was his brainchild. You know the expression, “Necessity is the mother of invention?” Walter had made a commitment to someone in Berlin who ran an old, Viennese-style coffee house that he would bring around some colleagues one Friday night to play after the theaters closed. That was the custom at the Einstein Kaffeehaus, and you’d get a free drink out of it. This was way back in the days in West Berlin when the Wall was still standing.

So Walter turned around one day in a rehearsal and talked to some of us wind players, and we agreed to play some wind quintet licks. There was absolutely no expectation that it was going to turn into anything more substantial. We were all very new in the Philharmonic and hardly knew each other, but the chemistry was immediately apparent. The audience loved it so much that they wanted us to come back and do a full-length concert there. We did, it was completely sold out, and one thing led to another. We’ve been going ever since. It’s now been 28½ years.

DH: You’re about to embark on a United States tour that will take you to twelve cities in nineteen days.

FMW: It’s a challenging tour for us this time, one of our longest and busiest. We travel from the East to the West Coast, we’re in Cleveland and Rochester on the north end of the country, and we get down to South Carolina. This will be our sixteenth tour to the States. Imagine!

DH: And not your first appearance on the Cleveland Chamber Music Society series.

FMW: Yes, I believe we first played at a church in the center of town. This may be the third time for us where the series is held now. It’s a very loyal audience. We love playing for these people.

DH: Anton Reicha’s name appears all the time on woodwind quintet programs, but not with the piece you’ll be playing next week.

FMW: Reicha wrote three of these Andantes. They’re absolutely gorgeous music. This one is a delightful intermezzo that features the English horn, an instrument Nielsen also uses in his Quintet.

Reicha and Danzi were the first composers to establish the sonorities of the wind quintet. Reicha was credited with having invented the idea, and Danzi came along with his wind quintets fifteen or twenty years later, continuing in the same tradition. As a result, their contributions were huge to later composers like Beethoven and Carl Maria von Weber, who were strongly influenced by Reicha and Danzi. So these guys really provided the palette and the tools that later composers were able to access. Our entire orchestral repertoire owes a great debt to both composers for their exploration of wind instruments. 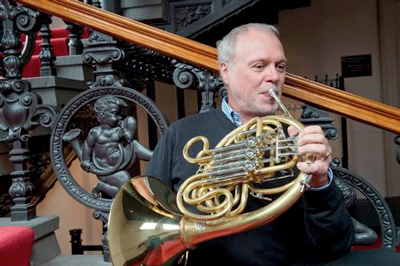 FMW: He’s a very prolific composer who has written hundreds of works.

FMW: He works incredibly quickly, and he writes with a pencil on paper, not with a computer. It’s amazing — music comes straight out of his head. Like Mozart, he can conceive of a piece in one flash and just write it down. Our record company, BIS in Sweden, has undertaken the huge project of recording all his works. They approached us, asking us to record the first quintet, which we did and that recording has yet to be released.

We brought the first Aho on tour to the U.S. and we experienced the remarkable success his music has with audiences in all kinds of places — small, rural communities or big, urbane venues. We’ve taken it to Korea, to England, to Germany — all kinds of different cultures — and everywhere we’ve gone, the piece has been a massive success. We were so thrilled with it that we agreed to commission a second quintet from him.

DH: Did you commission the first quintet as well?

FMW: No, and I’m not sure it was even a commission. It was performed once by a Finnish group who decided it was too difficult and put it aside. We love a challenge. We got it together and managed to perform it all over the place and recorded it for BIS as part of the Aho cycle. Aho was so pleased that he was willing to write a second one for us, and the two will be combined on a CD that’s now in the editing process. I’m also being challenged by his horn concerto right now.

DH: And then you’ll play the Ligeti Bagatelles.

FMW: He wrote two works for wind quintet. The Six Bagatelles is the more popular and the more approachable. It’s based on piano pieces he wrote back in the 1950s. His other work, Ten Pieces from the 1970s, is a very angular, challenging piece, much more in the tradition of the Ligeti we know. It’s such a powerful piece both acoustically and musically that it’s very difficult to program. You can sort of kill a concert with it. There’s really only one place you can put it — at the end of the first half, so the audience can recover during intermission. It’s not all that suitable for touring, but the Bagatelles are always a huge hit with the audience.

DH: Of course, the Nielsen Quintet is a standard, but it’s not an easy piece.

FMW: It’s a virtual symphony for five instruments, extremely rich in its tonal palette and enormous in the size of its expression — like his big, craggy, almost monumental symphonies. Even though he’s writing for quintet, he still brings out the giant architecture, the range of expression, and depth of color. It’s quite extraordinary what an orchestral experience he can get out of five instruments.

DH: I can see that you haven’t set yourself an easy task with this program.

FMW: That’s sort of been our reputation. We’re the madmen of the wind world, always pushing the envelope. Even after 28 years, we haven’t slowed down.

The cimbalom was the feature of the show, an instrument capable of taking on many personas. Its performer, Chester Englander, has shaped his career around the instrument, and has inspired composers to write more repertoire for it, some of which was presented on the program. END_OF_DOCUMENT_TOKEN_TO_BE_REPLACED

You wouldn’t expect that acoustic from a glance at the nave, which is wide and long, but not especially lofty. But when I guest conducted a local amateur choir and professional orchestra in Beethoven’s Mass in C there a few years back, during the first rehearsal we released the final chord of the “Gloria” and listened in astonishment for the next several seconds. The sound continued to roll down the space like the big wave that surfers dream about. END_OF_DOCUMENT_TOKEN_TO_BE_REPLACED