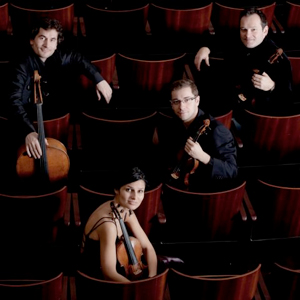 Pity poor Johannes Brahms, whose op. 51, no. 1 quartet came last on the program played by the excellent Belcea Quartet on the Cleveland Chamber Music Society series last Tuesday evening at Plymouth Church. He didn’t really stand a chance after the emotionally wrenching performance the quartet had just given of Alban Berg’s Lyric Suite.

In his spoken remarks from the stage, violist Krzysztof Chorzelski noted that Berg came along during the period “when composers stopped writing beautiful music.” Believing that there was nothing left to say in the tonal language they inherited from the nineteenth century, composers began writing in “the dreaded atonal style, then in the even more-dreaded twelve-tone system.”

But this was no reason to despair or run to the exits. Chorzelski promised the audience that Berg had written “immense sentiment and sensuality into the sad, dark story” of the Lyric Suite.

That’s very true. The six movements of the quartet detail an immense range of human emotion in the context of the impossible romance between Berg and Hanna Fuchs-Robettin, two people who happened to be married, just not to each other.

Happily, you can forget — as Berg said he wanted us to in Wozzeck — all of the intellectual and technical underpinnings that hold his music together. His music breathes with as much passion as that of any Romantic opera composer, and the Lyric Suite keeps the listener in thrall for more than half an hour.

Whether they were playing spooky motives in the Allegro misterioso or crafting wonderful climaxes in the Adagio appassionato, the Belcea were both sonically and visually riveting, playing with complete immersion and dedication.

At the beginning of their program, the quartet offered the good-sized audience a warm and intense reading of Mozart’s last string quartet, K. 590 in F, paying extravagant attention to every motive and melodic detail while linking them into their larger context.

The short but eventful minuet led to a finale full of humorous Mozartean interruptions and sudden harmonic twists and juxtapositions. Throughout, the Belcea explored the whole gamut of available dynamics, adding yet another dimension to a thoroughly insightful performance.

Brahms had the second half of the program all to himself. Even after the interruption of an intermission, and no matter how stunningly his c-minor quartet was played, Berg was still in the ears and in the soul. But the Belcea regrouped and found appealingly different ways to play with a rich but nuanced tone — one that turned beguiling reedy in the second movement Romanze.

Some patrons opted out of the Brahms: the audience noticeably thinned out before intermission was over. Perhaps for them the Berg did prove to be the psychic culmination of the evening. Or perhaps they merely had an eye on the clock. With much talking from the stage during the first half on Tuesday evening, the concert already promised to stretch beyond two hours, which for many is a bit too long.

Jackson began the program with a recitation of Langston Hughes’ poem “Helen Keller” — the first of five poems by Hughes that served as interludes between each piece on the first half. END_OF_DOCUMENT_TOKEN_TO_BE_REPLACED

Pianos with pins and tape on strings, a bass drum and tam tam, crotales, Almglocken, and vibes. Microphones were hooked up all around the instruments. The feed was sent to speakers around the room. Lighting designer Nicholas Houfek hung incandescent globes over the arrangement of instruments from thin black wires stretching across the beams. END_OF_DOCUMENT_TOKEN_TO_BE_REPLACED

From the podium, Elim Chan set an ambitious tone for the evening. The rising star conductor, here in her Cleveland Orchestra debut, has a commanding style, and every twist and turn in Saturday’s performance tracked closely with her baton. END_OF_DOCUMENT_TOKEN_TO_BE_REPLACED