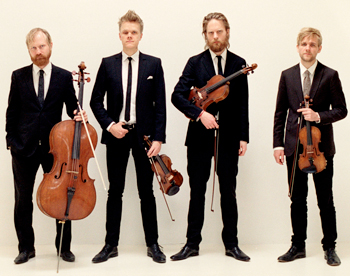 What’s a string quartet to do when their cellist is running late for a concert? Vamp until ready, of course. Before their October 10 debut on the Cleveland Chamber Music Society Series, Danish String Quartet violist Asbjørn Nørgaard and violinist Rune Tonsgaard Sørensen entertained the audience at Plymouth Church with an informative little off-the-cuff pre-concert lecture, charmingly laced with dry Danish humor and musical examples.

Some fifteen minutes later, once Fredrik Schøyen Slölin had arrived (“he’s changing clothes in the back seat of a car,” they quipped) they joined him and violinist Frederik Øland in a brilliantly-played program of Bartók, Nordic folk music, and Beethoven that drew wild cheers and foot stomping in the balconies from an audience well-supplied with young fans. It would be difficult to imagine a more auspicious way to begin a chamber music season.

The quartet immediately showed their mettle in a breathtaking reading of Béla Bartók’s first quartet — not an opener for the faint of heart. Their playing was robust and clean, and full of dramatic contrasts in volume and color. The quartet’s astonishing unanimity of phrasing, coupled with a single-minded approach to managing crescendos and diminuendos, added a gloss of sophistication to the visceral excitement they brought to the music.

The three Danes and their Norwegian cellist are enthusiastic about Nordic folk music, the subject of two recent recordings. After the Bartók, which includes references to Hungarian folk melodies, they moved into the real thing with four of their own arrangements of traditional music, including a tune from the Faroe Islands, The Dromer, a bittersweet little song simply played over pizzicato accompaniment, and a fiddler’s reel that might have been birthed in Celtic lands.

Beethoven’s lengthy Quartet No. 7, Op. 59, No. 1, sped along in a fresh-sounding, compelling reading by the DSQ, who cast all of the composer’s thematic permutations in the first movement into sharp relief, pointed up all the surprises in the second movement quasi-scherzo, and luxuriated in the elegiac gestures of the third movement Adagio. Connected by an arresting cadenza from the first violin and alternating spirited and wistful musical material, that last movement also quotes a Russian tune introduced in honor of Count Andrey Razumovsky and his two inlaws, the dedicatees of Beethoven’s Op. 59 quartets. Its super fast ending brought down the house.

After several callbacks, the Danish Quartet sent the audience out into the uncommonly warm fall evening with a beautiful, unassuming little encore by Carl Nielsen.

Jackson began the program with a recitation of Langston Hughes’ poem “Helen Keller” — the first of five poems by Hughes that served as interludes between each piece on the first half. END_OF_DOCUMENT_TOKEN_TO_BE_REPLACED

Pianos with pins and tape on strings, a bass drum and tam tam, crotales, Almglocken, and vibes. Microphones were hooked up all around the instruments. The feed was sent to speakers around the room. Lighting designer Nicholas Houfek hung incandescent globes over the arrangement of instruments from thin black wires stretching across the beams. END_OF_DOCUMENT_TOKEN_TO_BE_REPLACED

From the podium, Elim Chan set an ambitious tone for the evening. The rising star conductor, here in her Cleveland Orchestra debut, has a commanding style, and every twist and turn in Saturday’s performance tracked closely with her baton. END_OF_DOCUMENT_TOKEN_TO_BE_REPLACED