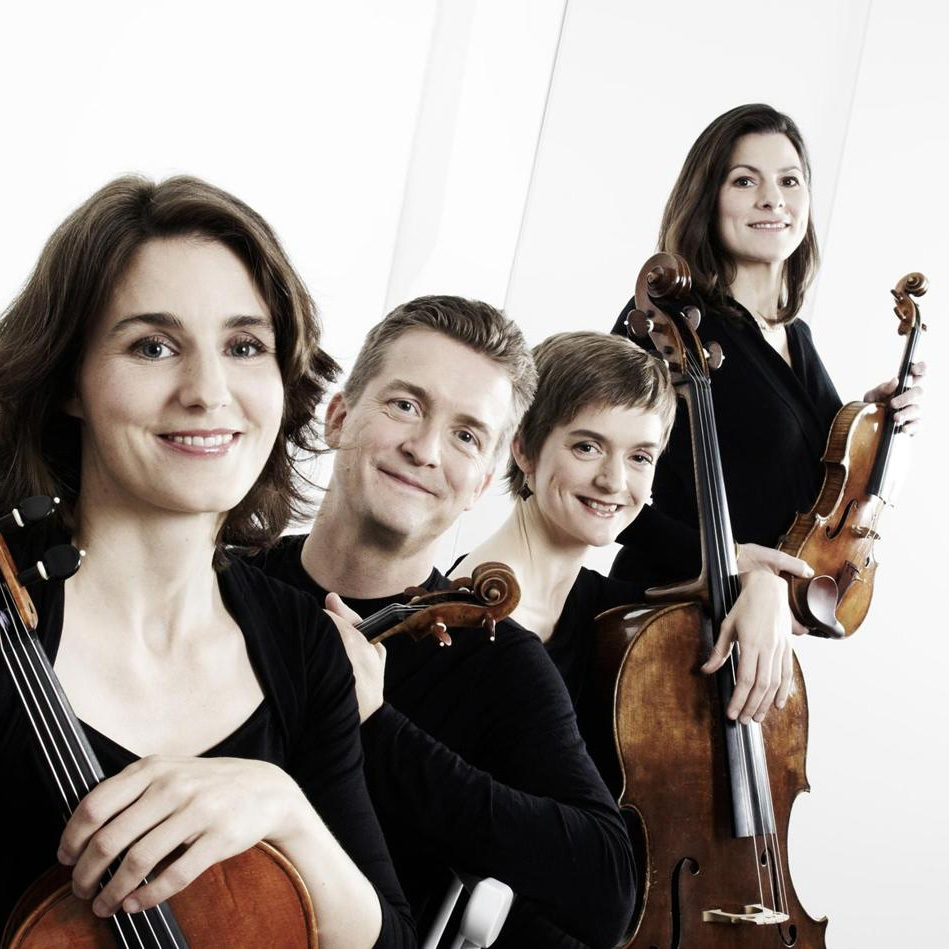 The distinguished German violinist Christian Tetzlaff has visited Northeast Ohio several times recently as soloist with The Cleveland Orchestra and to appear on the Oberlin Artist Recital Series. On Tuesday, November 14, he returned to town in a different role — as primo violin with his quartet in a remarkable concert on the Cleveland Chamber Music Society Series at Plymouth Church. (Since this photo was taken, the violinist has acquired both a Van Dyke and a ponytail.)

Unlike most standing string quartets, the Tetzlaff Quartet — which includes second violinist Elisabeth Kufferath, violist Hanna Weinmeister, and cellist Tanja Tetzlaff — only gets together a few times each year to rehearse and tour together. So completely do they agree on their interpretation and so polished are their performances, you’d never suspect that they weren’t rehearsing and playing together 24/7/365.

One factor that may help contribute to the Quartet’s overall sheen and unanimity is that the ensemble’s violins and viola are the work of a single maker, German luthier Stefan-Peter Greiner, who currently plies his trade in Hampstead, London — but doesn’t make cellos. Although the four musicians achieved a vast range of color and timbre on Tuesday in music by Mozart, Berg, and Schubert, overall the upper strings sounded more mellow and — forgive the phrase — less high-strung than most violins and violas, old or new.

Beginning with Mozart’s E-flat Quartet, K. 428 — one of the six “Haydn Quartets” from 1783 — the Tetzlaff impressed with their treatment of the opening unison melody, and their ability to achieve both a sense of tension and relaxation.

Returning to one of the first pieces they learned as a quartet, the Tetzlaff ended their concert with Schubert’s great Quartet No. 15 in G, dating from 1826. Here the ensemble achieved the greatest range of sounds and colors of the evening. Visiting the whole continuum between lean and warm, they used vibrato sparingly — and in high passages used none at all, lending an eerie sheen to their sound.

Pointing up Schubert’s vacillations between the major and minor forms of his opening tonality as a real structural device, the Quartet managed to bring the dynamic shifts of the first movement, the turbulence of the second, the charm of the scherzo, and the persistence of the fourth-movement tarantella under one roof.

Basking in a warm ovation for its debut in Cleveland, the Tetzlaff Quartet gave the audience a luminous extra: a buoyantly expressive performance of the Cavatina from Beethoven’s Op. 130.

END_OF_DOCUMENT_TOKEN_TO_BE_REPLACED

The strings-only work by Berg has made relatively frequent appearances on the Orchestra’s programs. In 2021, the musicians recorded it for the In Focus series, and it appeared again on last year’s European tour. Friday’s rendition maintained the group’s characteristic light and effortless playing, each section blending as much as possible to echo the work’s original form as a string quartet. At fifteen minutes total, the piece is quite short, but the dense encoded musical meanings require some extra-attentive listening. Splitting up the three movements ensured that each one could be appreciated on its own. END_OF_DOCUMENT_TOKEN_TO_BE_REPLACED