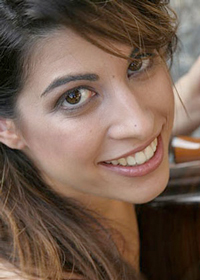 On their website, the Cleveland Classical Guitar Society describes Gaëlle Solal as having “a big personality and energy beyond compare.” I’d like to second that, because within the first five minutes of our Skype conversation I quickly realized that the dynamic French classical guitarist loves nothing more than life itself.

In addition to being an award-winning performer, Gaëlle Solal is also an accomplished arranger. Except for the Turkish folksong, all of the selections on her program are her own arrangements, and she laughs when asked why she puts herself through all the trouble. “I think of it in the opposite way,” she said. “When I played other people’s arrangements I was never quite sure why they chose to do what they did. And so many published parts are full of mistakes that go unfixed for years. So I thought, why not do it myself. I also did a master’s in jazz and world music in Germany, and arranging was part of my final exams. So in way it was a mix of wanting to do them and having to do them.”

Solal’s decision to pursue the study of jazz and world music came after she was invited to play in a guitar, clarinet and percussion trio who performed a combination of classical, jazz and world music. “I found out that I was to be in charge of arranging, but there was a big problem — I couldn’t read a jazz chart, I had never arranged for a trio before, and, there was no music for many of the folk songs we wanted to play. So we would listen to the recordings a thousand times and try to write them out. I soon discovered that I had no skill whatsoever, so I decided to do something about it.”

What she did was to contact a teacher she knew in Germany who invited her to come for lessons. “He also told me that he teaches in a masters program which would provide me with even better schooling. So I said, OK, and I quit my teaching job in Spain and moved to Germany.”

Solal recalled the first few months as being quite difficult, although things got better once she realized that she had to think of herself as a beginner. “I had to let go of my ego. That was when I began to learn. Before that I was just fighting.”

Looking back, she now sees that period as being a refreshing experience and is very happy she made the decision to do it. “I was 30 years old and I had a long list of things I wanted to learn, so I thought, what would happen if I quite my job and dedicated myself to the things I wanted to do. It took me a year and a half to do it, because when you are settled you do ask yourself, ‘why should I change’, but I jumped into a completely different life and I’m happy that I did.”

Gaëlle Solal will begin Saturday’s program with Bach’s Partita No. 2. “It’s a monumental work and everyone will be waiting for the Chaconne, which has been part of my life for many years. I practiced it a lot as a student although I never played it for anyone. It was only in the past couple of years that I decided to play it in public. So I did, and then recorded it. Then I thought, why not play the entire partita? If you play the entire piece, you see how it is connected from the beginning to the end. I know that people will be making comparisons between how I play it and how others play it, but I’m ready for that because I just love the music so much.

From the first time Kevin Seddiki played the traditional Turkish folksong Drama KoÅNprüsü, she knew she also wanted to play it as well. “Kevin is a friend of mine. He’s a classically trained guitarist who also plays jazz and world music. He played it for me and I loved it, so I asked him for the score, but there was none — the music was all in his head. So I wrote it down, and of course it was a big mess. But we worked on it together and when I started playing it, many people asked where they could get the music, so I convinced him to have it published.”

The final section of her program is dedicated to music from Brazil. “I’ve tried to show the variety there is in Brazilian music. Gismonti is a little more avant-garde, Nazareth is more “classical” and Garôto is totally popular. It’s funny, because in Brazil you don’t refer to music as being popular or classical, the borders are not as defined there.”

Soon she began studying with a very good teacher at the conservatory. “He was very nice and an amazing human being. He was the one who made me love the instrument. Like any kid, I wanted to play everything fast, and he had a very good way of saying, that’s nice, now how about trying it slowly. I never thought I would be a professional, but my teacher was very clever. He never told me or my parents that I was gifted. Then, after I finished my diploma at 16 he said, ‘OK, Gaëlle has talent’. For me this was very healthy because I was never overexposed. I was able to just do my thing and enjoy it.”

The cimbalom was the feature of the show, an instrument capable of taking on many personas. Its performer, Chester Englander, has shaped his career around the instrument, and has inspired composers to write more repertoire for it, some of which was presented on the program. END_OF_DOCUMENT_TOKEN_TO_BE_REPLACED

You wouldn’t expect that acoustic from a glance at the nave, which is wide and long, but not especially lofty. But when I guest conducted a local amateur choir and professional orchestra in Beethoven’s Mass in C there a few years back, during the first rehearsal we released the final chord of the “Gloria” and listened in astonishment for the next several seconds. The sound continued to roll down the space like the big wave that surfers dream about. END_OF_DOCUMENT_TOKEN_TO_BE_REPLACED