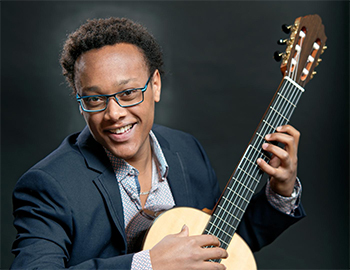 Concluding a week-long residency, 23-year-old French guitarist Raphaël Feuillâtre played the opening concert of the Cleveland Classical Guitar Society’s International Series on Saturday evening, October 5. His program of works by Paraguayan, Spanish, French, Cuban, Brazilian, and Russian composers — some written for the instrument, some transcribed — covered a broad range of styles and introduced one of the bright young lights of the guitar world to a good-sized audience in Plymouth Church.

Guitarists often fiddle with their stated repertoire, swapping out or changing the order of pieces in the printed program. Feuillâtre began by adding — without announcement — the “Preludio” from La Catedral to his opening set: Agustín Barrios Mangoré’s Valse and Mazurka Appassionata.

The absence of applause after the Mangoré pieces suggested that the audience was confused about what they were listening to, but Miguel Llobet’s Variations on a theme of Sor followed immediately and got everyone on the same page.

Feuillâtre brought wistfulness and an improvisatory feeling to the Mangoré set, and dazzled in the Llobet with his fluent, scampering scales and passagework. Although his soft playing became nearly inaudible at times, the guitarist has a charming way of drawing listeners to the edge of their seats.

In place of Leo Brouwer’s La Gran Sarabanda, Feuillâtre began the second half of his program with Alfonsina y el mar, a popular Argentine song by Ariel Ramírez arranged by one of the guitarist’s teachers, Roland Dyens.

Sérgio Assad’s Aquarelle or “water colors,” an impressionistic, three-movement work that explores a range of emotions, was written as a required competition piece for the Guitar Foundation of America. As intended, it puts the performer through a musical obstacle course from which Feuillâtre emerged triumphant.

Chatting with the audience and apologizing — unnecessarily — for his accent, Raphaël Feuillâtre grouped his final three pieces together: Villa-Lobos’ Prélude 5, a moody homage to social life, and arrangements by Antoine Fougeray of Scriabin’s Prélude pour la main gauche and Rachmaninoff’s very pianistic Prélude en Sol min. The guitarist dispatched them with éclat — using both hands for the Scriabin — and earned a big ovation. Bounding back onstage, he returned the favor with Roland Dyens’ ebullient Clown Down. 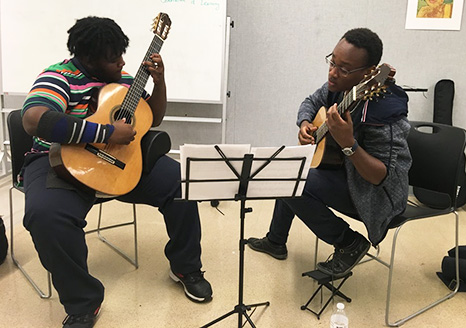 Among his educational outreach activities during the Cleveland residency, Raphaël Feuillâtre coached one of the Guitar Society’s flagship students, Damian Goggins, who opened for him on Saturday with a confident and stylish performance of José Luís Merlin’s “Joropo” from Suite del Recuerdo.

It might seem that there’s not a lot left to discover after three decades of experience with the Red Priest’s charming and evocative score, but this performance boasted a secret weapon: the young Spanish violinist Francisco Fullana, now the Orchestra’s artist-in-residence, whose affecting personality and easy virtuosity raised the solo part a quantum leap above the merely extraordinary. END_OF_DOCUMENT_TOKEN_TO_BE_REPLACED

END_OF_DOCUMENT_TOKEN_TO_BE_REPLACED

The Cleveland Orchestra’s second performance of the new season on Sunday afternoon, October 17 at the newly renamed Mandel Hall at Severance Music Center was just such an occasion. If the ensemble’s return to public concerts under the baton of Franz Welser-Möst wasn’t enough reason to light a bonfire, the Cleveland debut of a new work written for one of the Orchestra’s most popular soloists, and the swan song of one of its longest-serving members added extra fuel to the celebration. END_OF_DOCUMENT_TOKEN_TO_BE_REPLACED