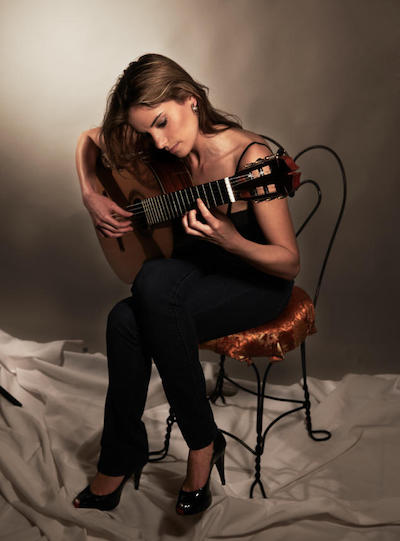 With some performances, you can just tell that the player has a special relationship to the piece. But do you really know? During a recent phone call with Croatian guitarist Ana Vidović, I tested that theory: having heard her play Francisco Tárrega’s Recuerdos de la Alhambra in a recording on YouTube, I asked her if there’s a reason it sounds so natural in her hands.

“Actually, it’s one of my favorite pieces,” she said. (Me: quiet fist pump.) “I’ve played it since I was very young — I love the melody. And no matter how many times I play it, it’s always interesting to me.”

On Saturday, October 20 at 7:30 pm, Vidović will return to Plymouth Church in Shaker Heights as part of the Cleveland Classical Guitar Society’s International Series, armed with a program that begins with Bach and ends with Piazzola. In between: pieces by Giuliani, Tárrega, Mongore, and Scarlatti. Tickets can be purchased here.

“I like to start concerts with Bach, and this is a beautiful piece as well,” Vidović said of the Flute Partita in a, BWV 1013. “The arrangement is actually by a Croatian cellist,  Valter Dešpalj. I usually play his arrangement — he’s done a fabulous job with all the Bach sonatas and partitas.”

The choice of three selections from Piazzolla’s Four Pieces is partly inspired by Vidović’s love of jazz and blues. “I listen to a lot of it, and I try to play a little bit,” she said. “It’s such a different style from classical. But I mean, I listen to everything — rock and roll, pop, and all kinds of music.” Vidović also noted that the piece is quite popular among guitarists. “And I’ve noticed that audiences respond really well to it.”

Our conversation also touched on Vidović’s family and her time growing up in Croatia. She has two older brothers, both now professional musicians as well: Viktor plays the guitar, Silvije the piano. And it was Viktor who originally taught her music.

“He’s the oldest child and was the first to play an instrument, so we all followed him. I kind of wanted to be like him, so that’s why I chose guitar. But it was just wonderful to have him as a guide from that early age. He taught me how to read music and the basics of the guitar — hand position and everything. So it was very valuable for me at the time, and I’m grateful to him for being such an inspiration to me.”

When Vidović was born, Croatia was a Socialist Republic, part of Yugoslavia. During the ‘90s, the country went through great turmoil to reach independence, including several years of war. How aware was Vidović of what was going on around her?

“I was about 11 years old when it all started,” she said. “It was a difficult time for everyone, but our parents were very supportive. We had to practice, go to music school, and go to regular school — they kind of occupied our minds so that we didn’t have a chance to think about all the bad stuff that was going on. Of course, I’ll still always remember that it was a tumultuous time. It’s very painful when it’s happening to your own country, so obviously that had an impact on me at that young age.”

Vidović came to the U.S. in 2001 to study at the Peabody Conservatory, which produced quite a culture shock. “It took me a while to get used to it. But I’ve been living here for many years, so I’m fully adjusted by now. Of course, I will always be Croatian, and I miss home very much, but I’m very happy that I moved here. It’s just a great experience to see another part of the world, and to be able to live and work here is a great privilege.”

Jackson began the program with a recitation of Langston Hughes’ poem “Helen Keller” — the first of five poems by Hughes that served as interludes between each piece on the first half. END_OF_DOCUMENT_TOKEN_TO_BE_REPLACED

Pianos with pins and tape on strings, a bass drum and tam tam, crotales, Almglocken, and vibes. Microphones were hooked up all around the instruments. The feed was sent to speakers around the room. Lighting designer Nicholas Houfek hung incandescent globes over the arrangement of instruments from thin black wires stretching across the beams. END_OF_DOCUMENT_TOKEN_TO_BE_REPLACED

From the podium, Elim Chan set an ambitious tone for the evening. The rising star conductor, here in her Cleveland Orchestra debut, has a commanding style, and every twist and turn in Saturday’s performance tracked closely with her baton. END_OF_DOCUMENT_TOKEN_TO_BE_REPLACED