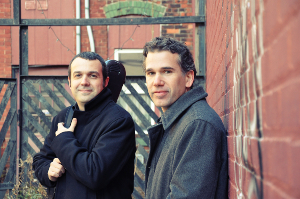 Benoît Albert: We saw those amazing creatures in the tank, and I looked at Randy and said, “Looks like us when we play music.” It was a joke at first, but it was also linked to the Assad Brothers. We thought it was more mysterious and engaging in French.

Randall Avers: It definitely has a silly side to it. Before that trip to Akron, I remember we were on this seven- or eight-hour trip to Chicago, and we were sitting there saying, ‘OK, we have to figure out what we’re called.’ We came up with all these different weird names, and we were just cracking up.

After we decided on The Jellyfish Brothers, the very next gig we were invited over to the Hunter Museum in Chattanooga, and they had an exhibit on jellyfish by Dale Chihuly, the glassblowing expert. So it was like — this is the perfect name for us, and we’re just going to run with it until we find something better.

RA: It’s been fun because in a sense, it’s broadened our ability to do lots of different things. We’ve been working with silent film productions over the years, and the “brothers” concept — the Frères Lumière were basically the first film experts — seems to have a long connection to different artistic media.

We haven’t been solely focused on classical guitar duo music. We’ve been incorporating different types of music, media, and situations that are a little more entertainment-based. So in a sense the name is perfect for us, and at the same time we’re trying to fit into it.

But 2008 was just the year Avers and Albert re-formed their duo. Their collaboration dates back to 1999, when they were students at the Paris Conservatory. There they were awarded the 1ère prix for chamber music, performing a program that included the premiere of a new work by Atanas Ourkouzounov. Not coincidentally, the duo will be premiering a new piece by Ourkouzounov titled Broken Grooves on their current tour.

Benoît Albert: We were in the same class with Atanas, a Bulgarian who is now very famous as a composer and guitar player. He influenced us a lot. When we were going to have to take the chamber music exam, we talked to Atanas and he said, “Oh, I have a brand-new piece. Do you want to premiere it for the exam?” We said, “Yes, let’s do it,” and we did. It’s an amazing contemporary piece based on folk music.

When we re-formed the duo in 2008, we wanted to achieve a better rhythm and groove. Because of meeting Ourkouzounov and because of our knowledge of Balkan music, we decided to go deeper into that.

Randall Avers: It was a cultural exchange in a lot of ways. Now Ourkouzounov loves playing Keith Jarrett and a lot of American music — he’s big into Chick Corea. I think we all affected each other with our influences and our backgrounds.

Also on Saturday’s program are Albert’s Trois Caprices and Avers’ Mekanisk Rhapsodie, as well as their free improvisation titled Noise. You can read more about the compositional backgrounds for Albert and Avers on the duo’s website.

Benoît Albert: For me, composing is kind of a door in my head that leads to that secret garden where I can really experiment and talk to myself through the music. In the 20th century there has been a huge separation between the composer, the player, and the improviser. I think it was completely different before that: musicians like Bach and Monteverdi were doing all three activities at the same time. I wouldn’t feel complete if I weren’t practicing each of those aspects.

Randall Avers: Feeling complete as a musician is a personal thing. It’s demanding just to be a top-notch player — you can devote your entire life and career to putting the notes in order and expressing yourself in performance.

Composition was a social animal for me from the beginning — the first piece I wrote was with another guitar player when I was at Oberlin. The classical guitar can be a lonely instrument, and these pieces had a social context around them. So what I remember is that it didn’t feel like composition, it felt like a dialogue, expressing music back and forth, and then compositions came out of that.

I also love improvisation. I think free dialogue deepens the relationship between us, and even if some of the improvisations don’t have the formal beauty of something composed, it always makes our playing more sympathetic, more free.

END_OF_DOCUMENT_TOKEN_TO_BE_REPLACED

The strings-only work by Berg has made relatively frequent appearances on the Orchestra’s programs. In 2021, the musicians recorded it for the In Focus series, and it appeared again on last year’s European tour. Friday’s rendition maintained the group’s characteristic light and effortless playing, each section blending as much as possible to echo the work’s original form as a string quartet. At fifteen minutes total, the piece is quite short, but the dense encoded musical meanings require some extra-attentive listening. Splitting up the three movements ensured that each one could be appreciated on its own. END_OF_DOCUMENT_TOKEN_TO_BE_REPLACED