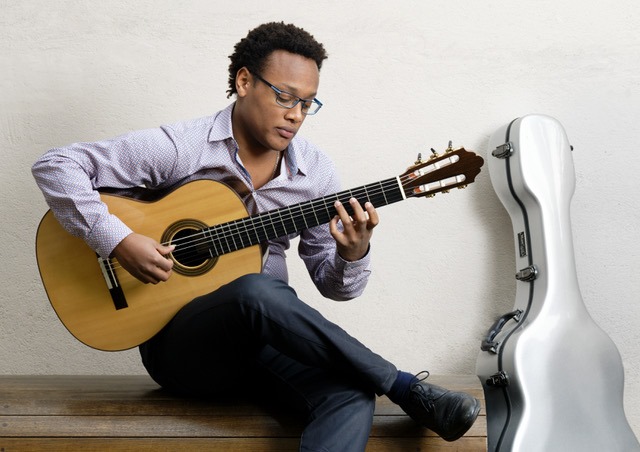 I reached the guitarist by email to talk about the last memories from his tour, coming out of lockdown and going back in, filming his concert, and choosing his program, which includes works by Bach, Weiss, Sérgio Assad, Villa-Lobos, Scriabin, Rachmaninoff, and Roland Dyens. (Click here to see the full list of repertoire, and here to RSVP and to receive the link to the concert.)

Jarrett Hoffman: What happened after your week off in Los Angeles?

Raphaël Feuillâtre: I gave two more concerts, and my last stop (non-performing) was Chicago. I took advantage of this time to visit Sérgio Assad, who kindly welcomed me at his home to work on his piece Aquarelle, which I’d been playing the whole tour. Then I had to wait a few long days, thinking of an eventual return home. But actually, when the GFA tour manager announced that I had to go back, I really had to do it as soon as possible.

JH: Over the past few months, you were able to give concerts and teach at festivals in person in France, but now the country is in another lockdown. That’s different from the U.S., where we’ve been in bad shape with the virus mostly continuously. Was it nice to have those normal experiences again, if only for a short time, or has it been difficult to go back and forth in what you’re able to do?

RF: Actually both — nice and difficult. Of course, after having worked hard during the first lockdown without knowing when I would be able to perform again, it has been an intense pleasure to go back onstage and to teach. But as I perform mostly outside of France, the situations of other countries affect my artistic activity anyway.

JH: What has been your experience with practicing when you have no scheduled performances?

RF: In a way it’s easier to work up pieces, but harder to reach a concert version, so I felt lucky to have had the GFA tour experience that helped me reach that goal.

JH: Let’s talk about the concert you’ll be giving online for the Cleveland Classical Guitar Society. First, will it be pre-recorded?

JH: Your program includes arrangements by some of your former teachers as well as your new colleague Antoine Fougeray at the CRR de Rueil-Malmaison, where you’ve just recently started teaching. What is it like to play these works that in some way originated from people in your own life?

RF: At the beginning it was more a choice of repertoire than of arranger, and then I found those arrangements to be better than others. I think that to make an arrangement, you need to understand the piece deeply, so it’s easier for me to play an arrangement by someone I really trust and with whom I can discuss it. For Antoine Fougeray’s arrangements, he is running a publishing house, so it’s also a way to help him develop his work, which I really appreciate for many reasons — the most important being that there is a form of integrity in it, making it a really good way to develop the guitar repertoire. Of course, I still have it in mind to do my own arrangements as well.

JH: Near the end of the program, you’ll play a set of three preludes by Villa-Lobos, Scriabin, and Rachmaninoff that you also included on your second album last year. What do you find compelling about that set?

RF: The pieces themselves are compelling actually, I just try not to make them sound the opposite, which requires some intense work and allows me to develop certain techniques.

JH: Dyens’ “Clown Down” from Triaela is a really fun way to end, with some very wild sounds. How would you describe what people will hear in that movement?

RF: Well, it’s hard to know what people hear exactly, but I would say Afro-Brazilian rhythms, tapping. And as the subtitle is “Gismonti at the circus,” I would say lions roaring and a lot of unusual things for classical guitarists that people could interpret as they wish.

Northeast Ohio’s Les Délices has long been that rarest of beasts: a world-class organization so proud of its region (ours) and repertoire (distinct niches in pre-1800 music) that it never tries to be everything to everyone, paradoxically making a strong case for a broad, curious international following. In the December episode of its SalonEra series, the ensemble embraces its strengths and community to marvelous effect. END_OF_DOCUMENT_TOKEN_TO_BE_REPLACED

END_OF_DOCUMENT_TOKEN_TO_BE_REPLACED

Another I remember fondly is Gian Carlo Menotti’s Amahl and the Night Visitors.  Commissioned by NBC, the one act, made-for-television opera, premiered on December 24, 1951, at the network’s studios in New York’s Rockefeller Center. And now, through the wonders of technology, Cleveland Opera Theater has created a magical new production of the work which is available on demand through January 6, 2021 (Three Kings Day). END_OF_DOCUMENT_TOKEN_TO_BE_REPLACED

Jessen has now followed up with her second solo CD, Winter Chapel. Recorded on January 17, 2020 in Oberlin College’s Fairchild Chapel and available on Carrier Records, the album is a continuum in Jessen’s journey to push the musical boundaries of her instrument and herself as an improviser. END_OF_DOCUMENT_TOKEN_TO_BE_REPLACED