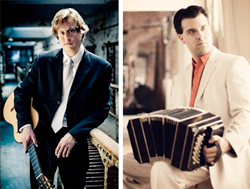 On Sunday, June 1st at 7:30 pm, Jason Vieaux, guitar, and Julien Labro, bandoneón, will close out the 2014 Cleveland International Classical Guitar Festival with a dynamic recital at Cleveland Institute of Music’s Mixon Hall.

Vieaux and Labro, who have been collaborating for the past four years, will perform a varied program consisting of works by Brouwer, Gnatalli, Metheny and Piazzolla. In a recent conversation, Vieaux, who is the head of the CIM guitar department, described the formation of their musical duo. Vieaux, who describes himself as a jazz enthusiast, heard Labro playing accordion with his group Hot Club of Detroit four years ago at Cleveland’s Nighttown.

Vieaux said that the group did not intend to transport the audience back to the 1930’s, but instead “used instrumentation as a springboard for new ideas.” Both Vieaux and the crowd were “knocked out” by Labro’s solo playing. Vieaux and Labro chatted after the performance and discovered that they were “fans of a lot of the same kind of music.”

Vieaux told Labro about his interest in the bandoneón, a concertina-style accordion used in Argentine tango ensembles. Within two years, Vieaux had designed a concert program for Cleveland for himself, Labro and a string quartet that featured the Piazzolla double concerto among other works. “That really got the ball rolling,” said Vieaux.

Vieaux and Labro aim for audiences to appreciate the ensemble “purely for the sound of it and its wide range of programming.” Vieaux noted that “sonically, the combination of the two instruments is something that doesn’t get explored often. There are bandoneón duos that are popping up around Europe, but ours is a little different. We’re not necessarily trying to create a tango band.” Vieaux explained that the duo uses Latin American rhythms, both in their traditional form or “filtered through classical composers.” The duo is eclectic in the sense that they can “explore a lot of range” due to the “polyphonic” quality of the bandoneón.

Vieaux shed light on this by commenting further about the June 1 concert program. “Leo Brouwer’s Tres Danzas Concertante are originally for guitar and a small chamber orchestra,” he said. “Julien took the piano reduction and plays that on the accordion.” Radamés Gnatalli’s Pixinguinha, Ernesto Nazareth, Anacleto de Medeiros and Chiquinha Gonzaga from Suite Retratos are “Brazilian choro pieces that were originally for two guitars.”

“We’re not necessarily even trying to evoke something from the past. We’re really into the sound of the two instruments together,” said Vieaux. “Not just the two different sounds, but the way that he and I play together and play off of each other.”

Vieaux, who was present for the debut of the original Cleveland International Classical Guitar Festival in 2001, said that it “was an incredible gift of Armin Kelly [the festival’s artistic director] to insist that if at all possible it should be located at CIM to act as a draw for students and aficionados to its guitar department.” Vieaux performs in the festival each year and aims to “bring new collaborations to it whenever possible.”