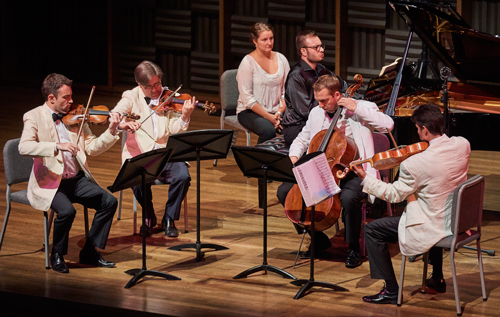 How do you tell a great chamber music performance from an ordinary one? That’s what the jury and audience are asking themselves this week as the Cleveland International Piano Competition puts its four finalists through a chamber music round with the Escher String Quartet.

It’s easy to tell when a solo pianist is having a good or an off night. When there are five musicians onstage, the task becomes more complicated. At the very least, is everybody playing together and (exception made for the pianist) in tune? Beyond that, is there a palpable feeling of camaraderie or chemistry among the players?

Are they skimming along the surface of a piece, or digging deep into its musical DNA to bring hidden details to light? Are they being true to the character of the composer in their playing? If so, are they bringing any original insights to bear on their interpretation?

Tuesday’s round brought two competitors to the Gartner Auditorium stage who listed extensive chamber music experience in their bios. Georgy Tchaidze joined the Escher Quartet in Antonín Dvořák’s Piano Quintet No 2 in A, Op. 81, followed by Nikita Mndoyants with Johannes Brahms’s Piano Quintet in f, Op. 34.

On Wednesday, the jury and audience heard Leonardo Colafelice and Dinara Klinton, who present themselves in their biographical materials more as recitalists and concerto soloists. Having heard their solo work in preliminary rounds, it was fascinating to experience their playing in a chamber music situation with the Escher Quartet (violinists Aaron Boyd and Pierre Lapointe, violist Adam Barnett-Hart, and cellist Brook Speltz). 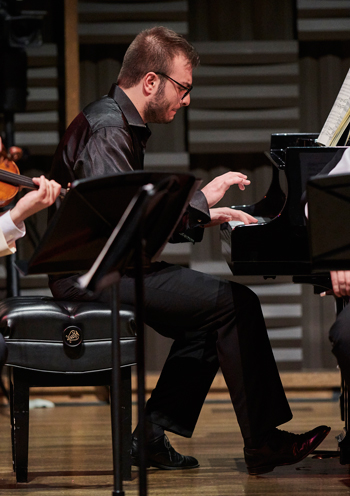 Colafelice chose Robert Schumann’s Piano Quintet, a piece that almost single-handedly established a new genre in chamber music, a work whose piano part Felix Mendelssohn described as “fiendish” when he stepped in to play its premiere for the ailing Clara Schumann, and a quintet whose color palette is nearly symphonic in scale.

The ensemble began the piece gently, leaving room for Schumann’s music — and those striking opening chords that double-time halfway through the phrase — to expand and grow. Colafelice benched his strikingly powerful touch in favor Schumannian poetry, nicely matching the color of the strings. More intensely focused than relaxed, he kept on top of the work’s considerable technical demands. 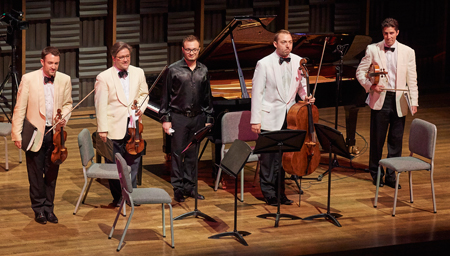 While ensemble was strong throughout the piece, things got a bit messy in the fast part of the second movement funeral march, and even a bit frantic in the third, where the scherzo threatened once or twice to spin out of control. After some jostling over tempo, the double fugue of the last movement settled into a grand conclusion. 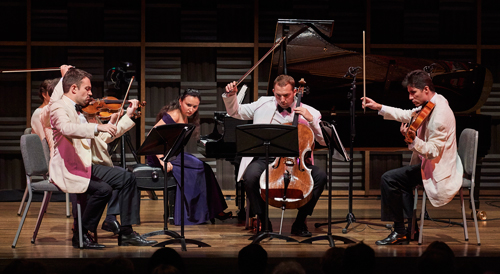 Dinara Klinton chose Johannes Brahms’s Quintet in f, Op. 34, which had also appeared on the previous evening’s agenda, but her approach to the work was gentler, more transparent, and not so powerfully surging.  Her Escher Quartet colleagues flexibly subscribed to a whole different view of the piece.

Klinton sounded completely at home in Brahms’s sound world in the first movement, and she contributed to nicely-constructed sequential climaxes in the second. She established a festive but not overly-grand feeling in the third, and though the finale began rather cautiously, she helped it bloom into an agreeable fullness later on. 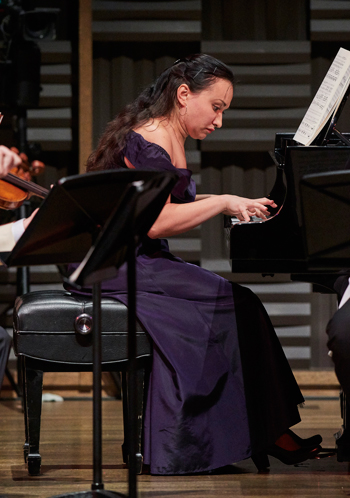 In a few passages, Klinton showed her pianistic heft, but she stayed closely in touch with the strings in matters of balance and ensemble. Brahms gave her some challenges, but she met all of them gracefully.

In the end, both performances hinted at the challenges of having to rehearse and perform major works in a single day. The notes were there and the pianists played them with fluent confidence, but interpretations only went so far into the secrets of the music. Over the two evenings, the Escher Quartet did exactly what they should have by matching each pianist’s approach, coloring their contributions accordingly. 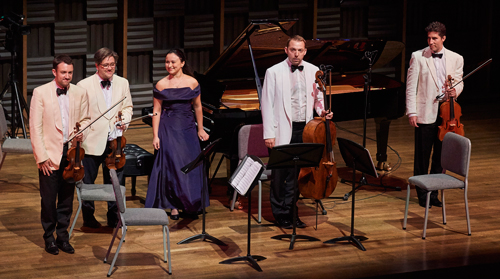 Next stop: concertos with The Cleveland Orchestra on Friday and Saturday evenings, an ensemble famous for playing like a huge chamber music group. This initial stage of the final round must be a good warmup for that experience.

Finally, a bow to CIPC stage manager Emily Grabinski, who also served as page turner for the contestants. She must have had telescopic vision: seated well behind the pianists so as not to block an upstage camera, she did a flawless job of keeping an eye on the music and springing up just in time to flip pages.