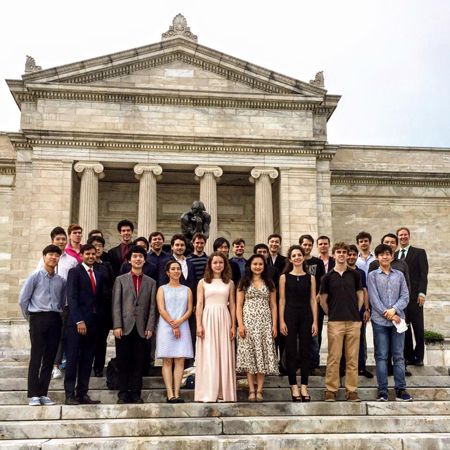 The opening sessions of the Cleveland International Piano Competition’s first round proved to be a thrilling start on Monday, July 25 at the Cleveland Museum of Art’s Gartner Auditorium. Eleven fine contestants showcased their virtuosity and poesy before eight jurors — all of whom are renowned pianists in their own right.

An introduction by CIPC president and CEO Pierre van der Westhuizen explained that throughout the first and second rounds, each contestant’s performance must include a Baroque work, a Classical sonata, a Chopin étude, a composition written after 1950, and a piece by either Brahms, Chopin, or Schumann.

Japan’s Yuta Yano, 24, began with a spirited reading of Mozart’s Sonata No. 9 in D. His performance of Chopin Étude No. 7, Op. 10 swelled and surged nicely, and he brilliantly captured the mysticism of Scriabin’s fifth sonata, Op. 53.

Russia’s Ilya Kondratiev, 27, showed off his clarity and technical skill with two Scarlatti sonatas, K. 466 and 141. His voice really came through in his riveting interpretation of Beethoven’s eighteenth sonata in E-flat, which was quite a treat.

China’s Ruoyu Huang, also 27, opened with an exaggeratedly dynamic performance of Haydn’s Sonata in C Major, Hob. XVI: 50, whose tempo waxed and waned in Romantic fashion. His Chopin Étude No. 8, Op. 10 was beautiful, and he gave a thought-provoking performance of the first twelve Chopin Preludes, Op. 28.

Poland’s Łukasz Krupiński, 24, delivered a charming rendition of Bach’s Prelude and Fugue in b-flat from the first book of The Well-Tempered Clavier. Following an articulate Chopin Étude No. 11, Op. 10, Krupiński excelled in two rousing Scriabin works — the Étude No. 5, Op. 42 and Sonata No. 2.

China’s Yunqing Zhou, 27, performed all three of his diverse works impressively. His Haydn Sonata in E-flat, Hob. XVI: 49 was full of humour and pristinely nuanced character, while his Chopin Étude No. 5, Op. 25 culminated intensely. The selections from Ligeti’s Musica Ricercata couldn’t have provided a more delightful finish.

Wrapping up this session was China’s Shen Lu, 30, who carried a clear, lovely tone throughout his performance of Beethoven’s second sonata, Op. 2. Though he sped through Chopin’s Étude No. 10, Op. 10, his enchanting reading of Arno Babajanian’s Poem did this sadly neglected work a tremendous amount of justice.

Georgia’s Luka Okros, 25, began the second session with Scarlatti’s K. 213 sonata, achieving an excellent balance between passion and refinement. His boundless energy in Beethoven’s Waldstein Sonata resulted in a truly captivating performance of this masterwork.

USA’s Alexei Tartakovsky, 27, gave crisp and colorful readings of three Scarlatti sonatas: K. 491, 466, and 141. After his lovely Chopin Étude No. 6, Op. 25 and Menotti’s Ricercare and Toccata, his interpretation of the third Chopin scherzo proved to be intense, if rather pounding.

Russia’s Georgy Tchaidze, 28, brought out the eloquent side of Scarlatti’s K. 77 sonata and captured the child-like innocence of Pärt’s Variations for the Healing of Arinushka. His forceful reading of Chopin’s “Revolutionary” étude complemented the thrilling Romanticism he displayed in Brahms’ Two Rhapsodies, Op. 79.

Russia’s Nikita Mndoyants, 27, played Haydn’s Sonata in E, Hob. XVI: 31 with refined dignity, bringing the music to life. The fugal sections of his Bach Toccata in f-sharp were exhilarating, and he finished with a breathtaking rendition of his own Variations on a Theme by Paganini.

So far, the level of competition is towering at the 2016 Cleveland International Piano Competition. The jury has some tough decisions ahead of them indeed — and to think it’s only round one!

END_OF_DOCUMENT_TOKEN_TO_BE_REPLACED

The strings-only work by Berg has made relatively frequent appearances on the Orchestra’s programs. In 2021, the musicians recorded it for the In Focus series, and it appeared again on last year’s European tour. Friday’s rendition maintained the group’s characteristic light and effortless playing, each section blending as much as possible to echo the work’s original form as a string quartet. At fifteen minutes total, the piece is quite short, but the dense encoded musical meanings require some extra-attentive listening. Splitting up the three movements ensured that each one could be appreciated on its own. END_OF_DOCUMENT_TOKEN_TO_BE_REPLACED