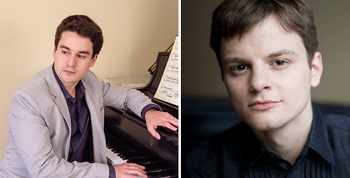 When the names of the eight semi-finalists were announced on Saturday evening shortly after 7:00 pm, four pianists had the daunting pressure of putting the final polishing on their 60-minute recital programs and performing less than 24 hours later. On Sunday, July 31 the Cleveland Museum of Art’s Gartner Auditorium played host to the first two of four semi-final sessions.

Alexei Tartakovsky (27, United States, above left) began the 10:00 am session with Ravel’s Miroirs, highlighted by his charming, darkly-hued take on the opening “Noctuelles.” While the final movement, “La vallée des cloches,” was lovely, his reading of “Alborada del gracioso” sounded rushed and technically insecure. Tartakovsky continued his program with the Transcendental Etude, S. 139, No. 12 (“Chasse-Neige”) by Liszt. Although his playing was well-paced, it never really took flight. The louder sections often became blurry and a few nicked notes crept in here and there. During Rachmaninoff’s Sonata No. 2 in b-flat, Op. 36 (1913 version), which closed the program, Tartakovsky showed off his technical prowess, producing a huge sound.

Playing with a rich, velvety tone, fluid technique, and an abundance of musical ideas, Georgy Tchaidze (28, Russia, above right) brought his “A” game to the Gartner Auditorium stage. His performance of Schumann’s Waldszenen, Op. 82 was engrossing from start to finish, perfectly capturing the essence of each of the work’s nine short movements. No. 4, “Haunted Place,” was beautifully voiced, and No. 8, “Hunting Song,” was a grand gallop, while No. 9, “Farewell,” sounded like a sweet conversation between two lovers parting.

Following a full-bodied performance of Scriabin’s brooding Vers la Flamme, Op. 72, Tchaidze launched into a spectacular rendition of Mussorgsky’s Pictures at an Exhibition. Never have I heard a more magical performance of the piece: he brought each of the scenes vividly to life. The gnome was dark and spooky, the children playful, and the oxen pulled the heavy cart in grand fashion. Tchaidze brought crystalline lines to “The Ballet of Unhatched Chicks in their Shells,” and Goldenberg and Schmuÿle stepped out of their frame to argue. The wonderfully explosive “Hut on Fowl’s Legs” segued into a majestic playing of “The Great Gate of Kiev.” This was a performance to remember, and the audience acknowledged the pianist with an immediate ovation.

Jackson began the program with a recitation of Langston Hughes’ poem “Helen Keller” — the first of five poems by Hughes that served as interludes between each piece on the first half. END_OF_DOCUMENT_TOKEN_TO_BE_REPLACED

Pianos with pins and tape on strings, a bass drum and tam tam, crotales, Almglocken, and vibes. Microphones were hooked up all around the instruments. The feed was sent to speakers around the room. Lighting designer Nicholas Houfek hung incandescent globes over the arrangement of instruments from thin black wires stretching across the beams. END_OF_DOCUMENT_TOKEN_TO_BE_REPLACED

From the podium, Elim Chan set an ambitious tone for the evening. The rising star conductor, here in her Cleveland Orchestra debut, has a commanding style, and every twist and turn in Saturday’s performance tracked closely with her baton. END_OF_DOCUMENT_TOKEN_TO_BE_REPLACED