Since its inception in 2008, the Cleveland Foundation’s Creative Fusion program has brought more than 80 international artists to Cleveland for residencies. For the program’s latest edition, the Cleveland Museum of Art (CMA) is partnering with the Foundation in the commissioning of six new works by composers from across the globe under the auspices of the Museum’s Performing Arts Series.

On Wednesday, May 8 at 7:30 pm in the Museum’s Ames Family Atrium, composer Cenk Ergün will present Formare, the second premiere of the series. The work is scored for female choir, children’s choir, harpsichords, and trombones. The hour-long concert is free.

Responding to questions by email, Ergün said that the work’s title, Formare, means “to form” in Latin, and refers both to the formation of sound, and to the positioning of the performers within the space. Ergün will use both the ground level and second-floor allées of the atrium.

“The four trombones are divided into pairs and placed on the west and east allées,” Ergün said. “Four of the twelve singers are spread across the north allée, and the other eight, along with three harpsichords and a children’s choir, are positioned evenly across the ground floor. This formation is designed to create discrete duets, trios, and quartets across the atrium, revealing a different façade of sound depending on one’s listening position.”

The composer noted that listeners can opt to attend the performance without interruption, or wander in and out. “The center of the atrium will provide the most balanced listening — perhaps it is the ideal spot to experience the music if you are planning to remain stationary throughout the duration of the performance. However, if you are after a more self-curated, adventurous experience, please move about the entire space: take an escalator and stand right next to a trombonist, or walk to the north allée and plant yourself next to a singer to get a bird’s-eye view of the environment. Don’t worry, the performers will be expecting these close encounters with the audience.”

When Ergün made his first visit to the Museum in 2016, he said he was “struck by the contrast between the intimate, close-up experience of viewing the pieces in the museum’s collection, and that of stepping out into the vast, empty space of the Ames Family Atrium.” 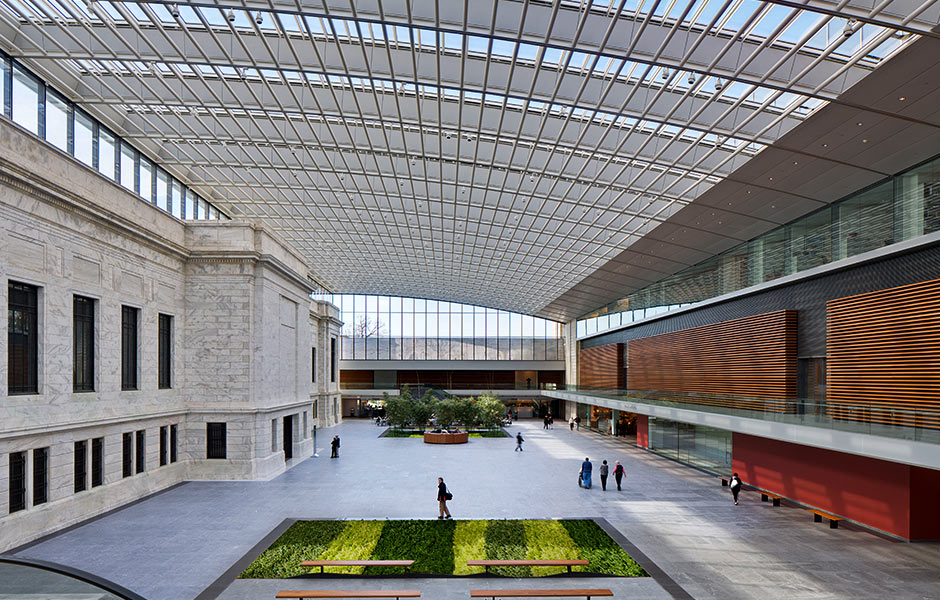 The composer’s latest visit occurred during the fall of 2018. I asked him what he did during that trip?

Cenk Ergün: During that visit I was able to test some initial ideas I had for the work. I often use alternate tuning systems (microtonality) in my music. Most classical musicians are trained only to think in the Equal Tempered system, i.e. the standard tuning of the piano.

In order to accommodate the exact tuning of the pitches I needed, I created mp3 recordings of the notes to be played back to each musician through headphones. The mp3s tell musicians not only which pitch to produce, but also when to produce it, solving the problem of synchronization while performing in a vast space without a conductor.

I tested this system with four singers and two trombonists and was very happy when it worked well.

The rest of our work together involved experimenting with dynamics and the placement of the musicians around the atrium. What happens when a singer sings a long pianissimo tone 50 feet away from you? What if she sings the same note through a megaphone, etc.

Mike Telin: What did you discover about the Ames Family Atrium?

CE: Before rehearsing with the musicians, I spent three hours in the atrium just observing, taking in the acoustic, the architecture, and people’s movement within the space.

Unlike most enclosed structures of this size, I found that it wasn’t too reverberant. Despite its vast scale, there is an intimacy about the place. Focusing on how sounds behaved within it, I realized that I could hear — though not understand — quiet conversations happening in the most distant corners of the atrium. This gave me confidence that I could place acoustic instruments all around the space, and create a delicate sound environment without the need for amplification.

MT: How did you decide on the instrumentation?

CE: That is a priority for me, and once it’s decided on, I feel the piece is halfway finished. In addition to microtonality, most of my music also features long tones. I knew I wanted to work with the voice and the trombone since these instruments are great at producing long tones tuned to any frequency. Trombones also have the ability to be incredibly loud, and I realized I could fill the whole space with just four of them.

After the initial rehearsal I knew that I needed more than four voices, and settled on twelve. But four of the singers also use megaphones during different moments in the piece, to level the playing field with the trombones, as well as to introduce an additional color into the mix.

For this premiere, I’ve been working with the Cleveland Chamber Choir and their director Scott MacPherson, and they have been excellent. While researching singers and choirs in the area, I also came across the Cleveland Institute of Music Children’s Choir. I thought a children’s choir would be perfect for the intimate, delicate sound world I was after. We contacted their conductor, Jennifer Call, who was present at the initial rehearsal. Ms. Call and I immediately hit it off and she has been great to work with.

After the rehearsal, Tom Welsh, CMA’s director of performing arts, mentioned that the alternate tuning he heard in the music reminded him of early music, and casually asked if I wanted to see the museum’s harpsichord collection. When he showed me the room where seven harpsichords were stored I felt like a kid at a candy store. I immediately decided to include three of them in the instrumentation. Once I started composing, they quickly became crucial to the work; they add a contrasting sparkle to the sound texture, and now I can’t imagine this music without them.

MT: Is there a text for the vocal parts?

CE: I generally stay away from text in my works due to my desire to establish an abstract sound world devoid of narrative. The singers in Formare mostly use “aaa,” sometimes “nnn” for a more muted color, and “da-da-da” for repeated notes.

MT: How did you select the musicians?

CE: Scott MacPherson and Tom Welsh have worked together numerous times before, so he was the first person we approached when looking for singers. He was on board with the project right off the bat and the singers in his group have been excellent to work with. Jennifer Call and the CIM Children’s Choir was a lucky discovery as I mentioned before.

The trombone quartet consists of Lee Allen, the trombone professor at Oberlin Conservatory, and his current and former students Zoe Cutler, Katie Lambert, and Evelyn Proffit. Oberlin is an obvious go-to place when looking for excellent musicians, but initially my longtime friend, the legendary trombonist Abbie Conant, recommended I get in touch with them. Tom Welsh also works often with the wonderful harpsichordist Peter Bennett, who will be performing alongside his two students QinYin Tan and Michael Quinn.

MT: Is the score notated or are there some improvisatory aspects?

CE: The pitches are precisely notated. There are some long tones that the singers and the trombonists will be sustaining for several minutes. During these, how often and how long they pause to breathe is up to them. There are also some melodic fragments, of which the rhythmic interpretation will be slightly loose. Each performer is asked to act as a soloist without worrying about split-second synchronization with others.

MT: Is there anything more you would like to add?

CE: It’s been a privilege to get to know the Cleveland Museum of Art intimately and to be given complete artistic freedom, as well as the resources to realize the music I wanted to bring here. It’s been amazing to work with the museum staff as well as the wonderful musicians I mentioned above, and I am excited to share it with the audience. As I said before, two types of experiences are possible during the hour-long concert: listeners can sit or lie down and meditate, or grab a drink and walk around, treating the performance like a scavenger hunt for sound.

Jackson began the program with a recitation of Langston Hughes’ poem “Helen Keller” — the first of five poems by Hughes that served as interludes between each piece on the first half. END_OF_DOCUMENT_TOKEN_TO_BE_REPLACED

Pianos with pins and tape on strings, a bass drum and tam tam, crotales, Almglocken, and vibes. Microphones were hooked up all around the instruments. The feed was sent to speakers around the room. Lighting designer Nicholas Houfek hung incandescent globes over the arrangement of instruments from thin black wires stretching across the beams. END_OF_DOCUMENT_TOKEN_TO_BE_REPLACED

From the podium, Elim Chan set an ambitious tone for the evening. The rising star conductor, here in her Cleveland Orchestra debut, has a commanding style, and every twist and turn in Saturday’s performance tracked closely with her baton. END_OF_DOCUMENT_TOKEN_TO_BE_REPLACED