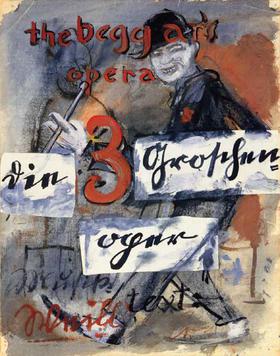 “It’s a relevant, exciting piece that hasn’t been done here for a long time, and this is going to be a special version,” said Skiba, who also serves as director of opera studies at BW. “Sometimes the word ‘opera’ scares people, but this will feel more like musical theater. It’s outrageous and vibrant.”

As in the Brechtian tradition of Epic Theater, Skiba said, “The goal is to create an encounter for the audience in which they’re aware that they’re watching something. We’re almost holding their faces to the fire. We’ve been telling the ensemble to look at them and make them feel judged, make them feel uncomfortable.”

The work is charged with political themes, but Skiba has eschewed supporting any particular cause. “Our audience and our cast are diverse, and we’ve got people with all different opinions,” he said, “but you can be of many different persuasions and find an angle in this. You’ll find something that upsets you, something that makes you laugh, and something to celebrate. There’s a Roman-Polanski-meets-Mel-Brooks feel to it.” 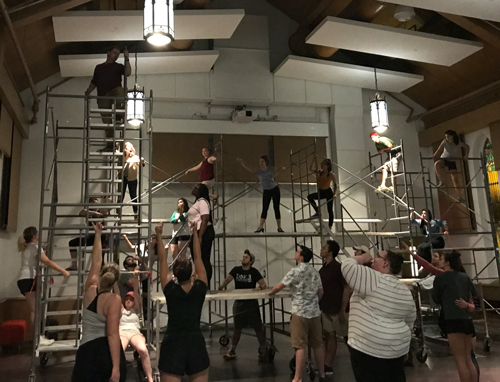 Skiba described the set as a series of scaffolding towers, some fixed and some rolling to link up in different configurations. “There’s a lot of climbing involved. I’ve worked with it before, and I only half-jokingly say I want to direct everything on scaffolding. It gives you an x-y coordinate to think about that’s unique — you don’t often have to think, ‘I’m now traveling up sixteen feet and am going to traverse the outside of the scaffolding and come down through this window.’ I think that helps highlight the physical, animal nature of the work.”

The cast includes a couple of professionals — local lyric soprano Laura Pedersen as the Street Singer, and BW Voice Faculty Chair Marc Weagraff as Sheriff Tiger Brown — alongside students from the BW Voice and Opera, Theater, and Music Theater programs.

“This piece straddles musical genres,” Skiba said. “We have the straight-up coloratura soprano throwing off high C’s and vocal pyrotechnics, but there’s also belting, straight tone, breathy singing, off-the-voice singing, and everywhere in between.” He added that versatility is an important element of the BW’s Voice and Opera program. “Opera singers have to be able to do crossover, be text-driven, and not just stand there like technique on a stick but actually use the voice and body to communicate. Educationally this piece is great for that because there’s nowhere to hide.”

The production will be miked, though Skiba called it a balancing act. “We don’t want anyone to come away thinking, ‘Wow that was miked,’ but we want every bit of text to be understandable. There’s a different way you can deliver text in dialogue and in singing when you’re miked, which will allow the different styles to come through. For the more classical, full-throated singing, the engineer will make adjustments on the soundboard, and when it needs to tip toward the jazz influence, we can dip right back into that as well. It’ll be a cool effect and really honor the flavor of the work.”

The Pittsburgh native said that many performances err on the side of casting either actors or traditional opera singers, “rather than singing actors going for it with reckless abandon. We were able to handpick people in the program and in the community, and in terms of vocalism and musicianship, this is going to be the best-sounding Threepenny I’ve heard.” 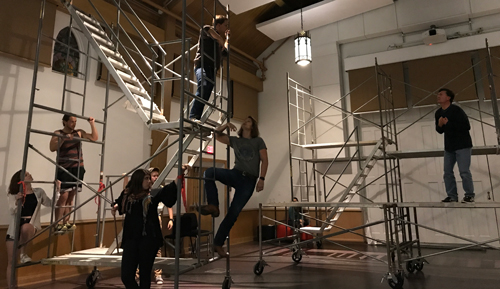 Skiba praised the open-minded approach of the students — as well as the more seasoned singers — in bringing an adventurous spirit to the production. “To his credit, Dr. Marc Weagraff scampered right up the scaffolding, straddled the top of a 20-foot tower, and hooked his legs and arms out like riding a roller coaster, tearing into the duet.”

Finally, Skiba made a point to note that while most Cleveland Opera Theater productions are family-friendly, this one isn’t, thanks to mature language and themes. “Parents can make their own decisions, but if this were a movie it would probably be rated R.”

Although the turbulent marriage of F. Scott and Zelda Fitzgerald —  self-caricatures of the Jazz Age — has inspired a number of literary efforts in addition to their own near-autobiographical novels, the subject never seems to have been approached through the lens of opera. Composer Evan Mack and librettist Joshua McGuire have stepped in to fill that void with their one-act The Ghosts of Gatsby, commissioned by Samford University (Montgomery, Alabama), where it premiered in November 2018. END_OF_DOCUMENT_TOKEN_TO_BE_REPLACED

While many American orchestras were just beginning to stir again after the holidays, Franz Welser-Möst and the Clevelanders were busy pulling off one of the most impressive programs in recent memory. A neglected Dvořák symphony, a darkish Mozart piano concerto featuring Yefim Bronfman, and a standout among Janáček’s few orchestral works served up sequential delights on Friday, January 10. END_OF_DOCUMENT_TOKEN_TO_BE_REPLACED