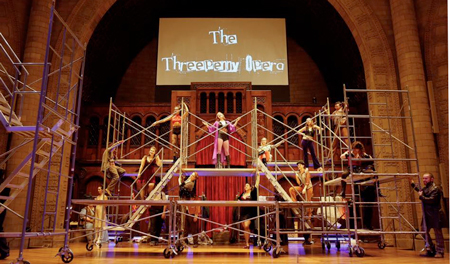 Cleveland Opera Theater got top billing, but students from the Baldwin Wallace Conservatory covered most of the singing and acting duties in Brecht & Weill’s The Threepenny Opera, which received its second and final performance at the Maltz Performing Arts Center in University Circle on Sunday afternoon, October 29. Directed by Scott Skiba, the joint production was supported by a seven-piece instrumental ensemble conducted by Domenico Boyagian.

Threepenny was hastily assembled by Bertolt Brecht and Kurt Weill in Berlin in 1928, drawing heavily on John Gay’s 1728 The Beggar’s Opera. That “ballad opera” satirized the conventions of Italian opera in Handel’s time, and turned the world on its ear by elevating notorious criminals to star status.

Brecht and Weill set their Weimar period production in Victorian London. Skiba changed the venue to New York in the 1970s and made use of an English libretto by Michael Feingold. Soho — a neighborhood in both cities — remained the scene of the crimes, though the beggars and whores of Manhattan centered their nefarious activities around an inauguration parade.

The cast was strong both in acting and singing prowess. Jake Dufresne made a commanding J.J. Peachum, the head of the beggars, and Nan Golz and Sabina Balsamo turned in vivid performances as Mrs. Peachum and their daughter Polly. Though preppy in his looks and bearing, Ethan Burck was vocally splendid as Macheath — Mack The Knife — and Elizabeth Rosenberg fully inhabited her role as Jenny Diver, Mack’s mistress. Chad Castilla was fawningly humorous as Filch. 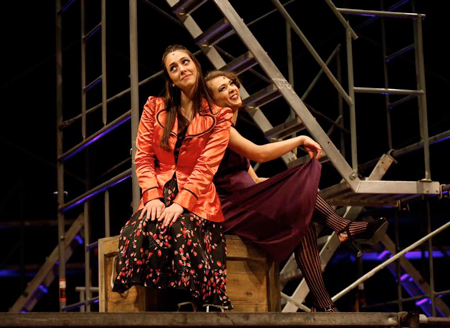 Dawna Warren was radiant in the role of Lucy Brown, and her scene and duet with Balsamo late in the show was a high point of the afternoon. “Loudspeaker” Olivia Billings appeared frequently to set up scenes. Two professionals — Laura Pedersen in a cameo role as the Ballad Singer, and BW faculty baritone Marc Weagraff, who played the police chief Tiger Brown — added gravity to the otherwise undergraduate cast. 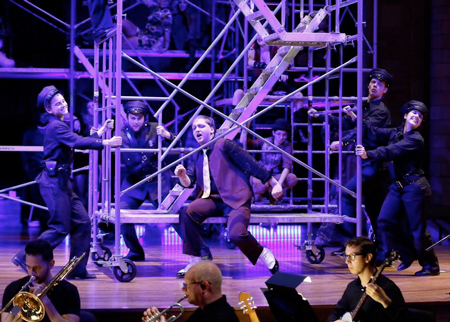 Skiba staged the show using multiple stacks of metal scaffolding, a kind of jungle gym that “provides a theatrical background on which the characters’ inner children can be brought forth,” as he wrote in his director’s notes. Good thing this was a young and athletic cast who were willing and able to spend most of the show climbing up and down and hanging off the rigging like human gargoyles or pole dancers. For scene changes, the actor/singers sprang into action and rearranged the scaffolding — frequently and noisily, an activity that eventually wore thin.

Skiba deployed his performers skillfully. A slo-mo scene in the penitentiary involving beggars and cops was hilarious, as was the “Deux ex machina” finale where Mack is spared from the gallows by Tiger Brown, riding in on a horse that might have been nicked from a carousel. 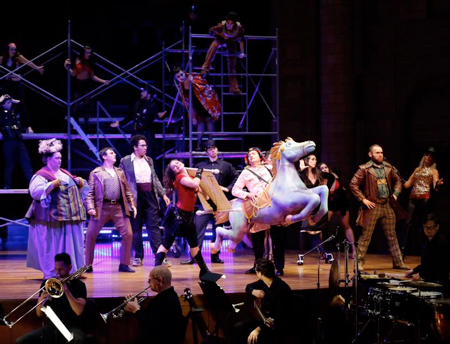 As an anti-opera, Threepenny is an odd title for a real opera company to take on in the first place, and it depends on a certain amount of pointed social commentary beyond some spicy language to bring it off. Although there’s always enough corruption and hypocrisy in society to warrant revivals of such a piece, this joint production didn’t quite hit the bull’s eye for relevance in 2017. Perhaps it was just that the audience missed hearing a lot of the dialogue. Though the principals were miked, words were hard to understand. Supertitles — in addition to the projected scene titles — would have helped.

And Threepenny Opera is long! At three and a half hours, the glacial unfolding of the plot and the lack of any really memorable music other than “Mack the Knife” brings on a tedium that demands cuts in the material. But bouquets to the BW performers — many of them freshmen — who demonstrated great breadth and depth of talent in this admirable, student production.

The music isn’t easy to play, either. Over the course of two hours, all of the musicians brought fantastic focus to the unrelenting tricky rhythms and countless layers of parts, all of which require a high level of individual responsibility. Even in the moments of calm, the accompaniment remains perpetually unsettled. Adams — who made a sprightly presence on the podium — combines minimalist, repeating motives in gradual layers, which eventually become so dense they overwhelm the senses. Lisa Wong deserves special mention for her thorough preparation of the Cleveland Orchestra Chorus, as does Jennifer Rozsa for the Children’s Chorus, which made a brief but memorable appearance in the last few minutes. END_OF_DOCUMENT_TOKEN_TO_BE_REPLACED

Warner was a fitting choice not just symbolically, but also sonically. The combination of Baroque strings, theorbo, harpsichord, and organ created a nice blend and balance, allowing the opportunity for softer instruments to stand out. In Johann Rosenmüller’s Sonata à 5 in g, Doug Balliett’s violone pizzicatos resonated beautifully, and in Johann Heinrich Schmelzer’s Sonata in d, harpsichordist Elliot Figg became an equal player in the texture with his clever improvisations. The slight exception was Joshua Stauffer on theorbo — despite the instrument’s big physical presence on stage, he received little time in the spotlight. END_OF_DOCUMENT_TOKEN_TO_BE_REPLACED