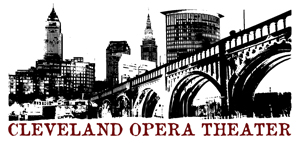 Opera Per Tutti, founded in 2006, announced last Friday that they were “rebranding” themselves as Cleveland Opera Theater. In a brief press release the company stated that:

Cleveland Opera Theater will continue to enrich the cultural life in Cleveland and Northeast Ohio by performing professional opera theater that is accessible, affordable and exciting, featuring professional artists who make Northeast Ohio their home, and offering exceptional education and outreach programming throughout the region.

We believe our new name will enhance our visibility in the community and allow for more dynamic partnerships with other Northeast Ohio organizations.  Please join us in celebrating our new name as we look to a bright future of Opera in Cleveland!

The first production presented under the company’s new name will take place this weekend, with two free performances of the holiday classic one-act opera, Amahl and the Night Visitors. Performances will take place on Saturday, December 20 at 7:00 pm in Cleveland Public Theatre’s Parish Hall and on Sunday, December 21 at 2:00 pm in University Circle United Methodist Church.

The opera tells the story of a boy, Amahl (Eugene Gurary), who can walk only with a crutch. He lives with his mother (Andrea Anelli) in Bethlehem during the first century. One evening they receive visitors, the Three Kings (Kaspar, Timothy Culver – Melchior, Brian Keith Johnson – Balthazar, Cy McFarlin) and their page (Peter Bush), from a far-away land on a journey to meet a newborn child.

“We had great audience response to our production of Amahl in the past, so we’re pleased to be able to bring it back again this season,” COT artistic director Scott Skiba said during a recent telephone conversation. “We’re hoping to establish Amahl as a yearly company offering. We’ve made some changes with this year’s production, such as investing more in the costumes, and we’re partnering with the Chagrin Studio Orchestra under the direction of Steve Eva, for Saturday’s performance.” Sunday’s performance will be accompanied by pianist Lorenzo Salvagni.

Written by Gian Carlo Menotti with an original English libretto by the composer, Amahl and the Night Visitors was commissioned by the National Broadcasting Company and was first performed by the NBC Opera Theatre on December 24, 1951 at the network’s studios in Rockefeller Center. Amahl was the first opera specifically composed for television in America.

As the stage director, Skiba says that when you begin to study the opera’s score, it quickly becomes apparent that it was originally produced as a television show. “It’s fun to think about that as well as what a genius Menotti was in terms of creating the action for a camera. The action needs to be tight, and in a small theatre that works well. And the music is so beautiful.”

For anyone who is familiar with the opera, Skiba points out that this production is still a bit truncated. There will be no chorus or dancers, but not to worry: true to the company’s tradition, they always figure out how to do what they do at the highest level.

An important part of COT’s mission is to foster partnerships with community organizations. Donations received during Saturday’s performance will benefit City Mission Cleveland. Donations received on Sunday will benefit Dream Days. “Because of the spirit and holiday message of the opera, the collaboration with the City Mission and the Dream Days organization, combined with free admission, the cast members are singing for a reduced fee which is their gift as artists to the community.”

What else does Cleveland Opera Theater have in store for Northeast Ohio opera lovers? “We hope to tackle some of the projects that we’ve had on the back burners for a while,” Skiba said.

The Cleveland Orchestra’s second performance of the new season on Sunday afternoon, October 17 at the newly renamed Mandel Hall at Severance Music Center was just such an occasion. If the ensemble’s return to public concerts under the baton of Franz Welser-Möst wasn’t enough reason to light a bonfire, the Cleveland debut of a new work written for one of the Orchestra’s most popular soloists, and the swan song of one of its longest-serving members added extra fuel to the celebration. END_OF_DOCUMENT_TOKEN_TO_BE_REPLACED

Cleverly, CityMusic’s latest concert led listeners through these changes one step at a time. “Musical Matrix” took transformation as its theme, and each piece on the October 2 program at the Maltz Performing Arts Center (the second of two performances) put its spin on the subject. END_OF_DOCUMENT_TOKEN_TO_BE_REPLACED