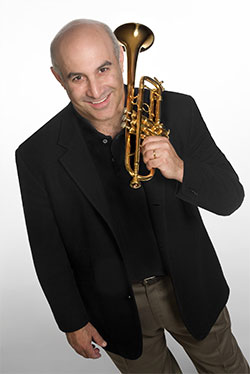 Sachs, who joined the Orchestra in 1988, said that the concertos by Haydn and Hummel were written at a pivotal moment in the evolution of the trumpet. “Until the late 18th century, trumpets had no valves, so the only notes available were the ones in a certain harmonic series. You couldn’t play a diatonic or chromatic scale unless you played very high on the instruments, which is why a lot of Baroque music is up in the stratosphere.”

That changed when Anton Weidinger began experimenting with the instrument. “Weidinger was the top player in Vienna in the late 18th and early 19th century, and he created the keyed trumpet, which looks like a bugle lying on its side with saxophone keys. That allowed the instrument to play diatonic and chromatically. This is the instrument that Haydn wrote his concerto for in 1796. And it was revolutionary because it was the first time in history that a trumpet could play the first three notes of the concerto — E-flat, F, and G — in that range, and in that sequence.”

Hummel composed his concerto for the same instrument in 1803 and it was premiered by Anton Weidinger on New Year’s Eve. Sachs noted that while the Hummel shares many similarities with the Haydn, the Hummel pushes the instrument even further.

“For a long time the piece languished in a library in London which had a lot of Hummel’s manuscripts,” Sachs said. “It was found in the 1950s and brought to the U.S. by Armando Ghitalla, who was principal in Boston, and who made the first recording of the piece with Pierre Monteux.”

The concerto was originally written in E major but ended up being played in E-flat for many years. “Ghitalla took the piece to Robert King Music, until quite recently the biggest distributor of brass music. King thought that if he put it in E-flat, a band key, it could be played on a B-flat trumpet, which most people were using, and more people would buy it. From that point people played it in E-flat — in fact the last time I played it with the orchestra, I played it in E-flat.”

For this week’s performances, Sachs will be playing the concerto in its original key of E. “I went to an old friend of mine, Bob Malone, who is the head trumpet designer for Yamaha instruments, with the idea of making me an E trumpet. He ran with it and created a couple, and I chose the better of the two. This gives me the opportunity to play it in the original key.”

Sachs is also part of the Hummel lineage. Hummel hired trumpeter Ernst Sachse to play in his orchestra. When Sachse retired, one of his students took over and taught the famous trumpet player Max Schlossberg, who taught James Stamp, one of Sachs’ teachers. “It’s a little loose but there is a bit of a family tree dating back to someone who played under Hummel.”

In addition to playing the Hummel in its original key, Sachs also looks forward to reuniting with conductor Nicholas McGegan. “Nic is lovely. Besides being so intelligent, thoughtful, and a great musician, he is just a lot of fun to work with. He’s historically informed but finds ways to apply that in a modern setting with modern instruments. I started playing this concerto when I was 15 or 16, but I’m sure I’m going to learn a lot doing it with Nic and gaining from his insight.”

Jackson began the program with a recitation of Langston Hughes’ poem “Helen Keller” — the first of five poems by Hughes that served as interludes between each piece on the first half. END_OF_DOCUMENT_TOKEN_TO_BE_REPLACED

Pianos with pins and tape on strings, a bass drum and tam tam, crotales, Almglocken, and vibes. Microphones were hooked up all around the instruments. The feed was sent to speakers around the room. Lighting designer Nicholas Houfek hung incandescent globes over the arrangement of instruments from thin black wires stretching across the beams. END_OF_DOCUMENT_TOKEN_TO_BE_REPLACED

From the podium, Elim Chan set an ambitious tone for the evening. The rising star conductor, here in her Cleveland Orchestra debut, has a commanding style, and every twist and turn in Saturday’s performance tracked closely with her baton. END_OF_DOCUMENT_TOKEN_TO_BE_REPLACED